I would say that is fully scaled to me

Thanks guys I'm going to do a blog post featuring that fish so wanted to get my facts straight first, fully scaled it is.

Definately not a standard fully Scaled Common; It’s just a Fully scaled ‘Mirror Carp’, just at the other end of the ‘scale’ to a leather Carp which has no scales..

Since it has a bare patch, it's nearly a fully scaled mirror carp .

Probably the best looking of the carp variants for me, although a nicely coloured proper linear comes close.

I had this dark fully scaled mirror a couple of years ago...

I usually think commons look better as they tend to hold their shape better whereas mirrors can go a bit round which combined with the lack of scales makes them look a bit lardy but both those mirrors with all the scales are stunners ??

Silverfisher said:
I usually think commons look better as they tend to hold their shape better whereas mirrors can go a bit round which combined with the lack of scales makes them look a bit lardy but both those mirrors with all the scales are stunners ??
Click to expand...

Depends on their lineage.
I fish a water where the mirrors are slow growing and long in shape. 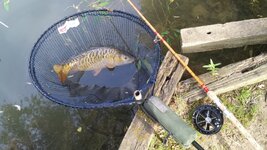 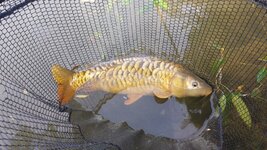 Had this a few years back... the fully scaled carp are usually visually stunning and scrap well... I did hear that scaled fish like commons scrap harder... certainly in my experience fully scaled fish give a harder fight...

Lovely fish that. I’d say in my experience commons fighter harder although that might be because those I’ve caught are better shaped than the mirrors I’ve caught. I wouldn’t be surprised if a similarly elongated mirror fought just as well.

I definitely agree that commons fight harder than mirrors.

Technically there are four genetic strains of Galician carp (the most common race of carp):
The s and n being alleles that make up a gene.
All originate from the original common carp.

There are other strains of carp in UK at a few selected specialist waters being Dinkelsbuhl, Italian, Frame, Aischgrund, Royale and the Rospha.
Rospha are unique in that they only have one genetic strain being common (IE no known mirrors, linears or leathers excist).

The Galician strain was one of the first varieties of carp to be introduced into the country, after the Romans introduced the Wild Carp. It's a strain renowned for it's longevity, averaging 40 to 50 years, and often living a lot longer. It's not especially fast growing, but given time and the right conditions can grow to over 50lbs. Most of these carp were introduced by Donald Leney, including the famous specimens in Redmire Pool. The reason they were introduced to our waters, was that they were thought to be good at eating weed, so keeping trout lakes clear of excessive weed growth. But it turned out not to be the case.One interesting thing with Leney Galician carp, is that without selective breeding, more and more Commons are produced with each generation, and Mirrors, Linears and Leathers become very rare. This happened at Redmire, where the older fish that could be identified as being the offspring of the original Leney stocking, were nearly all Commons. When they restocked the lake, they returned these fish, along with some Mirrors, Linears and Leathers of proven Leney provenance. Thankfully a hobby fish farmer had been given fish by Mr Leney, and had dedicated his life to preserving the strain. A problem at Redmire was that an ornamental pond at Bernithon Court, sprung a leak and they found the resident Ghost Carp floundering in mud, and they rushed the fish down to Redmire to save them. Unfortunately the Ghosties then hybridised with the Leney carp. So when the lake was restocked, only fish that could be identified from before the ornamental pond incident, were able to be guaranteed Leney's and be returned.
In most carp waters today, including a lot of commercials, it's the Dinkelsbuhl variety which we find. These are the fish that often look fat and misshapen. They are often called Simmo's after the owner of the Fisher's Pond fish farm in Hampshire, Mark Simmonds. These fish only live to about 20 or 30 years, but grow massively, up to about 70lbs if conditions are right. So it's possible to have a big fish in a lake very quickly. And with a relatively short lifespan, a lot of repeat business for the fish farm. 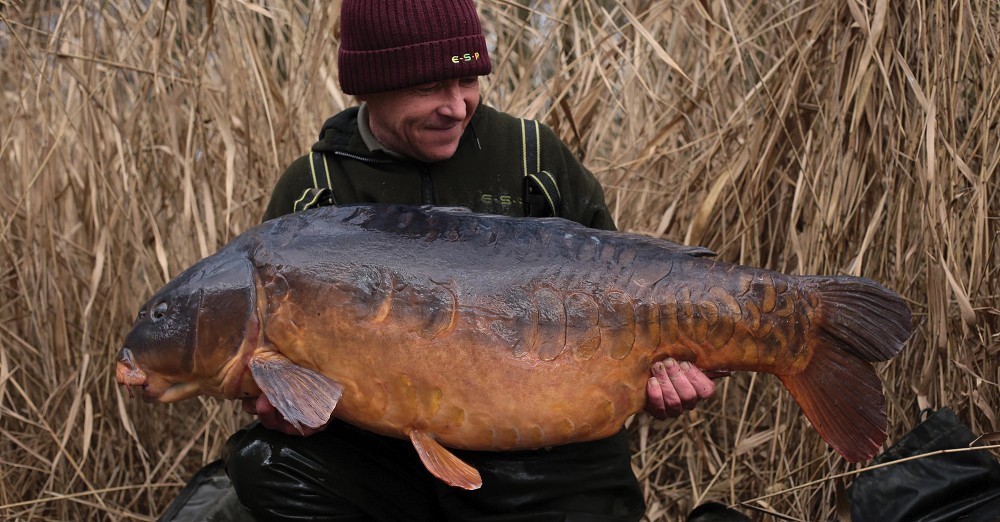 That's a very informative link. I used to live near to the Fisher's Pond fish farm, and originally they were producing carp for the table. This might have been because Southampton and Eastleigh had a large Polish community, so plenty of customers. Carp was also on the menu in the Fisher's Pond inn. I've met Mark Simmonds, the man behind 'The Simmo', on many occasions, as he ran the lakes at Broadlands and Longbridge Lake. He was also the angling correspondent for the Daily Echo newspaper, which had a page dedicated to fishing in the sports pages, every Friday. I think in my previous post, that I said he owned the Fisher's Pond fish farm,but I think he just worked there, and John Paton owned the fish farm and the Fisher's Pond pub, back in the early 1980s. It was Mark Simmonds who made Fisher's Pond fish farm, the go to place to buy carp from for stocking in the early 1980s. Back in the day, the actual lake at Fisher's Pond, didn't have any of the later strains of carp in it, but was full of hard fighting Wildies. I fished it once back in 1983. I'm not sure if the lake is still allowed to be fished or if it is still just Wildies in there. I think the Dinkelsbuhl carp is probably still bred for the table, because of it's fast growth, but it's the cross between the Galician and the Dinkelsbuhl which is probably the main fish for the lakes these days. Fisher's Pond fish farm seem to only supply fish for stocking these days.