So this weekend I hadn’t planned to fish til tomorrow when it’s supposedly a bit warmer and I’ve got nothing else on but as it’s so nice today I decided to spend my free morning on my local commercial which was my first time there in about a month. Those who have read my reports on my few sessions on it in February and March will know it usually produces decent numbers of big skimmers, small carp and acceptable roach along with bouts of nuisance rudd to wag and mag so seeing as the weather is still hardly any different now to then I was expecting the same today. However it was like a different place today!

I fished from about 8.30 til 12.30 and it was ruddy hell! They’ve been a pain at times on previous sessions but today was next level just hordes of half ounce to ounce and half little blighters. First half of the session on wag and mag on the drop to full depth like I’d done on previous sessions was hopeless with nothing but Rudd save for the very occasional roach and the pellet line I’d fed produced zilch save for one carp. By that point I’d accepted I was never going to get through to the skimmers and roach so set up a heavier outfit to target cruising carp shallow. That sort of worked as over the rest of the session I added a steady flow of carp amongst more Rudd both on that method and occasional goes back on the original method. Final tally was I think 6 roach, 9 carp and probably at least 75 Rudd so god knows how many I’d have had if I hadn’t actively tried to avoid them. Given I was sight fishing the carp I was able to pick off bigger ones than I’d fluked there silvers fishing previously so ironically I probably had as good a weight as any session I’d had there at probably getting on for 50lb despite it in reality being the worst session I’ve had there this year. Probably could have caught quite a bag of carp if I’d gone down that route earlier but in hindsight I spent too long trying to find the proper silvers.

Tackle wise after mostly using my 13ft acolyte ultra this year I gave my 13ft CR10 #1 a run out today but paired with the same 2500 shimano Sahara RD loaded with 3lb maxima to a 1g drennan loaded crystal insert waggler. I had stepped up from the 18 to 2lb drennan silverfish hook to nylon to a 2.5lb but I doubt that had put the proper fish off as I couldn’t get a bait down to them anyway. Most fish on that set up came single and double red maggot over loose fed maggot and sensas black groundbait (different to my usual frenzied hemp but again doubt it made a difference) and 4mm and 6mm pellets over feed of the same. The heavier shallow set up was the 11ft JW 1.25tc Avon paired with a 2500 daiwa ninja FD loaded with 5lb hyper sensor to a drennan visiwag (of which I didn’t check the size but was bigger than the crystal insert) to size 16 to 3.5lb drennan wide gape hook to nylon. I didn’t feed at all on that set up as it just attracted Rudd so just pitched bunches of maggots in front of the cruising fish. They wouldn’t look a pellet shallow at all even when fed which didn’t really surprise me given I’d only had one off the bottom doing that. First time I’ve used the 1.25tc in ages and was quite weird as a 5lb carp on that doesn’t fight much harder than a 5oz roach on the acolyte!

All in all after some pretty decent sessions on the venue this year today really was hard work. Still not a bad session though as plenty fish caught in lovely weather so can’t complain and given the place has mostly fished much better on the previous sessions it was due a bad one. No one seemed to be doing as well as on previous trips so must have just been one of those days. Back out again tomorrow but not sure where yet.

Forgot the swim pic today so just a few of the carp. 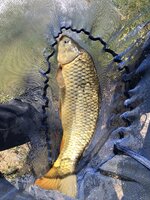 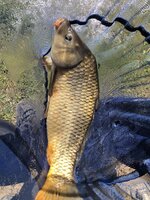 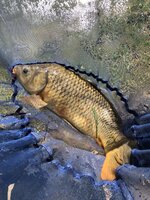