With the mild weather yesterday the venue for the afternoon was Froggatts Pools. This has five pools, four with mixed stocking but dominated by carp and F1s and a specimen lake with 20lb+ carp and catfish. 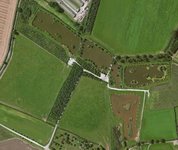 I’d intended to fish the east end of the mixed Lodge pool (second from the left) so I could lob a method feeder to the back of the long island to my left. I stuck with this plan despite the strong wind blowing directly into that end of the pool as with the recent mild nights I expected the margins to fish well on the float rod, especially in the last hour or two of light. The swim picture about sums up the weather, grey, windy and with some spells of that annoying mizzle. 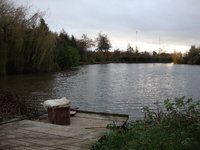 The first cast with a ground bait method feeder and a chocolate orange wafter resulted in the tip curving round after a few minutes and a 3lb carp was in the net. That set the tone for the rest of the afternoon, most casts resulted in a bite and a mix of seventeen small carp and decent F1s all in the 2-5lb range were landed at regular intervals. The biggest fish were a pair of 5lb F1s, the better looking one is pictured. 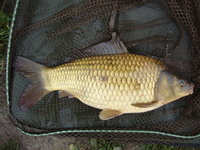 The float rod in the margins was unexpectedly slow throughout, even at the end of the session. Just one small carp from the last cast and two F1s, plus five 2ozish tiddlers (roach, rudd and perch).

A disappointing lack of the bigger carp but the number of smaller fish resulted in a total of about 60lb.

The swims on the specimen lake can be booked for 12 hour or longer sessions and it now has two lodges on it. Although the wooden swim platforms are good the banks and access paths are very muddy at this time of the year. There is also a constant aroma and fan noise from the chicken barns in the north west corner that you soon get used to!