"Ooops I think I compressed a bit too hard"
L

"Godbar,why am I the one that always has to blow the head?"

Now that is taking gender neutrality a bit too far, to fall out with your own body.

Eh up Dave looks like we've got a rugby player here, doesn't know when to quit.

Boris has taken it badly

Tis but a scratch

There's a whistling coming from the throat.

Must be a member of the labour party..... they're headless!

OK you can stop now. I'm going to call it.

I'd better get the gorilla glue out.

"calm down calm down, no need to lose your head"

"look, we need to get this perfect i don't want that bitch accusing us of anymore racism"

I told you not to blow as hard

Not a caption but a little story from the past.
I went to a football charity do on Anglesey years ago and at the time Yugoslavia had broken up and Nato were trying to keep the peace.
The comedian at the show was Mickey Finn and a bit into his act he asked "were there any Bosnians in" and oddly there was, one of the team it was raising money for was originally from there so he left it at that but later he asked the same question and got the same reply so says "its a shame I had a great joke for you but if he is really Bosnian I will tell you another one not as good" As the crowd got drunker, it was free beer they spoke to "Roman" the bosnian import and he said he was happy to hear the joke and if it was good he would laugh like everybody else.

Three nato soldiers are on guard duty and one says he feels really horny and would the other two mind if he went out to find some company. The other two were not bothered so he left, couple of hours later he returns with a big smile on his face so the other two ask what had gone on.
" I went across town and everywhere was shut but then I remembered the hospital so I headed over there and sure enough i found this nurse,what a fabulous body really fit and she was wearing suspenders so I had a couple of great shags then headed back here"
One of his mates asked if she was pretty and the other asked What colour hair ? to which he replied "I dont know I never found the head."
The team looked at Roman and he burst out laughing so everybody else did. 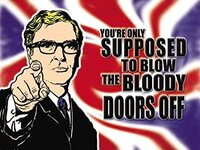 Oy you!!
We'll have no stereotyping on here.