Has anyone tried the coarse fishing in France and have any advice or recommendations they can pass on?

We've toured in the campervan a few times now. We always park in the wild or at free Aires (hate noise) and often found ourselves next to canals and ponds that looked really good.

We're thinking of going for a week this month and not sure where to start.

I have fished in France on holiday for over 30 years. One of my blog posts deals with my experiences.

As a change from methods & tactics I thought I would share some of the fishing I have done on holiday in France. I am talking about family ...

The first thing to know is that you need or should have a rod licence. They are much more expensive than in England and are regional. To fish any region other than the one you originally bought for you need to pay a small extra fee. Licences from tourist information offices and possibly Decathlon stores as well as tackle shops (if you can find one). Ask for a "Carte de Peche". One week will cost approx. €30.

It annoys me that despite being "in" Europe my English licence is not valid for short trips in the rest of the community. I can drive my car on English documents but not fish. Crazy set of priorities.

I have normally looked to see if others are or have fished a water and have never had a problem. The French seem to regard any water as fair game. Though many towns and villages have designated lakes for watersports including fishing. The signposts for these is easy to spot or you are looking for an Aire de Jeux. Basically if it looks fishable have a go and if asked to stop do so with good grace and apologies. Commercials (Carpodromes) do exist but are few and far between.

Most super/hypermarkets carry tackle and bait. Maggots (asticot) are generally used as hookbait only and can be found in the tackle section in small tubs in a fridge along with worms etc. I take my own groundbait as most of the supermarket stuff is poor by my standards. It can be improved by adding flavours such as vanilla (from the home baking aisle) or ground up cat biscuits (croquette du chat). I find though that sweetcorn is as good a bait as any most of the time for many species.

I have to give a word of warning though about touring and where to overnight. People have been robbed in Aires and in the wild. The method is to introduce a gas into the camper or van that renders the sleeping occupants unconscious (or worse, the criminals don't care). You wake up next morning groggy and robbed. The advice is always use campsites. Also beware of being flagged down by a passing car either pretending to be unmarked police or indicating there is a problem with the vehicle. Always carry on to a safe and populated Aire or town if this happens.
S

Excellent information. This covers most of the questions I have. Thanks for replying.

My task now is to find where best to head for before buying the necessary licenses. I had it in my head that a holiday licence (1 week at 30 euro) was an all department permit so thanks for the heads up.

As for safety, I'll reply to the new thread about France that has popped up, but rest assured we have spent a couple of months living in the van across Europe and have developed a sense for when a place isn't right.
S

We're on our way to the Aisne region with an aim of going on the federal ponds and canals. I'm quite happy fishing for silvers and perch all day but been advised to expect zander, big carp and maybe catfish. I'm satisfied with just getting away from our rubbish weather for a bit.

Have been very surprised how well organised the whole process has been. I could write a book about the utter confusion I have experienced in this country just organising a couple of days fishing in an area.

In contrast, despite not being able to read French I've managed to book permits, find out everything I need to know and even have a 108 page booklet to show exactly where we can fish and what to expect. For 30 euros its a steal. I have spent more than that on a days fluff chucking on a dour loch.

Will update with how it goes

Suilven said:
We're on our way to the Aisne region with an aim of going on the federal ponds and canals. I'm quite happy fishing for silvers and perch all day but been advised to expect zander, big carp and maybe catfish. I'm satisfied with just getting away from our rubbish weather for a bit.

Have been very surprised how well organised the whole process has been. I could write a book about the utter confusion I have experienced in this country just organising a couple of days fishing in an area.

In contrast, despite not being able to read French I've managed to book permits, find out everything I need to know and even have a 108 page booklet to show exactly where we can fish and what to expect. For 30 euros its a steal. I have spent more than that on a days fluff chucking on a dour loch.

Will update with how it goes
Click to expand...

It's not an area that I am familiar with. I would be very interested in how you get on.
S

Tyecon said:
All the best would be interested to know more about the booklet and how to obtain one
Click to expand...

The booklet is for the one department and contains rules, contacts and maps of the area, points of interest etc.

On the main permit site you can visit the page below to download pdf books/guides on any department :

Each department also has its own website in the format www.peche##.fr where ## is the number of the department. Some sites are better than others but most have maps, some even have all the info loaded on to Google maps which is perfect.

The amount of info is overwhelming. Using chrome allows you to translate everything to English and works well.

That's great thanks for that have a great trip
S

The drive down from central Scotland was long thanks to the A1M being shut randomly with long detours down country lanes, but a nice choppy sail woke me up. 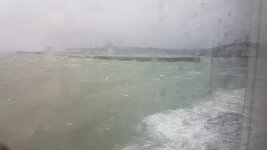 Arrived at a very beautiful Plan d'eau Artemps - a sort of association fishing lake. It is divided into a sort of snake lake with silvers, carp and pike, and a larger 'carpodrome' pond seperated by grilles to prevent the fish from mixing. 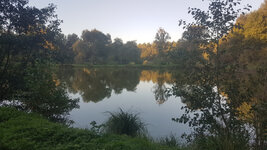 We spent the full day here, and it was surprisingly busy with about 20 fishermen using a mix of poles, carp methods and lure fishing. However we didn't see any sign of fish life at all on the main lake. We tried wagglers on and just off the bottom using worm, maggot and sweetcorn, and put out cage feeders but didn't get so much as a float wobble. In my opinion either it is heavily overfished or the population is being kept quiet by some large pike.

We gave up and tried the carp lake, where after an hour or so a very bright looking fish fell for a feeder with a krill pellet. 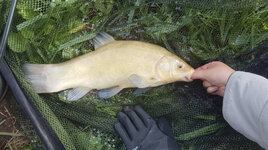 This was the only fish I saw being caught by anyone the entire day. We gave up soon after and headed back to a spot we wanted to return to on the canal de la sambre à l'oise that we have never fished. It is closed to navigation and as such is quite weedy. 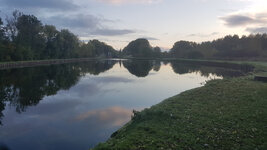 We had a better time here, as soon as we arrived the water was boiling with small fish. After a bit of feeding we got a good swim going with roach and perch every chuck. Eventually we got into some larger and very pretty looking perch. 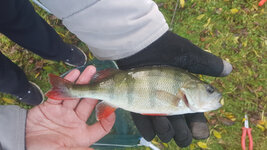 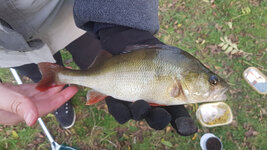 Just as we were packing up one of the feeder lines started screaming off with this chap.

We had a shot at the Canal du Saint Quentin but thanks to some high winds and what seemed like a very strong undercurrent in the canal, presentation was an absolute nightmare and we only managed a few average sized perch. We found a lot of French folk doing the same as us, camping wild and fishing out of the back of the van. 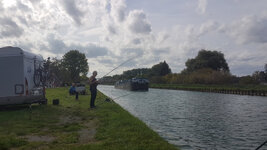 We spent much of the week going round the Federal Plans d'eau (association lakes) but never saw any fish life in any of them, despite large numbers of anglers giving it a shot. Just as we were leaving one angler pulled out a carp about the size of himself, which got knocked on the head before he phoned all of his friends to drive round for a look. Perhaps that's why there's not many fish to be seen!

In the end we returned to the canal de la sambre à l'oise for some very pleasant and relaxing fishing for a couple of days.

All in all a bit disappointing, but bearing in mind we've only been coarse fishing a few months and that we had no local knowledge it wasn't a total waste of time. If I was to return I'd limit myself to fishing the canals as they're very easy to park up beside and spend the night, as well as enjoy some relaxing and productive fishing for silvers and perch. This is far more up my street than waiting it out days for a trophy.

In honestly we probably passed more productive places on the way down the A1M, but at least we returned with a van full of belgian chocolate and decent wine
S

Forgot to mention that Aquapeche in Tergnier is worth a shout. Everything you need and they speak English, which helped when our denros got cooked by the 25 degree heat one day and we needed more bait.

Sounds like you had a lovely trip and wet your rod more then once win win ?

What's in the bottom of your River or Pond?
2 3