After reading @OldTaff tale of going fishing and realising that unless I got of my arse I was destined to spend another day welded to my chair and trying to avoid having to do wife organised things. As I got a new box for xmas, and a flask I decided to test them both out. First up was loading the new box into the car, it fitted quiet well, the footprint is bigger than my old one but it goes in and the other bits (half a tackle shop) pack round it fine. The only issue I can see is it needs a small crane attachment to lift it up, because it weighs a fair bit.

I was lucky to still have a couple of pints of red's that had been hidden in the back of the big fridge in the garage and not discovered over yuletide by the enemy. I quick stop at local sainsbury's for some bread and then drive the 3 miles to the local club pond. Opened the lock, no one else in sight and parked up, quick look at where I fancied and then of to unload the car.

Back in the car and drive home to collect the rods/pole which I think important to the success of a fishing trip. Total ridicule from both wife and son, many comments about my age and mental state, all of which will be dealt with later.

After getting to my swim eventually I set up, new box is great, really stable and love the spirit levels , attached all the bits i needed and the set up a feeder and couple of top kits. 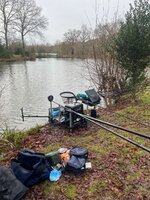 To be honest I wasn't expecting much, just wanted to watch a float for a couple of hours. In time honored tradition it rained, not the nice gentle rain we used to get when I was young, this was full on 50mph bucket sized drops and mostly going sideways. Anyway after 15mins the first of 20 or so roach attached itself to the hook, these were interspersed with the odd chunky perch. Just kept feeding and catching. An hour and a half in I decided to have 10 mins off and test the new flask, so fed a big pot of groundbait and maggots on one line and poured a coffee. Amazing the coffee was hot, and actually drinkable so I sat there and let the world drift by. 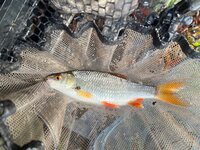 1lb 4oz on the scales and really put up a fight, I re-baited the hook and went back in ,

Look what came out next 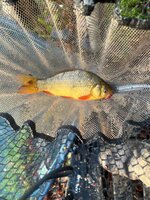 15oz Crucian, we stocked these at 4oz last year so nice to see they are growing. It is one of the great things about having a lake with no carp in it, you get to catch some lovely silvers.
This continued for the next hour and a half, roach of a good stamp and the odd bar of gold.

Ended up with this 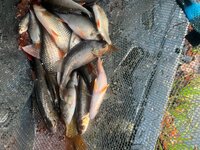 25 fish on the counter .
More importantly I went fishing and the fish were great. Going to sleep well later.

Woo hoo I am finally an inspiration

Well done matey. Great report and you even remembered photos for Total.

. Great net of fish that.

Well you forgot the rods and I forgot the bait. I think we need a middleman if we are ever going on a trip together

Great report and pics though Mike

MunchMyStump said:
Well you forgot the rods and I forgot the bait. I think we need a middleman if we are ever going on a trip together

Great report and pics though Mike
Click to expand...

I think @TRFC2000 would fit the bill, he forgot the alarm at the Fur and feather

D
How Did It All Get So Complicated?
2 3