Exciting Opportunity and Really Got the Pike Bug!!

As February moved into march my mind began to be overtaken by the sound of a ticking clock as i could see the end of the pike season approaching and any opportunity to get out a fish for these fish was taken.

Early darts from work, annual leave taken and Sneaking out for two hours on sunday mornings before the family household woke up was just part of feeding my addiction to hunting esox lucius.

Two hours and two pike only jacks but was worth it for my first trip. The next trips saw me out on a social and it was a session where we really had to find the pike. We set out with a plan and it worked a treat at first but after the first hours we were hunting the pike out.

So many pike this year have been in the 9lb bracket and so it proved today. It wasnt until the last cast, well 20 minutes after we where supposed to be packed up to be precise that the best fish of the day came in a 10.5lb double.

I am also really proud to announce in this update some news that has been going on in the back ground foe a few weeks. I am pleased to announce i have been asked to appear at the opening of the new go outdoors store in shrewsbury opening this Saturday. I will be on the angling section and also providing a short q and A session during the day. An opportunity i am excited about if a little nervous.

There is also a opportunity to ask Ray mears a few questions who is opening the store, if you have any ideas or a question you would like me to aske please leave it below!! 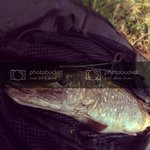 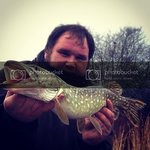 uploaded a few more pics to my account from these sessions: 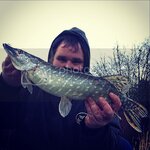 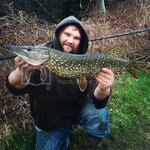 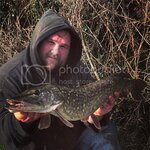 I
Pike and perch on the Mon & Brec canal

A fish at last!

Luring on the river.