Ed Woodward, one of the driving forces of this proposed super league (!) has stepped down from his position at Man U 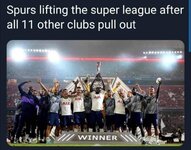 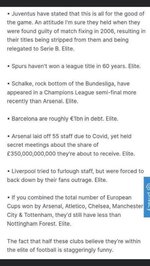 CITY out of it thank God

Remaining 4 English clubs expected to announce their withdrawal from the proposed ESL.

Fit and proper persons test my arse....What's that all about?
L

All withdrawn now then and the beauty of this is the fans are now left with absolute clarity that the majority of club owners who considered doing this were either in it for themselves or afraid of missing out.
Italian & Spanish football is on it's ar$e financially so you can why they were so in favour.
United and Liverpool have just got owners who need to recoup their investments and then show healthy profits.
Chelsea & City - along for the ride.
Arsenal - living in the past now and cannot afford to become more detached from the top clubs
Spurs - bonus ball out of the bag and it could have easy have been Huddersfield Town - they were a "big" club once.

No wonder they blacked balled the Newcastle takeover. Wouldn’t want Newcastle becoming richer than some of them and maybe taking their spot in the super league

Will this affect some supporters and maybe stop them supporting their team or stop them going. ?
Heard 1 Man U fan on radio last night. 40 year season ticket. Not going again and going to go watch Salford

Small victory for fan power at domestic level and maybe some rich owners twitching a bit that they cant take fans for granted, but the real winners are UEFA. They are sneaking in a 36-team Champions League on Monday with 225 games & VIP passes for two ESL-type clubs. They're bringing the joint venture with a £5bn private-equity stake in.
Its still all about the money. 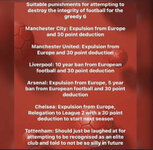 Stolen from another forum...

I don’t think the fan power was the issue. More the threats from Boris

As football supporters we don't always show the greatest amount of intelligence, or more likely choose to ignore the truth of the matter. My club Chelsea, have a supporters trust that have this morning demanded the removal of the chairman Bruce Buck and one or two of his aides. Do they really think this was his decision to join this elite franchise? No, it was the man at the top, Roman and there's nobody calling for his head, I wonder why? Same can be said of Woodward's departure from Utd, these guys are little more than the spokesman for the owners.

Or maybe they are left to run the club on behalf of the owners. I’m sure most owners of the big 5 are clueless when it comes to running a football , in terms of football rules and which league is which. Could be that the chairmen miss guided the owners ??????

dry nets said:
Or maybe they are left to run the club on behalf of the owners. I’m sure most owners of the big 5 are clueless when it comes to running a football , in terms of football rules and which league is which. Could be that the chairmen miss guided the owners ??????
Click to expand...

That could well be the case but in Chelsea we have one private individual in Roman who's been at the helm now for 18 years, I cannot believe he doesn't understand the culture or the backlash this was going to produce. Maybe he has relied on his staff to do the due diligence but that doesn't really excuse him of blame. As for the other owners? Hard to imagine they have a clue about the game and its roots, history and culture.

That's what I think. Signed up just in case as they didn't want to be left behind. Those 2 have no problems lashing out big money on players and wages.
Whereas Liverpool, Arsenal, and Spurs just can't compete financially with them. Same is true with the Italians and the Spaniards. Real and Barca both spend and then rely on future income.
The old european elite are frightened of being left behind by the new super rich such as City and PSG. That's what this was all about. PSG must have been laughing their balls off watching this unfold and fail

They need to be tuff on the spending rules. In the long run it’ll save real/Barca etc from going bust but needs everyone to be fair. If a player is out of reach leave the greedy sod where he is. Liverpool have bought good players cheaply, shows it’s do-able

F
confessiovs of a leeds sympathiser

The 50 worst things about modern football