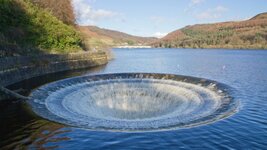 
England is facing water supply shortages by 2050 unless rapid action is taken to curb water use and wastage, the Environment Agency has warned.
Its new report says enough water to meet the needs of 20 million people is lost through leakage every day.
Population growth and the impact of climate change are expected to add to supply pressures.
The agency wants people to have a personal water target and has urged them to use water more wisely at home.
The study, the first major report on water resources in England, says that population growth and climate change are the biggest pressures on a system that is already struggling.

In 2016, some 9,500 billion litres of freshwater were abstracted, with 55% of this used by public water companies, and 27% going to the electricity supply industry.
But in addition to the 3 billion litres a day that are wasted through leakage, there is a considerable price being paid in terms of the sustainability of these supplies.
According to the Environment Agency, extraction of groundwater - the water beneath the earth's surface - is not at a sustainable level for 28% of groundwater bodies and up to 18% of surface waters.
A year earlier in 2016, unsustainable extraction meant that at least 6% and possibly up to 15% of river water bodies did not achieve "a good ecological status or potential".
Around 77% of chalk streams also failed to do that, with over extraction of water being responsible in a quarter of the streams that were tested.
"We need to change our attitudes to water use," said Emma Howard Boyd, the Environment Agency chair woman. 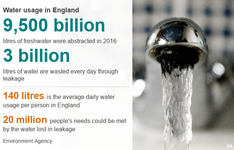 "It is the most fundamental thing needed to ensure a healthy environment, but we are taking too much of it and have to work together to manage this precious resource."
Addressing the questions of how much freshwater was being extracted, a spokesman for Water UK said water companies were tackling the issue head-on.
"The water industry works hard to protect the environment, and companies will set out ambitious plans later this year which should mean less water is taken out of our rivers," he said.
"We've also cut leakage by one third since the 1990s, but we know there's a lot more to do - which is why it's one of our top priorities."
The big questions going forward, according to the Environment Agency, are the impacts of climate change and population growth. 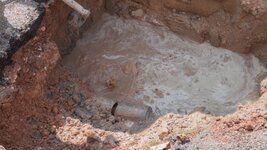 Rising temperatures will affect the timing and amount of rainfall that flows into rivers and replenishes groundwater supplies.
Although average summer rainfall is not predicted to change, more rainfall is likely to occur in large downpours in the future, increasing the chances of droughts and floods happening at the same time.
The report warns that reduced summer rain and increased evaporation might damage wetland areas.
Increased areas of stagnant water during droughts coupled with increased temperatures could see the spread of mosquito-borne diseases such as dengue fever and West Nile virus.
The population of England is predicted to increase to 58.5 million by 2026 - the report says that much of this increase is likely to take place in areas where water supplies are already stressed.
If no action is taken to reduce use and increase supply of water, "most areas will not meet demand by the 2050s" if both emissions and population growth are high.
Even low population growth and modest climate change "suggest significant water supply deficits by the 2050s, particularly in the South East".

The government has already suggested that an individual's water use be reduced, in its 25-year plan, published earlier this year.
On average, people use 140 litres every day in England. The Environment Agency says it will work with government and industry to establish a personal consumption target and come up with cost-effective measures to meet it.
"Industry must innovate and change behaviours in order to reduce demand and cut down on wastage," said Ms Howard Boyd.
"And we all have a duty to use water more wisely at home."
The report also highlights the differences that changes to the way we produce energy in England will impact on water supplies.
Investment in nuclear power and renewable energy will likely lead to much lower rates of abstraction and consumption by 2050, the study says.
However, if future energy scenarios involve carbon capture and storage (CCS), this would require much higher freshwater abstraction and consumption levels, as the technology needs extra water to function, and would also increase the amount of cooling water needed at conventional power plants to which CCS equipment is attached.

Nothing worse than a Mod not in control
After the Sun

They could save an awful lot of water if they put a great big plug in that ruddy great hole!

Jokingly, I said to my neighbour crazy Kristina yesterday, "seven sunny days in a row, we'll have talk of water shortages soon".
That didn't take long.

No anyone would think we are not surrounded in the stuff.... ?

Ain't the sea supposed to be rising? Can we not turn sea water into drinking water anymore?

Scooter, large scale desalination plants would cost a lot of money but once up and running we would not have to worry
about shortages and we could give our rivers a break, so why not?

Exactly we are only a relatively small island.

however I doubt that will fit in with the agenda of the both main parties regarding environment at present.

It’s a con to up the prices.

The answer is simple - move people to where there is water - Scotland!
G

Who lives on the other side? Dirty Diana?

Solar powered desalination could well feature in our future. We shall see

Problem with desalination plants is simply one of cost the water companies wont build them they are hugely expensive, inefficient and produce a lot of pollutants - they are typically about 50% efficient and therefore the waste product is basically sea-water with twice the concentration of salt. Generally this cant be discharged back into the sea the salt concentration will kill micro-organisms, hence affecting the whole food chain in the area.

In addition pure desalination water is highly acidic and is thus corrosive to pipes, so it has to be mixed with other sources of water that are piped onsite or else adjusted for pH, hardness, and alkalinity before being piped offsite.

They're built elsewhere because there's no alternative - in this country we've got plenty of water it's just in the wrong places.
There's a huge pipe from Keilder Water which can be used to 'top up' the Tyne, Wear or Tees during times of low flow - we always know when compensation water is injected into the Tees 'cos it's cold and acidic and kills sport on the river.
Going back to 1996 when some might remember there was a fleet of tankers driving up and down the A19 and A1 delivering water from Co Durham to the parched hinterland of west Yorkshire there was a semi-proposal then to increase the flow from the Keilder pipeline and then extract the water from the Tees and pipe it into the River Wiske, which is a small tributary of the Swale and, importantly, is only 10 miles or so from the Tees at Worsall where there's already a large pumping station which extracts water to feed Teesside industry.
Fortunately the EA put a block on that as the acidic nature of Keilder water would have knackered the Swale, Ure and Ouse.

Yorkshire Water have now constructed pipelines to link together reservoirs in different parts of their area and also pipes that enable them to access the, almost, limitless reserves held in Northumberland and Durham - Keilder and the half dozen reservoirs in the Tees Valley - so it's unlikely we'll see standpipes on the streets around here in the near future.
When it comes to leakage the amount lost can partially be blamed on OFWAT - they give the water companies targets regarding how much leakage they must prevent in any given year. Importantly they also set figures which dictate if the leak is cost-effective to actually fix - e.g. a leak that might only amount to a milk bottles worth a week but cost five grand to fix would be ignored - but if it could be fixed for £200 it would be. If OFWAT want to see the water companies fix more leaks they'll have to up their target figures and lower the cost-effective price threshold. That'll mean more holes in the ground, it'll also mean more staff to dig all those holes. More staff will cost more money, they won't cut the shareholders dividends so guess who'll end up footing the bill?

And don't forget we don't have a shortage up here as it is but we'll still end up paying more for Northumbrian and Yorkshire Water to fix leaks that don't really need fixing.

having seen that "hole in the water" up close I can tell you it's terrifying!

Is this really the EA’s purpose?

P
At what point am I 'dry' after a burst pipe?