Withgill Farm and Wilson’s Contractors Ltd from Great Mitton, near Clitheroe, Lancashire, have been prosecuted by the Environment Agency following a pollution incident where farm slurry polluted the River Hodder. 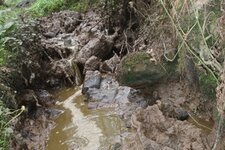 09th October 2019
Withgill Farm and Wilson’s Contractors Ltd both pleaded guilty at Blackburn Magistrates Court yesterday to negligent culpability and harming the environment in April 2017.
Wilson Contractors Limited (trading as Wilson Farming) had spread slurry on behalf of Withgill Farm which is one of the largest dairy farms in the UK. Both companies were fined £11,500 and each ordered to pay £4,063 in costs and a £170 victim surcharge after the Environment Agency brought the case to court.

Following a complaint from the public, Environment Agency officers investigated the incident at Withgill Farm, Great Mitton near Clitheroe, which is bounded by the river Hodder to the west and the river Ribble to the east.
Environment Agency officers found that a significant volume of slurry from a dairy herd had entered a field drain outlet at the farm and flowed into a small stream, leading into the river Hodder – a river well known for its salmon fishery. The Hodder was discoloured and smelled of slurry for several kilometres and this continued beyond its confluence with the river Ribble. The Ribble at Lambing Clough near Dinckley, over 7.5 km from the entry point, was deemed unfishable by anglers.

The next day, Environment Agency officers saw that an earth dam had been built across the end of the stream to prevent further pollution and witnessed contactors tankering slurry away. Below the dam, the stream had almost dried up and slurry was no longer entering the river, however, the river was discoloured heavily downstream of the confluence with a distinct cloudy plume extending into the main channel.
The court heard that the River Hodder’s ecology was largely unaffected by the incident, however, there was significant impact on amenity, on the River Hodder and the River Ribble.

Jackie Monks, the Environment Agency’s Environment Officer, said: “Pollution incidents such as this can cause distress to local communities, reduce water quality and spoil ecosystems.
“As this prosecution shows, we take tough action against any company or individual who causes significant pollution and damage to the environment and we hope that these fines act as a deterrent and help us better protect the environment and the public in the future.
“This incident could have caused major harm to the fishery in the River Hodder and River Ribble, however, we believe that because it happened during very cold and wet weather, it prevented a major fish kill.
“Environment Agency staff respond to pollution incidents 24/7 to contain pollution and protect water quality. We investigate pollution incidents to find the source, stop the problem and understand how best to reduce any impacts on local communities and the environment. We would urge anyone who notices pollution to land or water to call our hotline: 0800 80 70 60.”

The companies refused to cooperate with the Environment Agency’s investigation, however, did implement works to try to remedy the problem as the contractors constructed a dam and tankered the slurry away.
The court heard that Wilthgill Farm had received a previous conviction, two cautions and a number of warning letters - all for water pollution offences. Wilson Contractors Limited had no previous convictions.

The River Hodder is a county biological heritage site which rises in the Bowland Fells. It then flows approximately 23 miles to its confluence with the River Ribble, of which it is a major tributary. The catchment falls within the Forest of Bowland, a designated Area of Outstanding Natural Beauty. The River Hodder is a highly valued salmonid fishery and, together with the Ribble, is very popular with anglers.

Environmental incidents can be reported to the Environment Agency 24/7 on 0800 807060, waste crime can also be reported anonymously via Crimestoppers online or on 0800 555111.
W

You make a valid point Owly. The EA only get back their actual prosecution costs, ie, the legal bits of paying solicitors etc to take and prosecute the case through courts. The EA don't get back their staff time costs tracking, finding and gathering the evidence for prosecution. So in this case the EA get back the £4000X2 legal costs while the Treasury gets a "free handout" of £11500X2.
The same applies to prosecuting unlicensed anglers.
Seems wrong to me.

I suppose ultimately they do get some of it back as they are funded also by government budgets.
The fine monies goes to the treasury, the treasury supplies funds for the budgets, the EA get back some of what theyve put in

Shoulda been a prison sentence

So again they get off with paying a paltry fine which should have been £250,000 at least to get the message over.
W

Dave said:
I suppose ultimately they do get some of it back as they are funded also by government budgets.
The fine monies goes to the treasury, the treasury supplies funds for the budgets, the EA get back some of what theyve put in
Click to expand...

C'mon Dave, that's not a relevant point. On that basis I suppose the petrol I bought today funds the EA too seeing it's so highly taxed, as is the beer I'll drink tonight!
The significant issue is that there is no purely financial incentive or gain for the EA in all the work they do to police our rivers. Perhaps if offenders on being found guilty, were obliged to cover ALL the investigation costs as well as the simple legal prosecution costs, it might be more of a deterrent.

I fish the Hodder and Ribble up there regularly and I'm a farmer's son too. It's a beautiful beautiful place and is getting better all the time but a few folk run an absolute shitty mess next to riverbanks and they are taking the pee. They don't know what they've got/been born into and so think they can do what they want ....good to see that they've been jumped on quick.
W

Mate then they wonder why Venues especially stretches of river through Farmland go syndicate.

What do you mean exactly...that the farmer gets a closed shop of anglers who won't say owt?