The Sheffield-based legal giant has agreed a generous five-figure sum to ensure the squad can compete at the highest level at the World Championships to be held on the fish-filled River Sava in Radece, Slovakia in early August. 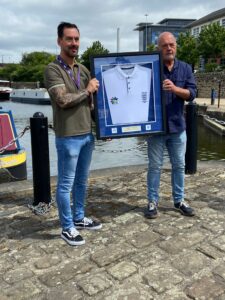 Passionate angler and SSB Group CEO, Jeremy Brooke, believes that investment in youth angling is the way forward for our sport.

“Supporting kids who can reach the top of their sport is something we can all be proud of,” said Jeremy. “It’s important to support youngsters in lots of things but fishing is particularly personal to myself as a passionate angler.

“This is my way of giving something back, of helping young fishermen achieve their dreams and hopefully, in time,

they too will give back to the next generation.

“If the guys can go out there and really put in a good performance and come away feeling they’ve done their best then we’ll all be proud of them.”

Planning for the event has been ongoing for months, and this support not only recognises the work which has already been put in by the management team, but also helps to put the squad on the bank in a strong position.

England U20 Manager Howard Kaye said: “There’s massive excitement from the entire squad. Because of Covid we’ve not been able to go for two years and we’re going over with one of the strongest teams we’ve ever had so I’m confident we can get on the podium this year.”

TRIO OF TEAMS HEAD TO SLOVENIA

The Youth World Championships will see three England teams compete in U15, U20, and U25 categories, and it’s not only the SSB Group who are backing our lads abroad…

ENGLAND U15 GET EXCLUSIVE NEW POLES

Long-term England U15 sponsors Tackle Guru have increased their support this year, including all team members recently taking delivery of Guru’s bespoke World Championships poles, each complete with an exclusive Team England 2022 livery.

Coach Matt Godfrey knows the level his young team need to be striving for, having won individual gold medals at U15, U16, and U18 levels between 2005 and 2008.

European bait giant Sensas has pledged their support for the England U25 team with a new sponsorship deal secured earlier this summer and manager Mark Downes rates their chances of medals as the highest in years.

“We have a very strong five-man squad who all fish at the highest levels with top domestic teams and they have experience in all the techniques we’ll need,” confirmed Mark. “The under 25s are on a notoriously difficult area of the river which requires very technical fishing with heavy feeding in swims ranging from 2.5m to 8m deep with the target fish being dace-like nase, bleak and, if you’re lucky, an odd barbel.”

This is a venue which has produced medals for England teams in the past as far back as 2009 when Steve Hemingray claimed individual gold in the European Champs on our first visit to the venue.