A game angler reported three times by a volunteer bailiff for fishing illegally has been ordered to pay fines and costs totalling £419 and had his fishing tackle confiscated and destroyed.

James Robert Lee, from Devon, appeared at Exeter Magistrates Court to face three charges of unlawfully attempting to take fish contrary to schedule one of the Theft Act and three offences of fishing without a rod licence on the River Exe in Devon, in June 2020.

In his capacity as club bailiff for Exeter & District Angling Association, who control the fishing rights on the river in Exeter, the volunteer found Lee fishing repeatedly without a club ticket. Using his VBS training, he reported the issue to the police and worked closely with his Angling Trust Regional Enforcement Manager Nevin Hunter, PC Martin Beck, Rural Affairs Officer for Devon, and local Environment Agency Fisheries Enforcement Officers to share information and ensure a swift response.

After Lee was observed and reported illegally fishing for a third time, the volunteer bailiff was able to support the attending officer, PC Amelia Hawkins of Devon and Cornwall Police, who found the offender to be fishing without permission and without a valid licence. PC Hawkins seized the fishing tackle Lee was using and he was reported for the offences and subsequently summonsed to attend court.

Lee was fined a total of £300 for the offences and ordered to pay a victim surcharge of £34 and costs of £85 to the Crown Prosecution Service. The magistrate also ordered Lee’s fishing equipment, which was confiscated by police, be forfeited under the Salmon and Freshwater Fisheries Act 1975 and destroyed by Devon & Cornwall Constabulary.

Nevin Hunter, Angling Trust Regional Enforcement Manager for the South West, said: “The conviction highlights the importance of teamwork, sharing intelligence and the value of the partnership between the Angling Trust Voluntary Bailiff Service, the police and Environment Agency.

“Hopefully, the fines and loss of his rods and reels will ensure that if Mr Lee goes fishing in the future he does so legally, respecting the need to have a valid Environment Agency fishing licence and to make sure he has the relevant day ticket or permit on club waters.

“I commend the actions of our volunteer bailiff and his club bailiff colleagues for reporting the actions of Mr Lee and of the police in dealing with this case. The police and VBS liaising with the local Environment Agency Fishery Enforcement Officers have achieved an excellent outcome. This should massively reassure local anglers and angling clubs that those breaking the law will be pursued and prosecuted and that the Angling Trust Voluntary Bailiff Service play a vital role in supporting angling across the country.”

PC Martin Beck said: “This result sends a clear message that working together we will help address criminality of concern to our local community and the Exeter & District Angling Association are an integral part of this in the Exeter area. We have built a strong relationship with the Angling Trust VBS and the Environment Agency and working together have shown what can be achieved.”

You need a valid Environment Agency fishing licence if you are aged 13 or over and fish for salmon, trout, freshwater fish, smelt or eel in England (except the River Tweed), Wales, and the Border Esk and its tributaries in Scotland. Licences cost £30 for up to 2 rods to fish for coarse & trout, £82 for salmon & sea trout. Concessions, short term and three rod coarse licences are available. A licence for 13 to 16 year-olds is free but you still need to register. Click here to buy online. 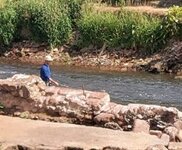 Seriously ? Idiot. Deserves all he gets.

Well done for the conviction, but why only on the third occasion it was reported ?

Serves him right. Pity his tackle was destroyed though, better if it were given to a deserving youngster or sold with the proceeds going to a local charity.