End of another river season. How was yours?

chefster said:
Zerkalo , I would say you have had an amazing season all-round, both river and Stillwater, you’ve had some amazing catches

plenty of real quality fish !! One thing I’ll say , is all them questions you ask , you really must process all the information well, and put it all in to practice

Cheers mate I appreciate the support. It's only my second season fishing rivers recently so all the help means a lot, I even get people PMing me with advice and it's all been really helpful. I will fish it better this year thanks to the advice but I just need the fish to be there as it was solid with them at the time.

probably the worst river season for me in half a lifetime

lockdowns and shielding meant very few visits, a fingers on one hand total, being it is a minimum of 16 miles from home

the canal has been my saviour, more days out on there but still less than normal

Not good at all. Probably my worst.

Certainly not anywhere near my best season on the rivers but as I’d taken another three year break it was just good to get back out fishing again. I’ve had a few good days trotting maggots on the Dearne, one in particular I had over 100 fish, roach, chub, perch, rudd and a minnow. I’ve tried for barbel a few times but only ended up with a single chub each time. Plus two sessions on the Don, one last week which is in the other thread, and one short roving session on the upper Don for Grayling where I blanked. I could only get casters for that, which I suspect didn’t help!

I have learnt from those sessions though, I’m more competent in a variety of methods and skills. I’m still excited about fishing, so I’d have to say it’s been a good season from that respect. But the next one will be much better!

I managed to get back for the whole of September last year and as usual spent most of it on the Calder. I had some decent results, framing a few times, but what was noticeable was just how peggy it was this season, with some areas being almost devoid of fish. The river also seemed to go into winter mode a few weeks early as well, with the roach doing a disappearing act.

I had a trip down memory lane with an afternoon session on the bottom end of the Barnsley stretch of the Trent at Fiskerton, somewhere I hadn't been for probably 30 years. How things change, I was the only one not fishing two rods and who packed up at dusk ! I had some skimmers on the groundbait feeder and then 3 hours on the wag and maggot for 20lb++ of quality roach, lovely stuff, my kind of fishing

With no trips down to London over the course of the season, never got on the usual Thames or Colne so my river season was limited to our annual week on the Severn in September. Barbel fishing was well below par, I had fourteen over the six days fishing which made me top scorer of the five of us, would usually have been last with that. Biggest went 9-10.
Had some stonking roach though, including my first English two pounder at 2-2 (first pic) 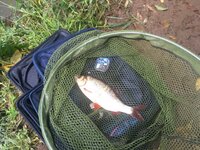 squimp said:
That is good news. I used to fish Tadpole in the 80’s and the stock dwindled away - maybe they are coming back.
Click to expand...

From what I've read online and chatting on the bank, there have been a few barbel stocking exercises in recent years which is a good thing.

But on the down side, I was told that as a reaction to the 2007 floods, a number of weirs were dredged, which took up the gravel beds used for spawning. it probably all goes in cycles, it did feel like there were a lot of roach in the Thames this and last season.
S

adriang said:
From what I've read online and chatting on the bank, there have been a few barbel stocking exercises in recent years which is a good thing.

But on the down side, I was told that as a reaction to the 2007 floods, a number of weirs were dredged, which took up the gravel beds used for spawning. it probably all goes in cycles, it did feel like there were a lot of roach in the Thames this and last season.
Click to expand...

The EA surveyed the upper river a while back (a guy called Dominic Martin) and the barbel population was really low - much less than when I used to travel to fish it in the 80’s. In those days we used to catch fish on day trips To tadpole.

In the 90’s there were big fish right up at Cricklade, Hannington etc.

I think there has been some limited stocking but as I’m not on the RFERAC anymore I don’t really know what is going on. I might make some enquiries.

In terms of roach there are loads right thru’ the river in my experience. Whether I can track down a big one is another matter - there might just be too many small ones getting in the way !
N

There was a barbel stocking from Calverton about 5 or 6 years ago at Medley. I had 3 in one match there.

My own river season was “curtailed” ... basically finished at the end of October ... although the river levels have hardly been conducive since!

early season I was winning sections and finishing last in the frame regularly. Then through September and October I had a good run of form including 4 wins. so overall, pretty good!

Not much to say about my river season, so I won't.

I'm yet to have a double figure Barbel but I had a modest PB of 8lb 4oz on the same day as a PB Roach of 1lb 14oz. That was a good sunny day on a low and clear river comprised of just the two fish.

squimp said:
I’d love to catch 10 barbel from the Thames next season - but it won’t happen. It might be possible if I moved/fished in the west London area.

I have a few more stretches to explore; so an optimist might hope they would stumble over the mother lode - but somehow I doubt it.......

Maybe I should rope Chefster in to help me find them - he obviously has the knack.
Click to expand...

When I fished upper Thames regularly in 80s there were quite a few barbel and in some matches people would target them a couple of swims that come to mind are one at Dorchester and one at Northmoor, I came third in a match at Tadpole bridge with 3 barbel back then.

My river fishing has been pretty average this year and covid has put additional pressure on my club waters which hasn't helped also I haven't been able to fish river since we went into tier 4 then lockdown as I consider it to far away.

squimp said:
In terms of roach there are loads right thru’ the river in my experience. Whether I can track down a big one is another matter - there might just be too many small ones getting in the way !
Click to expand...

Interesting angle that on whether there aren’t many big ones or if the sheer numbers of smaller ones beat them to the bait. No idea myself. I started regularly fishing the Thames 10 years ago and it’s fished really well for numbers of 1oz to 1lb roach in 6 of those years with only 1 of the other 4 a bad year for them. But in all that time I’ve had very few pound plus fish or even heard of any great numbers of them from anyone else let alone many big ones. Donnington seems to produce more big ones than anywhere else locally with the very occasional one at sandford and medley but don’t think there’s enough to target at any of them. Have had people say to me that you can often see a few big uns off the bridge between medley and the channel though, it’s like they know they can’t be caught there in the marina!

The values of keeping a diary/scrapbook came to the fore this season, thinking it had been rubbish and I hadn't got out much, a quick look at the photos through the season made me realize that wasn't true at all. Sure there was restrictions and compromises but I had some great days out and caught some lovely fish, started a blog, met some great people and saw some amazing wildlife. Whilst I would hope for more next season I ain't taking any of this past season for granted as it was what it was and was fun in places.
C

Zerkalo said:
I'm yet to have a double figure Barbel but I had a modest PB of 8lb 4oz on the same day as a PB Roach of 1lb 14oz. That was a good sunny day on a low and clear river comprised of just the two fish.
Click to expand...

I've only had one, another at 9lb 14oz,quite a few 5lb to 8lb,a few Chub in the 5lb range, just need those big roach to feed,will have another bash at the nice Hampton Loade peg but I'm hoping Arley will throw something up.

Barbel wise just a few sessions between June and when the tier system came in October and put a stop to it. Good sessions though, but hardly a season, far from it. Expensive rod license and N&D ticket that was last season on a cost to session ratio.

Sounds like a lot of people got stitched up on the travel front this season. Guess I’m very lucky that the Thames is both in my home county and only 15-20 miles away depending on which bit so was never a problem getting to it throughout last year. Only became out of bounds this lockdown when it hasn’t really mattered anyway given it’s been mostly flooded since Christmas.

Due to other commitments but mainly the Welsh lockdown travel restrictions I managed a grand total of 1 session on the Wye and 2 on the Monnow. I had about 12lb of Dace, Chublets and roach on the Wye, 1 session on the Monnow produced a 4 Chub to around 4.5 pounds and a few nice dace and the other session on a flooded Monnow produced 1 brown trout of about a pound. Hopefully next season will allow me more time on running water

What are you most looking forward to when the river season opens?
2

The oddities of hemp
2 3