Well arriving on the Friday at about Noon,it was soon obvious that this was in danger of turning into a 3 day event,as numerous attendees had managed to find an extra day from somewhere.[]
Ray & Scouse had made it despite the suspension on Rays car going AWOL on the trip down.(Must have been the weight of kit[])

After a couple of years of pounding the keyboard it was great to finally catch up with Norm,TeePee,Haydn,Mookie and others which up to that point had only been names on the Forums.[]

Dave & Stu had departed to get some important provisions (The Beer []) so i decided to while away a bit of time,so out came the fishing gear,and i soon had a few small roach and skimmers,before Stan (Elvingtons Owner) had parted me from the day ticket money and informed me that Carp and Poles weren't on his approved list.[]

Dave & Stu soon returned and camp for the weekend was set up with bivvies put in place.Trogg had already set up with the flag of St,George,strangly topped with a small Lizard flag proudly flying next to his bivvy,and Sil the Rotty standing guard.

Les arrived to take up his post of chief Bar Steward,and around about 7pm a group of us set of for the local pub for a meal and a couple of pints,and very nice it was too.

With no nightfishing being allowed normally at Elvington,the only thing to do on our return was to go and support the cause in the beer tent,which with the beer being only a 1 a pint wasn't to onerous a task

,with some sausage baps being dished up as well,we dissapeared to our bivvies to await the proper start of the Fish-in in the morning.

6.30 Saturday morning and people are rising ready for breakfast and getting ready for the off at 8am.Breakfast consumed,the Fish-in gets underway as an already warm sun continued to rise in the sky.
Whether it was the hot weather or the sheer pressure of all the swims being occupied,sport was slow to say the least with just the odd fish coming out.

Thankfully Red Leader had his rods out and these were producing,Just not for Dave.[]
It would appear that someone had drunk the beer tent dry overnight,so Dave had to jump into his car and get another barrel[]Geoff & Mookie.[?]
Stu was soon of the mark with a 3lb eel on Daves rod,and later i managed to get off the mark with a nice 9lb Mirror carp again on Daves rod.[]
Just as well really as during the course of the weekend i managed to lose all 4 carp that i hooked on my own rod. [!]
Did manage a ruffe though,for 3 points in the Fishing Race.[]

Dai managed to liven up proceedings by having his rod dragged in by a rather determined Carp,Trogg showing a rather nimble turn of foot rushed to the rescue,but in trying to avoid a landing net handle,stumbled crashing down on a sleeper on the bank and ending with his head under water.Still the rod was retrived with the carp still attached,an 8lb common,but at some cost as it became obvious that Trogg had cracked a rib for his trouble.[]

Dinner time and it was fish & chips for some and back to the pub for a few of us,prior to fishing through the night (a consession from Stan for the Fish-in)

Dave & Stu on their return tackled up for an attempt on the cats,while myself,Simon R,Tiny and Geoff settled down to spectate.
Well the banter was good to say the least,and the hysteria was probably heard round the whole lake well into the night,until we retired and left them to it.

At this point I should probably apologise to Dave,as it appears that i managed to keep him awake the whole night,as evidently my snoring resembled a Diesel Generator working overtime.

Sunday morning and at breakfast a rather bleary eyed Mookie appeared,blaming Uncle Geoff for leading him astray in the beer tent the previous evening and wondering why his legs were still having trouble obeying his brain.[]

Dave actually managed to catch a fish on his own rod and Jack Thresh managed to get the biggest carp of the weekend with just a hour to go,a lovely mirror of 19lbs.

All to soon it was over and time for Troggs ceremonial beheading Shaving.[8]Amazingly this was accomplished without a drop of blood being spilt.[:0]

The raffle was drawn and the auction was held,and for those of you that weren't there i can only say that you missed a treat in the shape of Rose the Auctioneer,as Stu said "what a gal"[]

All to soon it was all over for another year,Hands were shaken, farewells said as we all disappeared in our different directions.
Thanks to everyone that made it possible,those that attended,and all the sponsors,but most of all Thanks to Dave & Stu for all their hard work in making it a Fish-in to remember.

Just sorry that yet again i could not make it []

A big well done to everybody involved for raising such a great sum for the charities.

nice read peter,makes you wish you was there,shame about the camera???

Commonsense aint that common,is it?

Actually Ken I think the first photo Peter took was a self portrait. We did try and warn him of the consequences but to no avail.[]

True friends are like good books. You don't always use
them but you know where they are when you need them.
Fishing Venues UK

Or was it the photo of a hairless Trog that did it.

Either way I think I am in trouble so I will be quiet now.[][]

True friends are like good books. You don't always use
them but you know where they are when you need them.
Fishing Venues UK
B

Nice read Peter, Sorry about the none development of photos.
Come on Dave where are those photos?

Weldone Lads What a great way of raising so much money for Cancer Reserch, Doing what what we love best Fishing, []

Great work all Weldone to all who was involved.

Patience is a virtue [] lol

AlanP and JC netting a carp []: 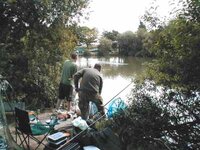 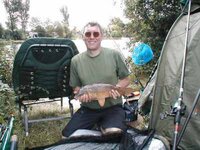 Dai and his little bit of Wales []: 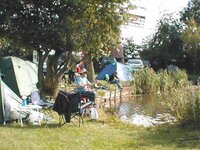 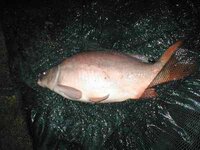 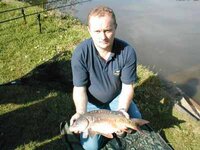 Peter with a carp caught on my tackle [8D]: 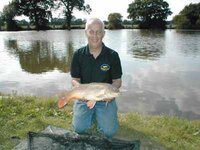 The best Peter could catch on his own tackle []: 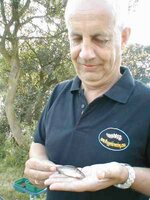 Troggy and Stu larking around with the cut throat razor [xx(]: 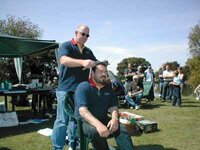 And would you put yourself in this position lol [)]: 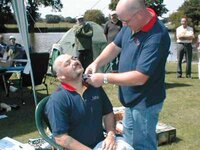 Unlike me. As most of you know I was made a tempoary moderator for the duration of the weekend. Howvever, early on Sunday morning I managed to cut my hand open while working, and was rushed to hospital in a meat wagon. My apologies to Beebs and to the other temp mods, for lumbering them with all the donkey work while I was lying in a hospital bed with several (well, one), nice nurse hovering round me tending to my every whime, (well most of them)!

I am back at home now and finding it hard to type with my left hand!