I'm not sure what's the point of this video. If it's to stop druggies being druggies or druggies getting behind the wheel of a car it won't work.

If it was a video showing Summersgill receiving a minimum of 20 years in prison with the first five years in solitary to reduce the chance of getting drugs, a lifetime driving ban and further video footage of daily beatings in prison. It might have half a chance of at least stopping someone from being so reckless.

I've just had to look it up, even causing death by drug driving only carries a maximum sentence of 14 years. This video needs to be viewed by everyone that sits in the House of Commons and House of Lords, even then I'm not confident they would do the right thing.

I just hope that the poor lad and father are not punished for the rest of their lives by this reckless, lawless, pathetic excuse of a human being.

Seeing this has cheered me up 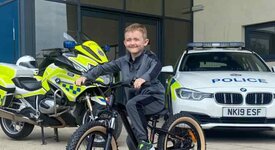 He should be given three years just for his attitude in the back of the van. Then a further 30 for what he did to the little boy.
Where I live the roads of full of these people, they are reported but they continue to cause a menace to the public.

Too many namby pamby softly softly do gooders quoting human rights this human rights that blah blah bloody blah. How about society's human rights to walk our streets in safety away from these pond sucking pondlife? A plane of 50 criminals of serious offences was due to take off from Stansted last Wednesday, the purpose was to send them back to Jamaica for their crimes over here.......the do gooders with the human rights dribble managed to stop 43 leaving and put them into our prison system that we are now paying for. 43 spaces that could be used to keep this person and his drug dealing mates banged up for life.

I only hope his time in prison is hard.

Aggravating factors in the case from what I can see.

- Under the influence of CK1 (a combination of Cocaine and Ketamine while stoned at the same time). Ketamine's a strong dissociative anaesthetic that induces 'out of body' hallucinations. Anyone stupid enough to drive on that, known as Horse Tranquilliser, deserves more than 3 years.
- Going 60 in a 30 zone. That's twice the speed limit. I'd give him 3 years for that alone.

I would have given him a lot longer sentence than 3 years for factoring those two things in.

just up the road from my house we had a banned driver over the limit on drugs/alcohol in an uninsured car doing 60mph in a 30 through red lights hitting a car head on and killing an 18 year old girl on her way to work, he got 3 years!! ruined the life of the whole family! in my eyes that is murder and 3 years is an insult to the familly
Y

Tristar said:
I only hope his time in prison is hard.
Click to expand...

The trouble is , Prison is not in the least bit hard, if it was most of the scumbags would never ever want togo back a second time.

No you degenerate scum, a simple accident is a bumper tap, or pulling out in front of someone.

Not being so off your face you can barely speak, careering across a main road and wiping out a cyclist on the other side of the road.

I truly hope you get battered in every conceivable way whilst you spend the next 18 months sharing a cell with Big Barry and his mates.

Lady by the sea

Can anyone make out this word?