Decent session with the bin lid!

So after 3 weeks since my last session, I went to go down the river Dearne. My second home. But as I walked down I saw a fair tow and a bit of debris flowing down so chalked that idea off. Decided to go back and get my carp gear out (apologies to the purists) and head to a lake where I learned to fish as young lad.
My son clocked on to the idea and decided he was coming too. Sound.
We headed to elm tree fishery in kilnhurst. There’s two lakes. There’s the horseshoe lake which is the match and pleasure lake and the specimen lake which used to be hooton hollow. We went for horseshoe and I set Jacob up on his Nash dwarf cork rod. If anyone is looking for a rod to start their young one off with, definitely consider this one. 6ft, 1lb tc and not expensive, they’re brilliant (I’m not on commission).
Sat him down, plumbed him up, opened his sweetcorn and off he went whilst I set my carp rods up. No sooner had I took my first rod out of the bag and he had his first fish of the day. 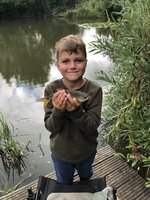 Kept it simple. Small float. Light line. Next to tree on the right. He kept catching consistently. Some lovely roach, skimmers, Rudd and bream/roach hybrids.
Eventually I got the first rod set up. Solid pva bag. Mainline cell pop up that had been soaked in the almond goo for a few weeks. No sooner had I got the second rod out of the case when the alarm rang. Shouted Jacob over whilst I brought the fish closer then handed him the rod. He did brilliant at controlling it on a 12 ft rod for his age and his face was a picture as I slid the net under it. 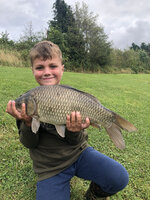 A new pb at 6lb on the nose. Absolutely chuffed for him. Tied another bag and recast. Finally got the second rod out too. Same approach but an rg pop up on this one. Once sorted, rejoined Jacob in his peg next door. He was still catching constantly and the float slid away in an almost stereotypical fashion and I guessed as soon as he hit it what it could be….. 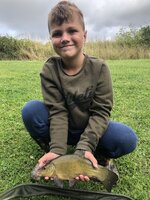 Lovely little tinca! There are some big ones in here, I had a few in my teenage years but often get outmuscled by the carp. But I love tench and should really target them more often. Released the fish then the buzzer went again. 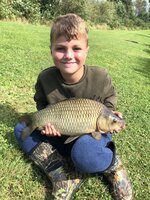 Slightly smaller than the other at 5.8lb, but nonetheless a big fish for Jacob. Again chuffed to bits. We had 8 carp on the carp rods and endless bites on Jacobs. The biggest carp was just under 9lb which happened when the missus came to pick Jacob up when it was his teatime. After a point I got a bit bored of waiting for the alarms so I picked Jacobs rod up and relived my youth for an hour. Had a few skimmers and roach then called it a day. But overall, a genuinely enjoyable session. Jacobs already asking to go back, and we will!

Sorry for the waffle

Brilliant mate. Looks like you both had a fantastic day, some lovely looking carp and a cracking little tench there. I’ve only ever fished there twice and mostly caught F1s on the method. Nice to see some proper carp coming out.

A brilliant day and excellent report, nice one

Thanks all! Great to hear all your positive feedback! He’s got the bug like we all have now

Shame there wasn't fishing like that when I was growing up in Kilnhurst,the Don only supported rats,Bakers pond would probably have stripped your flesh if you'd fallen in,it was the canal at Swinton or nothing,mind you it was educational watching the great Freddy Foster swingtipping it.

160642fishing said:
Shame there wasn't fishing like that when I was growing up in Kilnhurst,the Don only supported rats,Bakers pond would probably have stripped your flesh if you'd fallen in,it was the canal at Swinton or nothing,mind you it was educational watching the great Freddy Foster swingtipping it.
Click to expand...

Top side of that,we weren't allowed to fish the basin in front of the Ship Inn (where I had many a pint or two after working Saturday mornings at Wards)

160642fishing said:
Top side of that,we weren't allowed to fish the basin in front of the Ship Inn (where I had many a pint or two after working Saturday mornings at Wards)
Click to expand...

It’s full of little stocky carp now. It’s been cleaned up a lot and fishes pretty well from what I’ve heard.
M

What about South Yorkshires jewel in the crown,.....Pottery Pond.

Millers Thumb said:
What about South Yorkshires jewel in the crown,.....Pottery Pond.
Click to expand...

That’s swinton too I believe?

Millers Thumb said:
What about South Yorkshires jewel in the crown,.....Pottery Pond.
Click to expand...

I don't think we were allowed to fish that,it was in the mid to late 50's.
M

Swinton council did day tickets in late 60s-70s, walk past with my dog not seen anybody fishing for years.
T

Millers Thumb said:
Swinton council did day tickets in late 60s-70s, walk past with my dog not seen anybody fishing for years.
Click to expand...

I WISH. no it isnt mate.

I’ve never heard of Pottery Pond, admittedly I’ve only lived up here for 12 years though. Where about is it?

If you’re coming from mexborough, where woodman roundabout in swinton is, instead of turning down Warren vale head straight over instead and there’s a small car park on your right. It’s behind there.

Club that has got it right - Festival Angling, Ebbw Vale

Enjoyable session with my son.