So today I had the last session of my furlough period which has produced something in the region of 35 sessions since we were allowed to fish again in mid May. Conditions were for the first time in a good few days both warm and dry with good cloud cover and little wind so my initial thought was to have a roach trotting session at sandford. It then occurred to me that it being a weekend and the first good fishing conditions in over a week the chance of getting a decent swim there was slim so I went with a safe bet for what could be my last session for a while of a feeder session at medley.

The session started a little before 8 and finished a little after 1 (as by then boats and swimmers were in full force) and whilst it was a little tougher than I expected given the conditions (suppose they were a dramatic change from the previous few days) I did manage a respectable bag with a few decent fish amongst it. In total I had 10 mostly decent perch with one bigger one, 10 decent skimmers with one almost a proper bream, 7 small chublet, 6 decent dace, 3 respectable roach, 5 bleak and 1 gudgeon for maybe 10lb given that the bigger perch and the almost proper bream probably made a third of that between them. Surprisingly after the near constant pike attacks of the last couple sessions I only had one today of about 3lb that bit me off just before the net.

All fish were caught on the 11ft drennan acolyte ultra feeder rod paired with the drennan 7 series 4000 feeder reel loaded with 6lb maxima with a 15g drennan bomb feeder above a bead and swivel to a size 14 to 4lb maver match hook to nylon. Hook bait was triple red maggot and the feeder contained a pretty even mix of frenzied caster meal and silver groundbaits, hemp, casters and the odd maggot.

My grandad was with me again and had about half the bag I had but was cycling through different baits to try find the big bream so could have had more if he’d wished.

All in all it was a pretty respectable session and had I fished on for an hour or so longer like I usually do it probably would have been a comfortable double figure bag so can’t complain. The joys of being able to fish pretty much whenever the weather allows as has been the case over the last 3 months is now over so it’ll be back to playing weather bingo at the weekends again now so hopefully I’ll be able to get out next weekend!

Pics of the swim at the beginning and end of the session, a slightly better than stamp perch, the bigger perch and the big skimmer/almost proper bream for you. 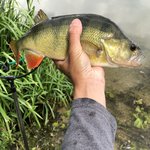