I’m not a massive fan of particularly deep water as for coarse fishing it means it’s hard work to float fish and I prefer that over feeder. Then for sea fishing it can mean a hell of a lot of winding up and letting down which is hard work after a while

I've not fell in since i was a kid luckily, and back then it was the Erewash and i wasn't fishing at the time, just pratting about and slipped down a muddy bank.

These are some of the staged areas at Patshull (someones nice photograph I found) it's a beautiful place, and the staging probably isn't dangerous at all, probably quite shallow around them, but I still wouldn't want to slip on them as you've got around a 3' drop. 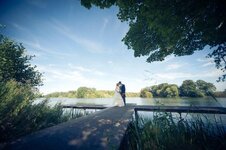 I fished off the rear car ramp on the MV Norland in the Ascension lsland 1982, now that was deep shark infezted water.

Rogers island on the shannon. You have 6_8 meters of water under your feet and you are sat on an undercut banking.

Always have a rope and a couple of stainless steel banksticks for fishing the middle Severn. Even in dry safer conditions it makes it a lot easier to get up and down the bank.
The Wharfe has had a couple of mentions- only fished it once, in a Winter League at Ulleskelf back when I was 17 and remember the banks being absolutely lethal. Steep slopes of mostly bare mud, ended up knocking two banksticks a long way in just in front of me to wedge my feet against, only way I could avoid sliding. Top of bank was too high to fish sensibly from.

Always wear a life jacket for the rock marks up here and even then there's a couple of places I wouldn't fish on my own
Life jacket no help on some of the access though- heres's the start of the path down to the headland at Rubha Hunish-where it leaves shot it basically cuts diagonally across a virtually sheer cliff for a while and then down a very steep area of often loose stones and rocks . For scale, the highest point on the headland below (very top centre of picture) is about 130 ft above sea level. Easy enough with both hands free but interesting when carrying anything.
Had my only double figure pollack from the far end of the headland, 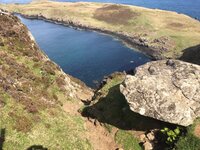 Several have mentioned the Wharfe, but the most dangerous part is the Strid at Bolton Abbey where fly fishers fish above and below but not through it. It is also named as the stream that swallows people. It is not known how deep it is, but it is said that if you fall in you don't get out dead or alive. 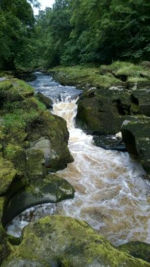 The most dangerous river I fish is the Ericht in Scotland. Its not deep but slip on the rocks and the current sweeps anglers into the deep pools where drowning is highly probable if not wearing buoyancy aids. 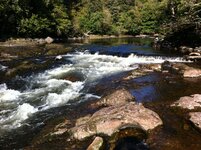 The dodgiest I ever fished was The River Aire this side of Knottingley. The peg was down a high steep bank with a dug out about 3 foot square, and the depth was 14 foot or more under your feet. It was a bit ironic really, as I only fished it twice and drew the same peg both times, mind you I won them both with decent bags of lovely roach, using a Tricast 17' rod. Strangely I remember the pegs in the lower numbers wasn't anywhere near as deep, but didn't fish as good as it looked. tipitinmick will probably know the stretch I'm on about.
C

I don't bother with such dangerous places. I go fishing to enjoy myself not to risk my neck. I have partaken in enough dangerous jobs and activities over the years, I certainly don't need another one adding to the list.

I'm a very confident wader but even the whole stretch down to the ruins makes me nervous and even some places down there can be fatal. At the lower end of the Cavendish restaurant car park I wade out to my waist and the limestone shelves vertically drop off and you cannot see the bottom and with the current pushing against your legs it gives you a bit of an adrenalin rush. It's not for the faint hearted but all the big fish hold up in that area.

The trees at Porth could be quite dangerous especially in the winter when the steps and the platforms were slippery and its 5m deep straight off the platform. Some of the pegs on the Bristol Avon you need mountaineering equipment to be able to fish.

There can be extremely dangerous pegs at a venue that I really like, Viaduct isn’t very deep but the platforms are extremely slippery especially in the autumn and winter. You have to be really careful placing your box on the platform.

I took the lad out late autumn last year to the Derwent at Stamford Bridge. Heavens opened on the hike across the field to the river: “Never mind, it’ll be fine” I said hopefully. Walked past the lovely solid Hull amalgamation pegs and on the York section. 12’ muddy banks to a 2’ square muddy puddle and a lot of water running. Hmm, not gonna get down there! Ended up fishing from the top level- utter disaster and soaked to the skin. Just managed to wheedle out a Chub, but landing net handle only just long enough with me leaning over the bank. Harder still putting it back in

Afterwards I reflected that it was pretty stupid to have fished at all. Still, could’ve been a lot worse.

Aside from deep water, dodgy banks and predators another potentially dangerous spot I’ve fished I could feel current from power lines down my rod! Was a fair way away but the air was very damp which I reckon was carrying the current further than usual. Won’t be fishing that peg again. Also fishing around lively cows on my own makes me twitchy as well.

Silverfisher said:
Aside from deep water, dodgy banks and predators another potentially dangerous spot I’ve fished I could feel current from power lines down my rod! Was a fair way away but the air was very damp which I reckon was carrying the current further than usual. Won’t be fishing that peg again. Also fishing around lively cows on my own makes me twitchy as well.
Click to expand...

A couple of our ponds are in fields that hold cows. My mate is terrified of them & will go and fish a different pond if the cows are out.

The Landlord said:
A couple of our ponds are in fields that hold cows. My mate is terrified of them & will go and fish a different pond if the cows are out.
Click to expand...

I’m fine with them if there are plenty other people about. I just don’t like them when I’m on my own as they can sneak up on you and those that aren’t used to lots of people tend to be more twitchy.

This is the 'Roach Pit', We used to fish this as kids most nights during the summer and it used to house some cracking carp and of course, The Roach fishing was incredible hence the name. It was located across the road from me but has now since been filled in and made into a car park for reasons I'm about to state. Located behind the 'Roach Pit' was a football field, blocked off by a tall fence, however on occasion people would manage to clear the fence and lose footballs in the pond, several at a time some days. Thats where we, a group of 10 year old kids would come in. We'd smash down the reeds on the backside to form a thick brush bridge to retrieve the footballs to add to our collections. We'd make secret, narrow pathways so we couldn't be spotted and people wouldn't grass us up to our parents.

One thing we never did though, Was go at it alone or actually enter the water. This particular pond was known to be incredibly deep water, Upwards of 20ft deep (In areas), if I can recall, And each summer it'd be bogged with thick, greenish black weed, And the water would go an incredibly dark, greenish brown. (see pic).

One year, a close childhood friend of mine was walking along the footpath on the front side and saw a brand new, new release football (It was like that years Champions League One or something). on the opposite bank. I have no idea what possessed him to do it but he decided he'd swim across from the picture side, all the way to the far bank to retrieve it, And that was the last mistake he ever make. The guy who he was with, In his 20's tried getting in to help him but got a few ft out before he also found himself being wrapped and tangled in the same weed.

From what I recall it took hours to find and retrieve his body.

Zerkalo said:
What are the most precarious and potentially dangerous places you have fished?

There's a few really deep parts of the Middle Severn near me that I won't fish, a) because I don't think the fishing is generally as good as the shallower stretches and b) because the banks seem dangerous in places.

Here's on of the safer looking pegs at Ribbesford but you've probably got 12' of water off the platform from looking at the flow.

Also at Patshull Park. There are a few stagings around the lake that are probably 4 foot off the water. Apparently they can be good pegs, especially the new ones they've opened near the hotel, but I wouldn't want to fall off them, not so much because I think the water is that deep off the staging, it probably is, but because you'd never pull yourself back onto the platform if you fell in.
Click to expand...

Alot of the banks of the River Rother are literally 45 degree angle. "Miles of the River Rother" they say in the club's blurb, what they don't tell you is that most of it is unfishable! No chance I'm chancing that so have to pick your spots a bit carefully.
C

Some of the stands on Irish loughs are death traps; not necessarily because they are rickety, but some of them stretch so far out into the lake that you can see 12 - 15 feet of water under your feet. I only started to notice it a few years ago when the waters (supposedly because of zebra mussels) became gin clear. Before that, the water was so coloured that what the eye didn't see the heart didn't grieve over. And when they're wet and slippery - forget it.

M
Casting And Feeding To A Clip In Deep Water
2