"I've seen things..." to quote Roy Batty, except today it was only drizzling so we were quite lucky, and we didn't see that many Crucians.

What we did see was a fishery called Hurst Farm in Bridgnorth, only the second time I've fished it, but a lovely place, if a bit out of the way. I've mentioned before, last time I fished it I chucked out a feeder just out of curiosity to see how deep it was and it seemed bottomless. Apparently the lakes were created from a brook that fed an old Iron Furnace. But today we fished a shallower bay of the lake, which was also ideally next to the car park.

They have put 'pegs' in since I've last been when it was fishing straight from the grass bank, and they've done a good job of it too. 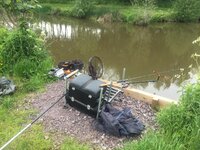 I had a marginal shelf close in, where it dropped down to about 3' and quickly sloped off. Due to the gradient I decided against fishing any kind of lift method and set up a small crystal insert waggler just over-depth to twitch along the slope. Starting on maggot and being very cautious with the loosefeed, I had 20 fish on my clicker before my dad had managed to tackle up and get a maggot on the hook. Mostly Perch and a few Roach. I reckon if I'd carried on doing that I could have done 300 of them but that wasn't what I came for so I switched to Corn on the hook, feeding a few grains and also a few 4mm pellets.

Meanwhile, dad had got himself started and first chuck on single red maggot he hooked a big Carp. He played it for a few minutes before the hook pulled.

Next chuck he had a slightly Carpy looking Crucian of over 1lb. He was chuffed with that and I didn't really want to let on to much about the potential hybridisation (I don't think any specifically bred 'F1s' have been stocked) but still a very nice fish for him to start with as it looked mostly Crucian and a decent size. 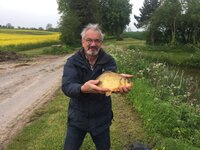 He then started to catch Roach an Perch while I was fishing Corn. I had a couple of nice little Crucians around the 12-14oz stamp. 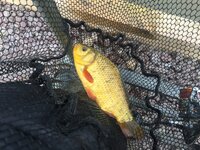 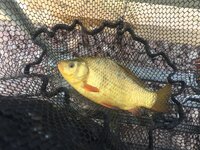 Bites slowed up a bit on Corn with only the odd Roach alongside the Crucians. 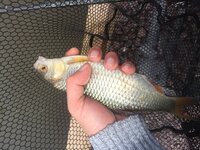 Soon after, dad had a Koi which he was chuffed with. 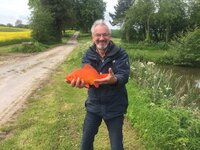 And I had another Crucian still on Corn. 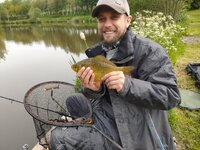 Before I hooked a Koi that for a second we thought was the same fish my dad just had, different fish in the end though, mine was bigger. 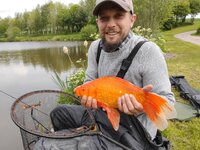 As bites dried up on Corn I decided to go back on maggots but this time would feed it more aggressively. It didn't take long before I landed this 13lb4oz Mirror on double red maggot. 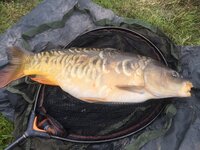 I then had a 2lb Perch almost next chuck, which my dad tried to photograph but ended up taking a video by accident. I felt like by feeding maggots more aggressively it was bringing in more Roach instead of Perch from then on, but no more Crucians showed. I didn't mind as the Roach were a good stamp going almost to 1lb. 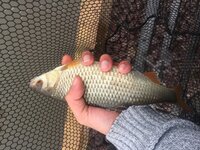 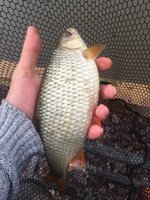 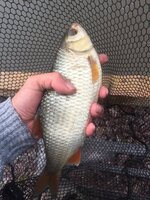 I was fishing quite heavy, 0.14 bottom to a size 16 B911. Would I have had more Crucians if I fished 0.12 to an 18? Maybe. The water there is quite coloured and it doesn't seem like a highly pressured water so that was my reasoning, as well as being able to land the double figure Carp. My dad hooked another Carp and lost it to a broken hooklength, but overall had a good day with a few Crucians. the Koi, and a lot Roach and Perch.

I finished with 68 fish in total. 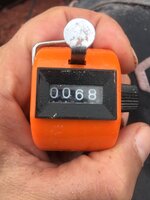 I would not want to estimate my total weight but the Roach there are a decent stamp as you can see, none below around half pound. The Perch were a bit smaller other than the 2lb fish. At least I had a few of my target species. First time I went I fished mostly maggot and was able to fish through the Roach to catch the Crucians but this didn't really happen this time with all of my Crucians coming on Corn. Could have had a lot more fish in total if I'd stayed on maggot but might not have caught the Crucians.

All in all a very enjoyable day with my dad. Better than I expected when I woke up this morning given my recent form. Stillwater fishing rarely excites me as much as river fishing and I'd love to be able to catch Roach that regularly and that stamp from a river, but this was more than welcome in the meantime.

Can't beat a good day out with your dad. I think those Koi are goldfish though dude

Robwooly said:
Can't beat a good day out with your dad. I think those Koi are goldfish though dude
Click to expand...

Ah right, that's what we were calling them colloquially on the day lol, never realised they were actual goldfish, I'm useless when it comes to orange type fish identification.

Sounds and looks like a good session to me, some nice roach and crucians there and who doesn’t love a goldfish!

Nice write up and photos Zerk, but why am I not surprised at you even having to catch orange fish

@Zerkalo .....Looks like you had a lovely day.... Some smashing photos too. Well angled the pair of you.....Did you manage to find the right access to the venue ok?


Total said:
@Zerkalo .....Looks like you had a lovely day.... Some smashing photos too. Well angled the pair of you.....Did you manage to find the right access to the venue ok?
Click to expand...

Yeah. I say it's out of the way in my report, comes across as a bit negative, but it's also a positive depending on which way you like it. It's just down about 3 miles of single track lane with few passing bays. Not much of a problem as it's quiet as not much else down there, just that reversing is a bit of a phobia of mine. The directions on the website are spot on, just turn down the lane in Morville.

I bet your dad put your hat on for you though


Yeah. I say it's out of the way in my report, comes across as a bit negative, but it's also a positive depending on which way you like it. It's just down about 3 miles of single track lane with few passing bays. Not much of a problem as it's quiet as not much else down there, just that reversing is a bit of a phobia of mine. The directions on the website are spot on, just turn down the lane in Morville.
Click to expand...

Am not going to Bridgnorth this year but have passed on details to those that are going from my mob to have a look at Hurst Farm should the Severn be out of salts.....

Enjoyable session with my son.

B
Intruder in the swim.