The call from angling and environmental groups for the Government to take meaningful action to end the scandal of increasing amounts of untreated sewage polluting our rivers and streams was taken to the Conservative’s Manchester Conference this week by Angling Trust Policy Chief Martin Salter who shared a platform at the Rural Reception with Environment Secretary George Eustice.

Last week the Angling Trust and Salmon & Trout Conservation published their Time to Fix the Broken Water Sector report calling on the Government to issue clear and unambiguous instructions to the water regulator OFWAT in the forthcoming Strategic Policy Statement (SPS) to compel and enable water companies to repair sewerage systems and invest in adequate resources for water supply.

In his speech to Ministers, MPs and delegates Martin Salter said:

“We desperately need Defra and OFWAT approve a wholesale overhaul of the ageing sewerage network to end the scandal of untreated effluent ending up in our rivers. After years of welcome improvements, the condition of our rivers is getting worse not better with 400,000 instances of sewage discharges last year and a waste water infrastructure that is no longer fit for purpose.

“A quarter of a million extra houses promised every year and no clear plans as to where the water is coming from or where or how the sewage will be treated. 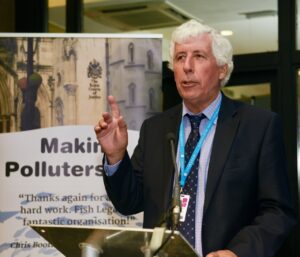 “Shockingly, our report reveals that OFWAT operates on the assumption of a 2,000 year lifespan for the sewerage network – 10 times more than the European average. Little wonder then that burst pipes and the overwhelming of sewage treatment works is now almost a daily occurrence.”

The Rural Reception is an annual event at all three main party conferences organised by the British Association for Shooting and Conservation (BASC) and the Angling Trust. It aims to highlight current issues of concern to both sports.

“The freshwater environment is in crisis, with much of the harm being driven by over-abstraction for water supplies and sewage pollution caused by water companies. Now is the time for OFWAT to take environmental issues seriously and not be constrained by attempts to cap water bills for short term political gain. Without a step change in public policy – leading to significantly increased levels of investment in water infrastructure – the situation will only worsen with dire economic and environmental consequences.”

The ‘Broken Water’ report includes a ‘shadow’ SPS which, if adopted by the Government, would set out strategic priorities for OFWAT that demand environmental improvement, and a significant increase in capital investment in the failing waste water infrastructure that threatens to irreversibly damage the biodiversity of freshwater ecosystems in this country.

It can be found in full here


2. The Government’s draft SPS closes for consultation on October 15th and provides a unique opportunity to refocus OFWAT’s priorities so that it can facilitate rather than impede public policy objectives including the Government’s own 25 Year Environment Plan.

3. The Rivers Trust report on the State of our Rivers can be found here.