Complications in a fishing Match .....your thoughts ?

CluelessFishing said:
Yes but he was insistent that his position was correct and since I am guilty of being a bit short on temper at the best of times I carefully avoided getting into an argument about it ................ in any case it was resolved I didnt win the zone of 20 to qualify which would have made it a bigger issue and phil Briscoe gave me the £50 section of 10 money I should have had on the day last week so all came out in the wash
Click to expand...

Good outcome, maybe he will read the rules next time.

Way back in the mists of time (the 1980s) the practice of re-hooking was a perfectly legal tactic on the River Swale matches ran by Thirsk AC - and another club whose name escapes me. For those not aware of this particular technique it involved attaching a previously caught fish to proper pike tackle, wire trace and all, and lobbing it in - the use of spinners, any other lures or deadbaits you'd brought with you wasn't allowed though. I do remember one chancer who got caught with a herring on the end of his pike rod - he swore blind that he'd caught it earlier - apparently herrings are migratory and the only reason it was dead was because it was knackered due to it's long swim from the sea

The biggest problem was usually catching a suitable sized livebait In practice pike would rarely win the match since if the river was in decent nick somebody would get 20 or 30lb of chub and if it was in flood the pike generally wouldn't be feeding anyway.

More recently (late 90s) the old North Durham Winter League allowed pike to count providing they were caught on 'normal' tackle - some stretches of the Yorkshire Ouse were infested with the bloody things - especially around Linton Lock and Beningbrough. The usual tactic was to impale 3 or 4 lobbies on a size 6 hook and tow it around the area that the pike was thought to be lurking. I only had necessity to try it once - I'd already lost a pound of hard won fish to the bloody thing and I'd resorted to waterskiing the fish in, quick enough so the pike couldn't grab 'em. After one abortive attempt I could see the pike just sitting in mid-water adjacent to a bush - not a huge fish -maybe 6lbs - I already had my pike tackle rigged up - a heavy tip rod, 8lb line direct to a size 6 hook with a couple of SSG nipped on the line for casting weight. I impaled a bunch of lobbies and swung the bait out almost on the nose of the pike which completely ignored it - towed it back and forth a couple of times and provoked no interest. I figured it perhaps wasn't hungry anymore until it struck at the next roach I hooked.
The match was won individually with 2 pike for twenty odd pound, a single fish of 8lb odd was second.

In the club matches that I run I tend to stick to the adage 'If it's got fins it counts" -which saves arguments - although the use of traditional pike tactics is only allowed for our annual pike match.
There's only a couple of the waters we fish that actually contain pike anyway and one was actually caught on single maggot last year - it was less than a pound so had little or no impact on the final result.

Pike on the pole in a match at Smeatons Lakes Newark. OK, just a jack but it was weighed seperate by the bailiff and put back as per their match rules. 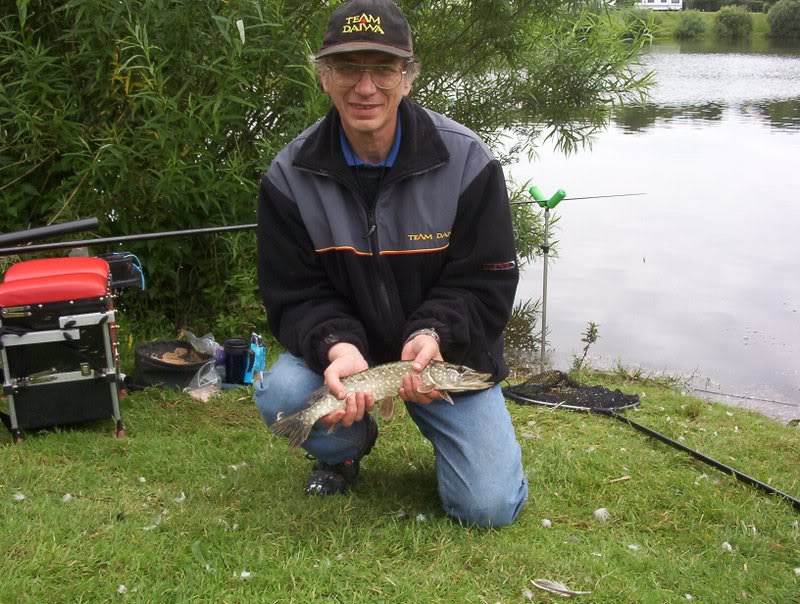 The confusion arises because it’s widely accepted that pike don’t count. I used to fish matches from North London to the Lincolnshire fens and I know of nowhere that they did.
If they did count I would expect to be made aware of it at the draw and this is what should have been done in this situation. Because I would assume, like the vast majority of match anglers, that Pike don’t count.
It‘s not a rule, but they don’t count in any team matches or leagues that I know of, national championships and the vast majority of open matches.
I think the onus is on the owner/organiser to make people aware that pike do count. Not the other way round. Anyway, we’ve been through all this before and it’s been sorted

smiffy said:
The confusion arises because it’s widely accepted that pike don’t count. I used to fish matches from North London to the Lincolnshire fens and I know of nowhere that they did.
Click to expand...

But north of the fens - certainly in Yorkshire and beyond - they very often DID count - and that included the Angling Times winter league.
One thing I don't understand is why pike shouldn't count?
What about zander - not a consideration up here but I'd imagine odd ones get caught from time to time further south - can they be weighed in or is there a list somewhere detailing fish deemed to be 'acceptable' or otherwise?

It cant be that widely accepted umpteen on here have said otherwise ......... its contentious thats the bottom line so what I do agree with it should be stated in the match rules of whatever match is being run at the time ....which are quite different to the fishery rules . Fishery rules have to be observed irrespective of match or who is running it . Match rules can vary significantly from match to match as long as the fishery rules are observed. If you want to hire a venue like boddington and have a match where only gudgeon count you are perfectly entitled to do so since the fishery rules dont say otherwise
S

We’re just going round and round in circles. As for Pike counting? I see the word “did” or “used to” used quite a bit. And that’s true. They did, they used to allow Pike but for many years now they haven’t and it has, in fact, become a rule that Pike don’t count for the vast majority of matches.
As for why Pike don’t count? It’s because there’s no guarantee that the Pike itself was caught legitimately. It could well have just kept hold of the fish you have legitimately hooked. In which case you fall foul of the longstanding live bait rule. The easiest thing to do is ban them. Stops any arguments.
Im sure many would ban foul hooked fish if it was possible to police. But it’s not so the only thing to do is allow them.