Just watching...20 mins in, Chelsea plenty of the ball but no end product.
Utd look like they are taking it as a practice match.

United won. No doubt we will here about this for weeks and weeks.
N

United won. No doubt we will here about this for weeks and weeks.
Click to expand...

So if Chelsea had won we'd have heard nothing about it at all? Sour Grapes mate.
Last edited: Aug 5, 2007
H

Cant read owt into todays match regarding future league positions, except that chelsea are so predictable.
Diamond passes going absolutely nowhere and tentative going forward.
I think Mourinho has lost the plot and this could well be his last at the bridge if he does'nt win the champions league.
As for utd, they are mavericks cos you dont know what they are likely to do next and they look wonderful going forward.

I think Man Utd were the better team because some of their attacks were just amazing and some where new stuff. Whereas Chelsea, they do have a good attack which worked for their goal, but its the same stuff they did last season.

To win a cup or a title, you have to try new things and do different things as well.

Unlucky Chelsea, but YYYESSS! Get in United!!!

The other big game for me today was Lincoln City v Watford, Watford won 2-1 which they deserved after their first half performance, but Lincoln had a goal disallowed, hit the woodwork 3 times and had a shot cleared off the line all in the 2nd half as well as an acrobatic wonder goal by Oliver Ryan.

A pretty meaningless match really.
United were better at penalties on the day.
Roll on next weekend, when things really begin.[]
M


Roll on next weekend, when things really begin.[]
Click to expand... 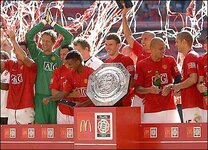 upset faces behind the goal[]

In the Mix, Rubbish collections

Diary of "A Black Dog"

Strangers on the Shore !