And to add to the glory, team skipper William Raison finished in the individual bronze medal position.

Last weekend’s event, held at Coruche, saw blistering temperatures to over 35 degrees during the official practice week as competitors tried to get to grips with the river and its stocks of small catfish, carassio, barbel-like borga, and odd mullet.

But plummeting temperatures and northerly winds for the two match days left some of the 11 competing nations scratching their heads.

On day one, it was the host nation of Portugal who got the best of starts with 12 section points coming from their five anglers – including an impressive four first places.

Mark Downes’ team of William Raison, Steve Hemingray, Matt Godfrey, Cameron Hughes, and James Dent showed consistency across the board to finish just two points behind on 14 and set the scene for a tense day two battle.

England’s tactics were based around four methods – a close-in whip line, 5m pole for small borga, a 13m pole line, and slider fishing at range for catfish. And, despite a slower start to the action on day two, they held their nerve to record two section wins and solid back up scores of four, five, and six points to end the day with 17 points.

This was three too good for Portugal on the day, and enough to pip them to overall team first by a single section point – England finishing with 31 points, Portugal on 32, and Belgium trailing in third on 40.

“There were fewer nations than normal, but all the World’s top teams were there and so to beat the likes of Italy, France, Belgium, Hungary, and Portugal on their home soil is an incredible achievement,” Mark Downes said.

“It was important to show maturity, fish patiently, and trust in the tactics and the young squad performed magnificently with the guidance of the older hands like William, Steve, Simon Willsmore, and Darran Bickerton.”

William was unlucky not to win another gold to add to his collection after a three-way tie on three section points with home-nation anglers Pedro Bessa and Antonia Marques. A weight countback put the England captain into third at an event which saw all five of the England anglers finish in the top 16 individual rankings.

“All the international teams are in awe of England’s anglers at the moment, this team has really gelled, and we’ve got a strong line up waiting in the wings too, so the future looks bright,” added Mark. 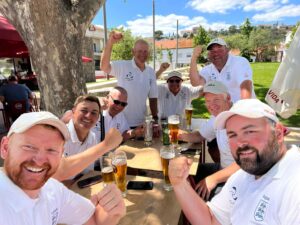 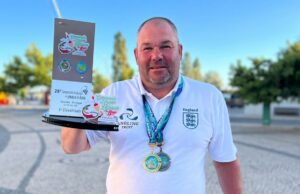