What a fantastic day out. My thanks go to Dave & Stu for arranging it. It was my first Pike match and to come 3rd realy put the icing on the cake. Just to meet the lads from up north and Dave and Stu was great, oh and not forgetting the Rotherham lads.....here it is my 5lb 12onz baby

....Look forward to fishing with you all again soon......Haydn

Here's the photos I took - you, Keith and Dave (with his double)

I'm sure Dave will have some more photos to add

Sure will have just give me 30 minutes []

You trying to confuse me [?]

Well here we are, on a wet, windy Friday we all met in the Castle Howard car park for what was to be a Pike Match/Fuddle.
Pegs 1 to 30 were reserved and as some will agree it was a heck of a walk to reach them, but was it worth it - cause it was []

Anyway we were soon settled in our pegs just in time for the first downpour of the day but it didn't last long.
About 10.45 am and Paul was the first to bank a pike, a nice one of 4lb 8oz which was also his first ever: 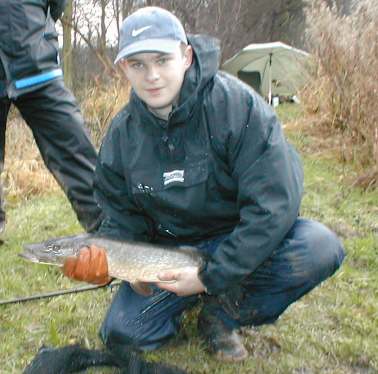 and then it went manic

I earlier had volunteered myself as the runner with the scales and there was a shout from Haydn from the far side of the length, he was into one and soon took the lead with this 5lb 12oz'er:

And just as it was being returned to the water Keith shouted out that he was also into and landing a pike of 4lb 10oz: 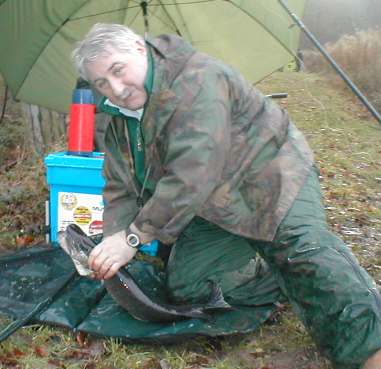 and before we could get it back into the water, Tony was also shouting for the scales with this handsome pike of 4lb 12oz that was caught on a plug: 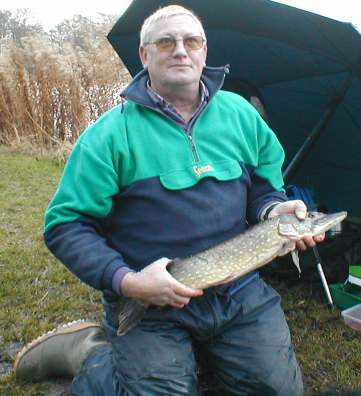 Who was the idiot that volunteered me for the scales - oh it was me, pass me the oxygen []

And then it went quiet except for the noise of chattering and the occasional buzzer being set, tested and set again. Did I mention that Stu had some nice buzzers, just in case you missed it, ask Norm [8D]

Another short shower and it was getting near the witching hour of 2.00-3.00pm. According to the local info, this is when the pike come out to play and play they did.

My nearest buzzer let off a short shrill and I lifted and struck into this nice but lean pike of 11lb 4oz: 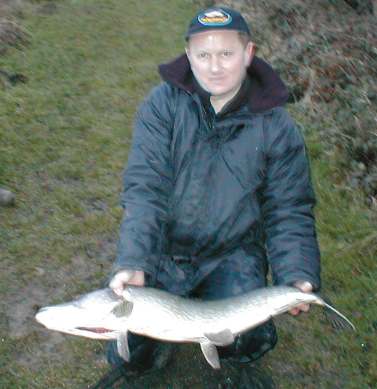 and a cast later into the same spot, and with the same lamprey, this pike of 7lb 1oz: 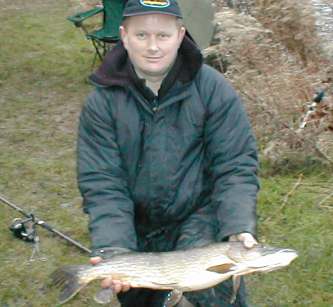 As soon as it was on the bank Stu's buzzer let rip for all to hear and he was into a pike. Off I went again with my little short legs running the banks. He managed a 6lb 6oz'er but unfortunately it was back into the water before I could get a photo

The final shout went at 3.30pm and the results were:


Did I mention that it went quiet between 11 and 2? Because someone decided to take advantage of a quick nap, well a long nap and yes Les he does give you a run for your money in the snoring decibels league, 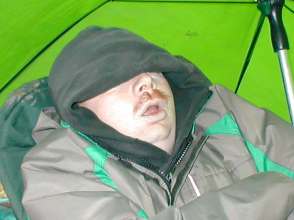 Looks like a caption competition coming soon, lol.
Are you up for it Simon ??

Well done lads,
Looks as if a great day was had by all.
Two fish on the same Lamprey!!!!!!(who said Yorkshiremen were tight [])

peter
i was one of the 5 troggs

as always these events are about fishing, talking, and generally extracting the pee out of each other and its the latter that tends to take centre stage,[]

as usual the northeast crew made the trip but why they bother to fetch any tackle is beyond me[][][]they could leave the tackle at home and have more room in the car and still catch the same,[][]

Norm i thought you was a pike expert [:I] if there's owt you want to know about piking just ask one of us yorkies[][][]
and Stu was only making a noise with his buzzers so that if you did happen to get a bite you would know what the noise would sound like[:0] if your buzzers had made a noise you'd have thought it was time to get up for work[][][]

Justin/Justout, i think you're right about Simons new name "Bubbles" (nice one Simon) some people will try owt to catch, even if it is flies[][][]

right thats it a good day and laughs and always nice to see you lads from the n/east and only sorry Andy could'nt make it,
(next time Andy) by the way put another toilet roll in the fridge[]

Do not resist growing old.
Many are denied the privilege.
G

Me also Tony, i'm bloody gutted mate, looking forward to meeting with the M/Ds again,but not to worry always another time mate,

Slept most of the day again, but at least the trotts seem to have stopped[:I][:I][:I]as well as the vomiting, aaaarghhhhhh i have it,.

catch me if u can
Andy,

quote:Next time the north east lads will sweeeeeeeep the board make no mistake

Dave when you said travel light i thought you meant tackle wise, not go to the gym and loose 3 stone[]

If you think about it teepee, the only reason that the North East boyz managed to get a placing was because we'd run out of Yorkshiremen []

It's a good job they bought Paul along []

or you`s will get this

hy all its paul, justins kids still havent stopped ribbinhim had a realy good day [not to note my first pike] look forward too the next meeting
paul

if it had not been for my quick legs and my stricking SKILLS stu would NOT have had that pike.......

Paul are you sure you were'nt born in yorkshire before moving to the northeast![]

Daz nice one quick legs eh! nice to have met Bernie & Haydn for the first time look forward to seeing all again,

Do not resist growing old.
Many are denied the privilege.
Last edited: Dec 28, 2002
L

Look's like i missed a good day out .Well that's just my luck at the present.Well done the lad's that caught commisseration's to the one's that didn't .Norm not caught again Nae Mind Aye you'll have to some fishing tuition of the yorkie's Dave&Stu LOL.

good day out went well hope to all meet again.all the best everybody for 2003.[][]

Have Corn will Travel Part 6