Can I catch Tench on the Waggler?

After a day bagging on Tench at my local estate lake last week, you might have thought I was all Tenched Out. I was kind of, but wanted to go back not only to let my dad get some of the action, but also to try to catch them on the waggler. I know I can catch them on the feeder, but would they play ball on the float?

As I said on my last report, I think location is key on this lake, so we wanted a peg around the same area as I fished last time. On getting there, the shallows were all cordoned off presumably because a swan is nesting with 5 eggs, and there was also someone on peg 24. So we walked down a few pegs and picked the first likely looking ones. It was only later I realised I'm back on peg 20, a peg I fished before that wasn't kind to me with only 3 Tench, and my dad on peg 19.

On plumbing up on the float, it confirmed the depth I'd guessed on the feeder, around 8'. It's pretty made how you can estimate the depth of a peg so well on the feeder. But anyway, this was too deep I felt, and unless the fish had moved around a bit, I had a feeling we would struggle.

Anyway, starting on the waggler at 8am, fish were soon fizzing on the sweetcorn I fed, and I had a few missed bites, but it was 9.26am before I connected with a small 3lb Tench. 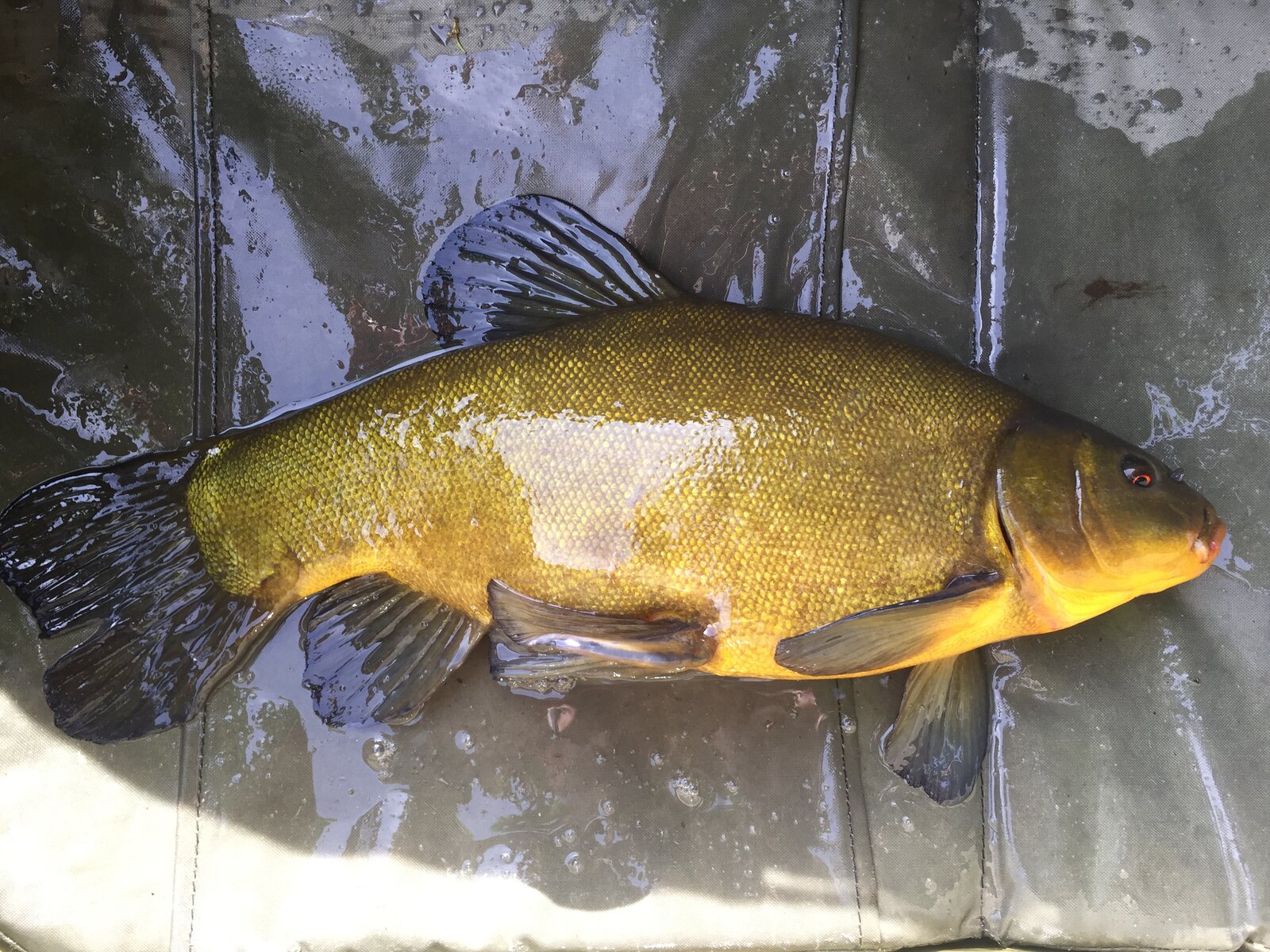 Meanwhile my dad had a Perch, and then must have had what must have been the smallest Tench we've ever had out of here. All Pike marked he told me as well. About 1.5lb.

I persevered with the waggler until 11am when I went on the feeder and third cast I had a Tench at 11.21am. 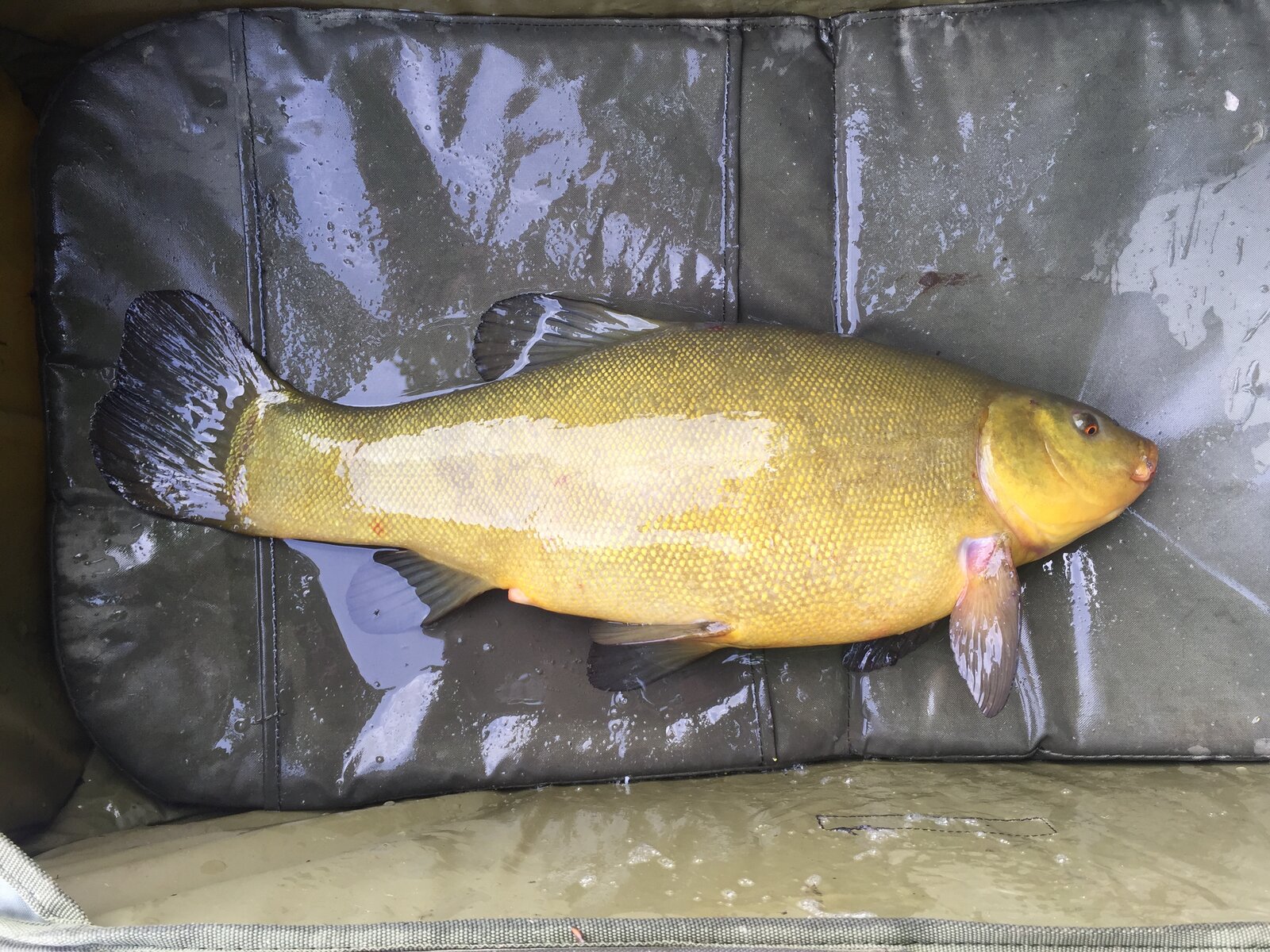 I kept feeding the waggler line and would try it again if any bubbles came up, but it was rare they did, and even if they did, they would soon disappear when I picked up my other rod. 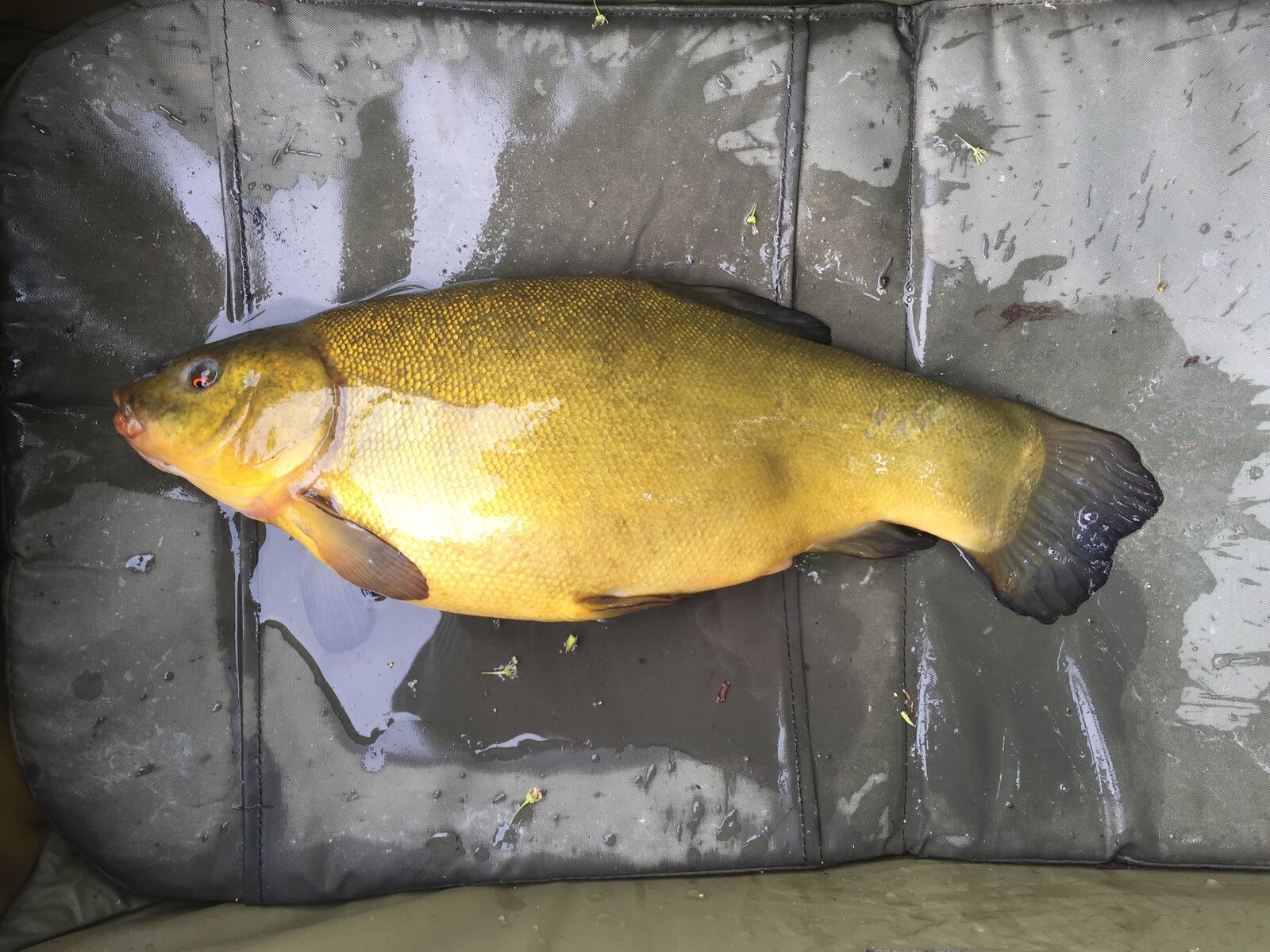 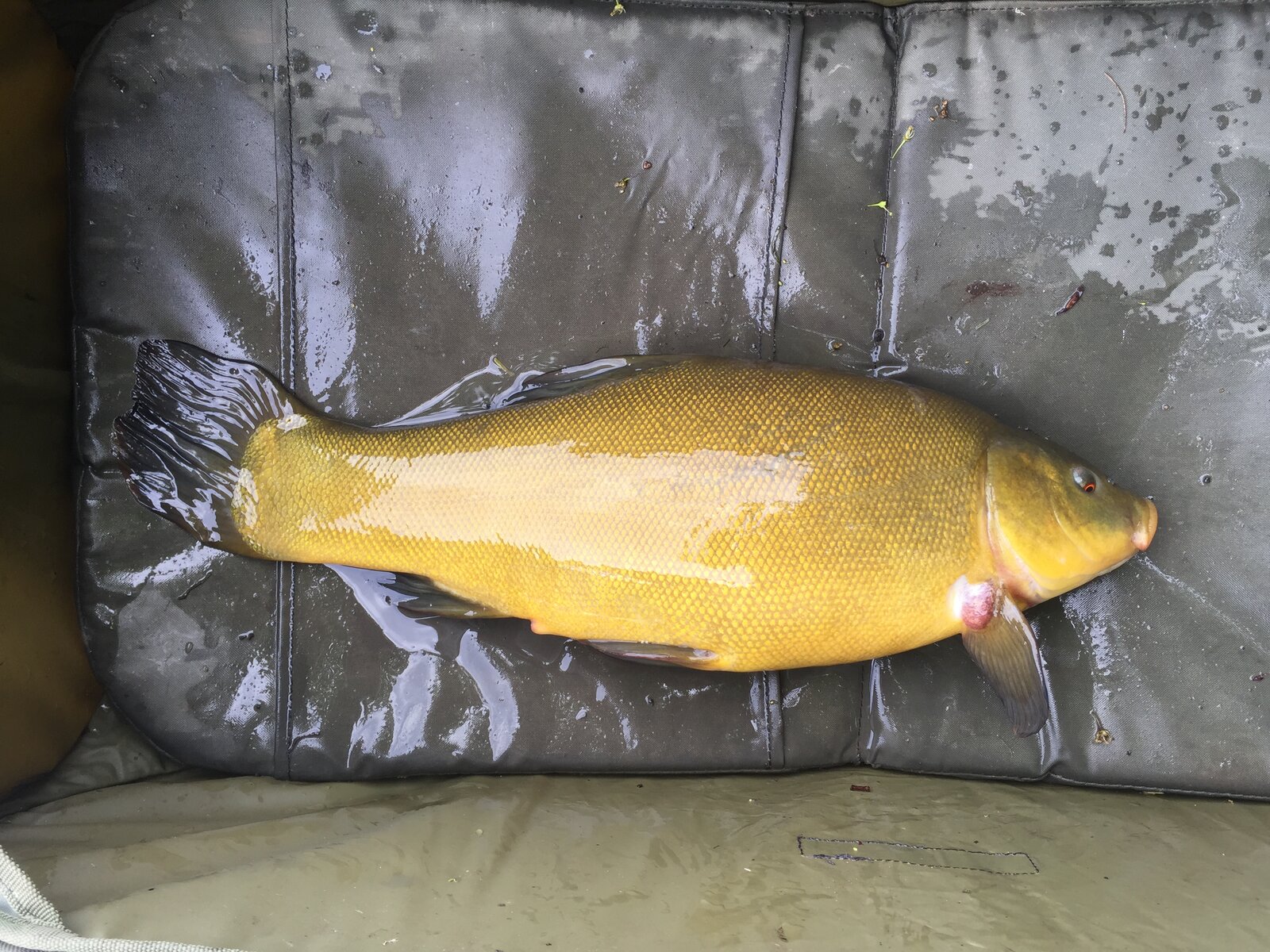 That was to be it for me. 4 Tench. Meanwhile my dad, fishing the feeder all day, had 3 Tench and 2 Perch. He was happy with one of his Tench that was pushing 6lb, but we also photographed his final fish as below. 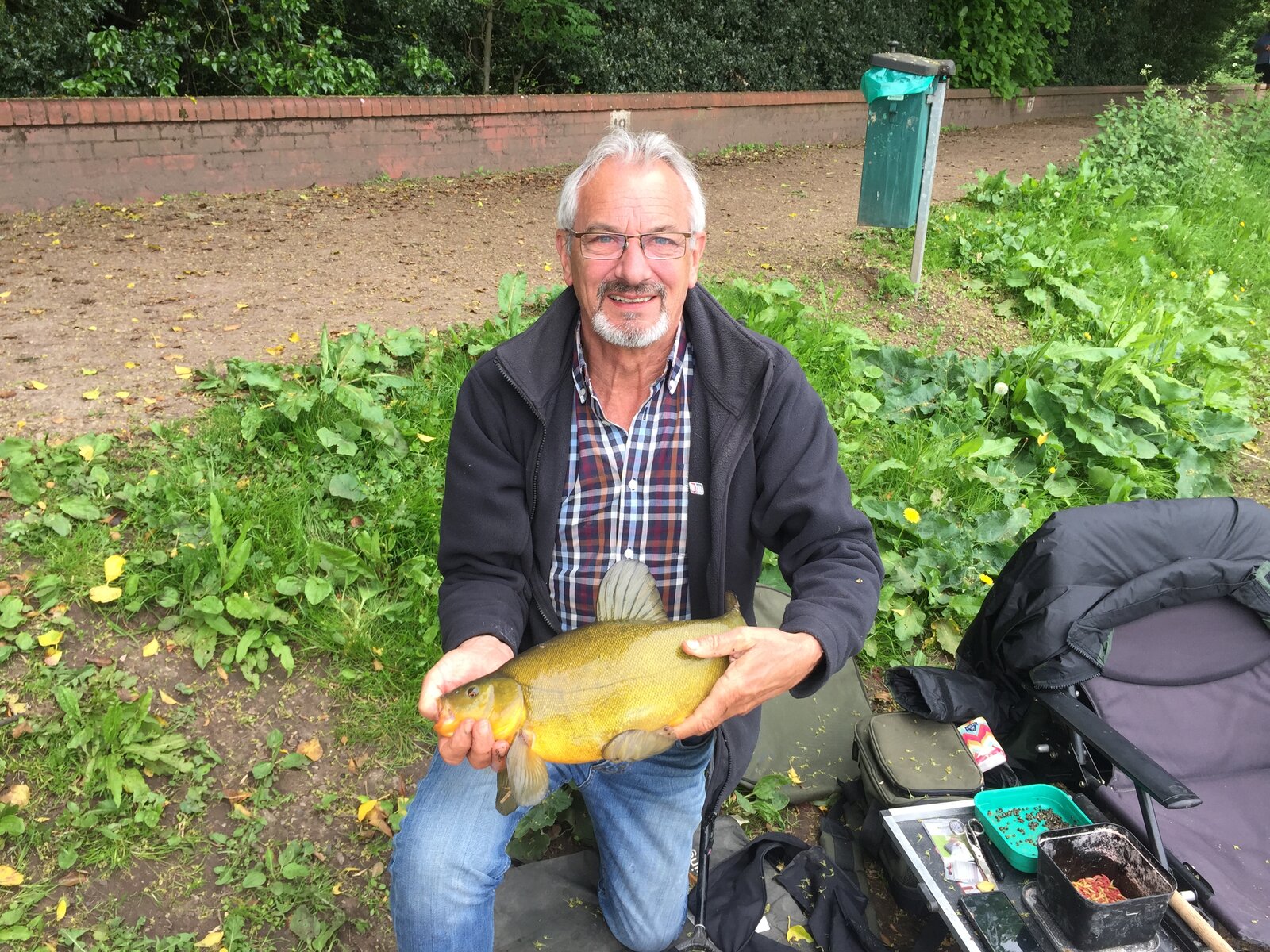 So in answer to the thread title, yes I can catch Tench on the waggler, but only 1 today, the other 3 came on the feeder, but I think the odds were against me in the deep peg today so I'm not going to write anything off. Would have liked to have been on pegs 24 and 25 though!

I said to my dad sorry I jinxed it by getting excited this time... he said his fault for jinxing it... but not a bad day really, just get spoiled by red letter days!

Oh and almost forgot to mention, the sight of the day was an Eel on the surface in Pikes mouth. At first I thought it was a snake as about 2lb. It eventually got away from the Pike.
D

Did you fish the waggler on the lift setup, that works a treat, float rises before sliding away it’s a lovely sight.

No mate it was fishing at about 25m out with a big part loaded 10' Drake Bodied Waggler. All about locating the fish on this place and I don't think they're quite ready to come close in yet. Saying that, my mate who's always there was there today. He's more of a 'purist' than me and would fish lift method on a 50 acre gravel pit! He did have 5 Tench from the higher numbered pegs today though, a few people were fishing but no one really hammered it today.

Cheers mate. I think the first ones a nice male.

Haven’t caught a nice tench for a while. May have to shadow @tincatim and learn from him. And how to catch barbel. And chub.

How to fish basically

For me It's all about having the right venues! Tight lines though.

I’ve fished the same pegs as Tim, and yet haven’t caught barbel

It's still pretty amazing what comes out the Dearne! I look forward to next seasons reports if it hasn't been destroyed by the EA.

A lot of it has, but I’ve had a few walks and found a few little spots I’m going to try in June. But I imagine I’ll be try some other stretches. There’s a storm drain nearby with koi swimming round in it

Well done Steve, I have to say that all those fish appear to be in cracking condition.

Well done to you and Dad for catching a few.........The waggler is a lovely way to catch fish if weather conditions allow....
C

Some cracking tench there mate nice one

Cheers all. If you get a nice southerly as per today, may the wind always be on your back, and sheltered too!

Zerkalo said:
Cheers mate. I think the first ones a nice male.
Click to expand...

Totally correct it's a male.

Going on from that statement, when asked would you rather catch a 5oz gudgeon or a twenty pound carp and the answer is...........

Tinca Steve said:
Going on from that statement, when asked would you rather catch a 5oz gudgeon or a twenty pound carp and the answer is...........
Click to expand...

Deffo a 5oz gudgeon. Ive been fishing a lake that is almost entirely carp for the last 12 months, but for me it has got a little boring now!

Some lovely Tench there buddy. Has me itching to get back to Napton.......