To me, Buscot is a stretch of the Thames, but I recently found out about a still water that could be fished day ticket that holds a good head of silvers and hasn't been overstocked with carp. A chat with @Jimpanzee gave me a few pointers, and I headed off to fish it on Sunday morning.

I got about 2/3rd there, and realised I'd forgotten my nets (not the first time, but I keep them hanging from the shed roof to deter mice, which also puts them out of eyeline). So turned around and went home to get them.

Once I got there, unloaded the car, I'd had a maggot escape. Guru maggot boxes are rubbish, that one won't get used again. Once I'd emptied the car (even got the spare wheel out) I was ready to fish.

I chose peg 26, which was a bit of a walk and a debut for my Preston Barrow, which was needed as I'd bought the kitchen sink to cater for pretty much all eventualities. 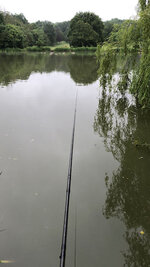 I set up a 13ft Shimano XMS wagger rod, 506m reel loaded with 2.5lb Maxima with a Drennan loaded waggler (insert). 18 Preston hook to Sensas .085 super comp hook length. I had about 4ft of water at about 10-11 metres, my initial setup was about 8 inches over depth, 3 nbr 8s down the line.
I started loose feeding red maggots (with a handful of bronze mixed in) and hemp. Target area was left of the tree in the pic above.

Started getting a few bites, then had a couple of skimmers, largest about 12oz, so just starting to get the bronze colouring. Decided to knock up some groundbait, which was a mix of Sensas feeder mix and some Decathlon vanilla biscuit crumb. (basically some left over bits and pieces), mixed in some very old pinkies and fed 3 balls, trying to keep them low and not make a big splash. 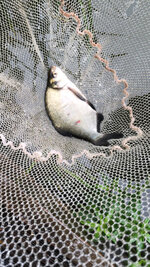 Back out, hit into somebody bigger and lost it, with the hook link parting mid point. Set up again and caught a few more skimmers about 12 oz, while unhooking one, the hooklink broke again. Spool of hooklength went in the bin, and I went up to .10 (2.5lb) staying on an 18.

Caught a bream of about 4lb, and a few more skimmers, and as I was fed up trying to waggler fish under a brolly, decided to go on the pole.

Out comes my Silstar Classic (25 years and going strong!) Nbr 6 elastic, Maver JH4 4 x 16 carbon stem, shotted with a bulk of 8s, and then 3 down the line. Not sure if the small break while I set up the pole (I was also gassing to some other anglers) meant the skimmers had moved out, but started catching roach, perch and a couple of gudgeon. Then another bream, and then skimmers were back, until I hooked a small carp which I landed, but it had torn through my swim which sent things quiet. Back on the waggler, found I could snag a few more fish on the drop if I was a little further out. Last cast of the day I hit a carp which proceeded to steam halfway across the lake, with me backwinding furiously before loosing it, and coming back with a tangle, so decided it was time. 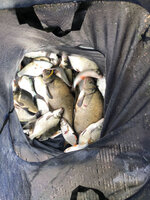 Really pleased with the day. If I fish it again, I'd groundbait from the off, probably start on the pole, and have a heavier set up to hand so I can try worm to see if I could get more of the larger bream.

I did go through the car again to check for any more maggot escapees before loading. (its actually the wifes car, and she is pretty scary at the best of times).

One final point, when loading the car, I noticed my (new) barrow had mud on one wheel, only in one place. Further investigation, and it was seized and would only turn with a lot of effort. I'm guessing the bearings have gone in it which isn't great considering its very low mileage. (about 800 meters in total).

Sounds and looks good to me

Often thought of giving it a go there but just a bit too far for me really.

Nice report nice mixed bag, grease the bearings should solve the issue or your grease has gone hard and lumpy or just gone either way a re grease is in order.

Well done @adriang - great little read. I’ve been told the fishing has been slow this year after they drudged it in the winter. Great haul and it sounds like you had a really good day.

P.S That is one way to store maggots for your next session, leaving them loose in your missus car. Perhaps offer up your suggestion in this thread for others to try https://www.maggotdrowning.com/forums/threads/left-over-bait.234150/

Well written and enjoyable report, sounds like a great place.

There is an article in this week's Angling Times about the the place.

A
Thames@Tadpole - tough rewards on hemp and tares

Back on the bank

A Proper Way To Spend A Day Off………

Enjoyable day on a new venue.