I returned to Viaduct today in another attempt to catch my first really big roach. Headed back to middle lake on the advice of the owner. During my session earlier in the week I discovered that the bigger stamp of fish were coming on the feeder, so no mucking about today, free running maggot feeder on a twizzled boom was to be the only approach.

I started by clipping up tight to an overhanging tree, and instantly I started catching small roach. I tried 3 maggots on the hook, but bites didn’t seem to come as readily so I switched back to double red.

After an hour of casting every 3 minutes on average I struck into a bigger fish. I thought it could be a skimmer but it felt to jagged a fight, suddenly I saw a flash of gold, next thing I knew my first ever decent sized Rudd was in the net. Chuffed! 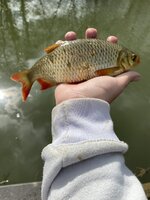 had a couple more roach of a similar but slightly smaller stamp before stopping for a bite to eat. 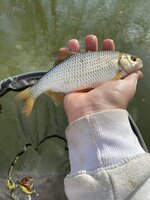 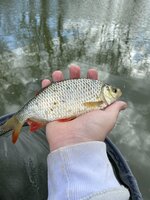 after lunch I was struggling to get into a decent stamp of fish again, catching smaller roach.
I struck into what seemed a tentative bite and I knew instantly this was a much bigger fish, couldn’t tell what but again I knew it wasn’t a skimmer. I then slipped the net under by far the biggest perch I’d ever caught, so chuffed! 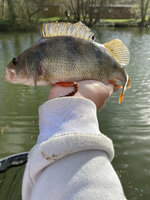 After this it was a dumpy little roach a Chuck until it was time to pack up.

So happy to of caught my first ever big perch!

Sounds like a really good session to me mate well done. Some lovely looking fish there

. The third photo is a rudd too.

Well done Joe! Sounds like a a really enjoyable session. Bigger stamp of rudd are beautiful fish aren't they?

They really are! Little bars of gold

. The third photo is a rudd too.
Click to expand...

My fish identification is appalling

Joe C said:
They really are! Little bars of gold
Click to expand...

I certainly am! Will be a good target water until the rivers reopen.

Nice one Joe, well done. Rudd are one of my favourite fish, and that perch looks a cracker.

Nice one Joe, I can’t wait to get back to fishing Viaduct

Another days fishing at viaduct