Second match of the season saw a return to Grange Farm Pond just outside Thirsk. It’s a natural, unstocked pond and the predominant species are roach, skimmers, proper bream, perch plus tench and a few carp, chub and the odd pike.

We held our float only match at the same venue last year and had a couple of matches on the same place in 2019 – the most relevant one being this: https://www.maggotdrowning.com/forums/threads/pretty-good-at-grange-farm.212813/

Since the start of lockdown the caravan site at one end of the pond has been closed and the lake has been shut from time to time too. However the owners, ably assisted by Simon the bailiff have used the time to good effect – all the pegs along the roadside have been replaced and are now strong, flat and easily accessible – work is continuing around the pond to replace the others where necessary. Loads of pruning and tree felling has also been undertaken and the debris in the small pond has been removed making it fishable once more. Ultimately there will be approximately twenty pegs around the pond available.

Since we only had nine fishing this week we just used all the new pegs on the roadside (pegs 1 – 8) and at the base of the lake (peg 9). The caravan site reopens on the 17th so therefore access wouldn’t be needed and we were able to park behind our pegs. 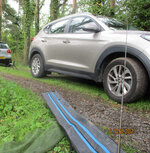 I pulled out peg three so was just beyond half way along. The cold spring has really retarded the plant growth – many of the lilies haven’t hit the surface yet so it’s difficult to ascertain where they actually start and finish – I had numerous big green leaves in front of my peg but a couple of feet down. 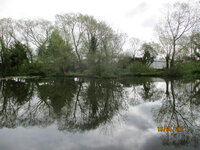 Depending on which weather forecast you looked at we were due horrendous thunderstorms, frequent showers or just rain and indeed it was wet at home but not long after arriving at the venue the grey skies melted away and we were left with blue sky, fluffy white clouds and plenty of sunshine.

Grange Farm Pond is an old Victorian clay-pit and has depths to suit - eight or nine feet being not uncommon. I’d remembered this from previous visits and knocked up some pole rigs to suit. I also had some wagglers on winders for use on Lockwood Beck and with a little alteration they were perfect for here too. My main line of attack though was going to be the feeder and I had a couple of rods set-up that don’t see the light of day were often – firstly a Shakespeare Alpha from the late 1970s that I’d be using with a swingtip and secondly an 11’ Tricast Trophy tip rod. Using too stiff a rod when fishing for skimmers is a recipe for hook-pulls and the Alpha being so soft helps enormously in that respect. It’s not a casting tool but the pond is only 35-40 yards wide and I was just chucking half way across anyway.​ 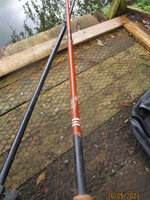 At the start I had a look over the 8m pole line - which is the bottom of the gentle slope down from the edge of the pond – but with nothing forthcoming I potted in a couple of small balls of groundbait and a few casters and grains of corn over the top. While that settled I had a couple of quick casts with the feeder to get some bait in. Groundbait incidentally was Boland Black Bream with a little Sensas Crazybait added just for the fishmeal content. 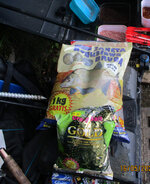 It was thirty minutes before I got a bite on the tip (which I missed naturally) but I got another next cast and a little roach was safely in the net, followed by its twin a few minutes later. A switch to worm got me a chunky little hybrid of 6oz or so but then it all went dead. I went back out on the pole but was only getting very tentative bites from what I presumed to be very small fish – George to my right was fishing pinkie on the pole and catching a few but they were all very small fish and probably the same stamp that couldn’t quite manage the full-size maggot I was presenting. 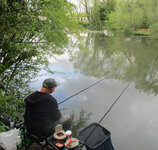 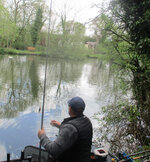 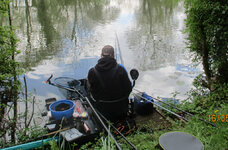 It was still quiet on the feeder but Tony to my left had had a couple of fish on it so I figured it was the best method. Whilst filling my feeder I thought I smelt the pungent and very distinctive aroma of Pol Vitamo, although enquiries regarding who was using it drew a blank. It must have been something in my groundbait but I always have a bottle in my box, so with nothing to lose I gave my worm hookbait a liberal coating. Probably just coincidence but I got a beautiful, slow bream bite as the swingtip slowly rose and moments later I had an 8oz skimmer safely in the net. 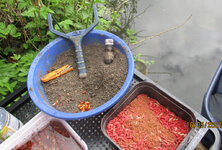 
I was getting tiny little indications and occasional liners so I was confident that there were still some fish in my swim, it was just a case of persuading them to eat my hookbait, so I ran through all the possible combinations of maggot, caster, worm and corn, eventually getting another slightly larger skimmer on double maggot. I’d been told earlier that the bream had finished spawning in March – judging by the textbook spawning tubercles on the head and body of this fish and a similar crop on another fish I caught later I rather think a second spawning is likely to take place.​ 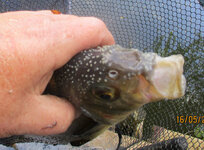 As the afternoon wore on the blue skies above began to disappear and the sky darkened, distant rumbles of thunder indicated we were likely to get a bit damp. I stood up briefly to grab my brolly from my holdall and sitting down again noticed the swingtip was swaying limply in the breeze. Assuming I’d knocked my rod whilst getting the brolly I just turned the reel handle to take up the slack – after a couple of turns I realised I’d had a drop-back bite and picked up the rod – the nod, nod, nod on the end indicated another bream – about 2lb this time. The rain arrived with a vengeance but fortunately it was only a brief shower and other than a bit of drizzle late on it stayed dry the rest of
the day.​ 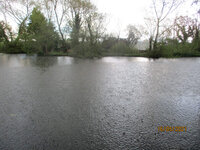 I gave my feeder swim a rest and had another look on the pole – thirty minutes saw me a get a single roach, so I gave it up as a bad job and lobbed the feeder out once more. A Pol Vitamo anointed worm accounted for another 2lb fish and then three red maggots saw me get a final fish that might have scraped 3lb. I had no idea what sort of weight I had and as far as I knew only Tony had snared a few skimmers – although Steve (who usually makes a habit of catching big perch) had caught a small pike.

We started the weigh-in down at Acko on peg one – he’d fished the pole most of the day and had no shortage of fish, sadly all of the junior variety and he weighed 2lb 3oz 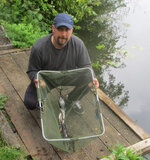 When Tony pulled his net out I knew I’d beaten him, his skimmers totalling 3lb 15oz 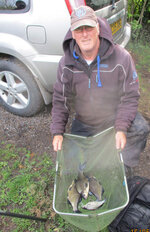 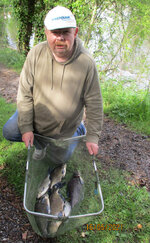 George had a busy day on the pole but rather like Acko found better fish hard to come by and tipped just 12oz onto the scales. 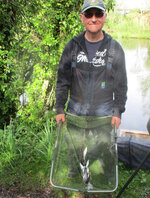 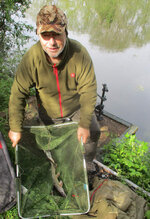 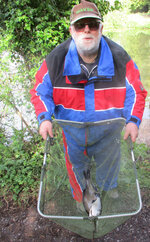 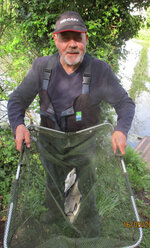 There was a surprise on peg 8 – for the first time since 1973 Barry had a used a float other than a Stillwater Blue – possibly why he only weighed nine ounces. 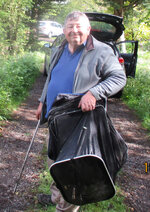 Down at the end of the lake Frankie had a couple of little perch but had already returned them by the time the scales arrived.

If anyone’s contemplating a trip down to Grange Farm don’t forget to book in advance. 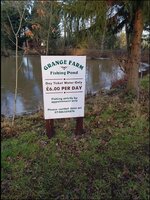 Next match we’re at Lockwood Beck Reservoir on 30th May – the maintenance work on the dam wall still hasn’t been completed so we’ll be in the woods and, depending on numbers, possibly beyond the feeder stream onto the moor.

Great write up per usual Simon,

Love the pics of all the anglers - nice write up
H

Smashing write up - look forward to your reports.

You Messed That Right Up Didn’t You!
2

A day of firsts…

Best match of the season so far