Mescar in the original lake has Perch over two pounds and the top lake at Lloyds Meadow similar unless you head up to the lake district were Ullswater and Windemere both throw up similar sized fish.
I was told there were plenty in Wyreside around this size but dont know of anybody who has caught them. 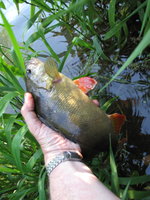