A new venue for me yesterday afternoon. It’s a pretty day ticket lake in the countryside about 15 minutes away with the last few miles down some very narrow roads. It has had restricted free membership added to it as it was getting busy during furloughed times, and I’ve only just got to the head of the waiting list. 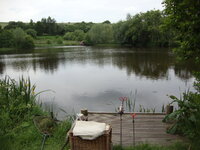 There were only two already there, a couple of local retired brothers who were catching plenty of smallish fish. As I was setting up there were a few fishing topping close in, so suspecting rudd I dropped a shallow bait in the area and after missing the first two good bites I had a surprise when the third produced a 1lbish barbel. 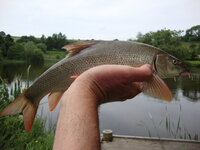 The method feeder produced an early 2.5lb carp so it looked like a decent total weight was on the cards but after that the fish size decreased dramatically as a varied mix of 45ish new stock fish came to the net, mainly tiny carp and tiny tench with some better roach and ide to 8ozish and a solitary small perch. 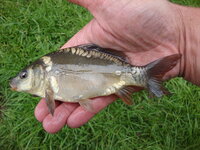 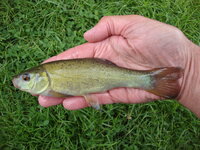 The method feeder produced one better carp of 8lbish late on . 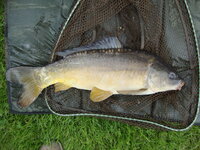 The full fishery details are at Betchcott - Shropshire.
B

Three or four pounds bigger would have been nice, but they are cute at that size. I think I had seven between 6oz and 2oz in the end.