Wow brings back memories does that. I never had a quad though but our access was to park at the railway crossing just up the hill in the meadow, about 70 yards.
S

Wise Owl said:
Mate i Hair rig a Plaggy Caster in a short hair then 2 real ones on the 14 hook, one up the shank pushing the fake one out and the other nipped on the Point, ive had the rod hit me under the chin
Click to expand...

Oh yes, I have too, but have also had little dinks from what I thought were dace, only for the rod to arc over as an angry barbel tears off downstream !!!
Y

carphauler said:
Just found the picture with the blokes on the quad, water was lower than I thought. 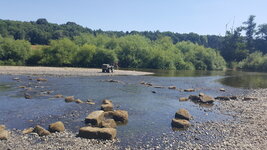 Is that the same place where there’s a video of Adrian Whittle is sat in the middle on his box and catching Barbel.

Yosemite Sam said:
Is that the same place where there’s a video of Adrian Whittle is sat in the middle on his box and catching Barbel.
Click to expand...

That's the Wye, great video though! I'd love to fish the Wye one day.

Back to the 3 ft twitch,,,, I fish the aire fairly often,,, using heavy feeder tactics,,, a very long hooklength., sometimes 5 ft plus,,, and worm/bunch maggots and the takes from barbel could be said to be heartstopping at times,,, just about always hooked in the top lip area and never had one swallow the hook,,,, I never strike at the taps and small movements of the tip as there is that much rubbish coming down,,,,, as for feeling the meat trundelling through its very hard as the current can be very hard to master,,, that is the reason why I use heavy feeder/lead tactics

Not much better feeling then a 3 foot twitch, whether they happen regularly or come out of the blue as this one did.... a Blacktailed Barbel. 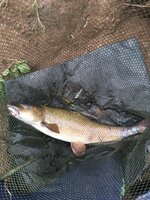 I'd had 3 or so Barbel in the morning before the sun came up then bites tailed off and my dad came and fished the next peg in the afternoon. It was midday, and the reason I remember it was the power of the bite, really powerful 3 foot bang on my Barbel Rod that came completely out of the blue as hadn't had a bite for several hours. It turned out to be not the biggest fish at around 6 or 7lb, but when the bite came I called out to my dad "This is a BIG FISH!".

There's nowt better than a rod tip motionless for hours then BANG,,,,

As for hair rigging,,, always used it on the trent,,, but never on the aire,,, mainly because on the trent hook bait was usually pellet whereas on the aire its mainly worm and maggots,,,

The tail of three fives.
2