Perfect for the job! I'd go with the 4oz for barbel - it'll take a 5oz tip okay when the rivers run a little faster

Just a few suggestions in Angling Times this week. That new Shakespeare is as cheap as chips at 50 quid’ish. 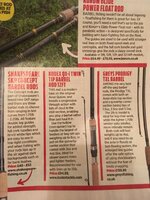 Thanks for all the suggestions.
I’m really impressed by the quality of the Stradic rod, does anyone know when these rods were made and where the Stradic range of rods sat in Shimano’s line? I’m guessing they were an expensive rod in their day

I bought mine new shortly after I moved down to Wales with an eye to using it on my now fairly local Wye so would be about 2010 but it was very old stock and the shop was clearing all of his coarse tackle, I bought along with a Drennan IM8 bomb rod for £30 each (I know absolute bargains). I think the Stradic rod range was around in the early to mid 2000's and would have been towards the top of the shimano range at the time. I agree with you that it makes a very good river feeder rod capable of handling fairly large fish and casting decent size feeders to the far bank of most rivers without being an absolute beast of a rod

Today’s session, a tale of what was, and what could have been....