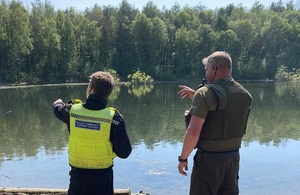 Northumbria Police and the Environment Agency carried out joint patrols in Washington.

The crackdown saw almost 200 fishing licences checked and people reported for offences including fishing during the close season, unlicensed fishing and fishing using illegal baits.
The Fisheries Enforcement Team worked with partners to target specific areas where illegal fishing has been reported.
This included an operation with Northumbria Police to target fishing offences and anti-social behaviour at an urban fishing lake in Washington, with one person reported for illegal fishing at Corgi Pond.
A second operation with Stockton-on-Tees Borough Council’s Environmental Crime Team tackled illegal fishing and camping at Stillington Forest Park, where two people were reported for unlicensed fishing and a number of people were asked to leave and remove tents and litter.
Patrols were also carried out in Tynedale, Gateshead, Durham and stillwaters in north Stockton where 10 offences were detected.

It was great weather over the Bank Holiday and it was good to see plenty of anglers out enjoying our region’s beautiful scenery.

While the majority of the anglers we spoke to had the correct fishing licence and were abiding by the law, 27 of those checked were found to be in breach of rod licence and close season legislation and were reported for it.

People who don’t buy a licence are not only cheating other anglers and the future of the sport, but they are running the risk of a criminal conviction and fine. There is no excuse.

By working together with our partners we can combine our expertise and knowledge and share resources to continue to protect wildlife, detect crime and improve the local river and water environment.
Click to expand...

It is currently the ‘close season’ for coarse fish which remains in place until 15 June inclusive and aims to protect fish while they spawn and give them the chance to recover.
The Environment Agency acts on information received from the public to target their patrols to areas where its suspected illegal fishing is taking place. They work with police and other partners, supported by the Angling Trust, to gather intelligence.
The Environment Agency acts on information received and illegal fishing can be reported on the 24-hour Incident Hotline on 0800 80 70 60.

You can buy a fishing licence online here
C

As far as I am concerned, environment agency bailiffs are like a yetti, they might exist but you never know until you see one.
So far I haven't seen one in 30 years.
Last edited: Jun 4, 2021