Just a heads-up for all the tackle collectors.....

I thought you might be interested in the auction sale which will offer the earliest and most important fishing reel circa 1760’s. Not just the oldest but the very first with a multiplying mechanism also the first fitted with a level -wind. The maker -ONESIMUS. USTONSON - the most important London maker that made the rods and reels for successive British monarchs. In addition the finest HL Leonard rods and reels whose owner was the finest American fly fisherman that has ever lived and used alongside the great angling authors GEM Skues and Frederick M Halford. The most important sale of tackle in recent times
The sale is scheduled to take place at -ANGLING AUCTIONS UK 2nd October 2021

Angling Auctions are pleased to have the opportunity to offer for sale the Walter Durfee Coggeshall tackle collection. The contents include early H L Leonard rods of great historical importance together with the man’s personal reel collection.

W D Coggeshall was an American living in London at the beginning of the 20th century. Although he has remained virtually unknown in his country of origin he was described by the legendary author GEM Skues to be ‘America’s finest fly fisherman that ever lived’. Coggeshall’s personal tackle collection, that had been in storage for about a hundred years, suddenly emerged at an auction in Dorchester England on the 20th February 2020. It contained 4 HL Leonard rods and two reels which took the usual collecting criteria to a new level. Not only were they extremely desirable for their own status, rarity and provenance value but had actually been used alongside the legendary authors in angling history GEM Skues and Frederick M Halford on the chalk streams of England in the early part of the the 20th century.

Therefore these are the most important HL Leonard rods and reels to come to auction in recent times and have to rank alongside the GEM Skues 9ft rod which the great man considered his ‘WBR’ (world’s best rod) displayed in the Fly Fishers Club in London ALSO the10FT FORMER COGGESHALL ROD that was purchased by Carl Otto von Keinbush of New York and now displayed in the Fly Fishers Club New York.

In addition included will be Coggeshalls unique collection of harling reels and rod which will be an auction first for that specialist field of fishing.

The article ‘Walter Coggeshall Collection’ by Graham Turner, author of the definite reference work, ‘Fishing Tackle : The Ultimate Collector’s Guide’ appeared in the ORCA reel collector’s association of America, July 2020.The article contains his researched material which reveals the historical importance of the rods and is hereby presented as an introduction to the sale of the collection.

In addition to the WD Coggeshall Collection the sale will also include what as been described as - ‘ The Holy Grail Of Collectors’ Reels’ thus the world’s most important and desirable antique fishing reel - Ustonson’s Original Multiplying Winch circa 1760’s. The world’s first reel with the multiplying mechanism and fitted with the earliest level -wind mechanism and a century before Mark S Palmer of New Bedford was granted the earliest American Patent No 27305 for a level-wind on February 28th 1860.

GT gives it this classification based on 50 years collecting, in which he assembled and disposed of two of the most important collections including the Hardy Bros. ORIGINAL PERFECT 2 1/4 INCH, made in 1890, which made a record auction figure of £17,500 -($24,121) in the 1990’s and went on to sell for £45,000 - ($62,025) ALSO his book - ‘Fishing Tackle : The Ultimate Collector’s Guide' is the definitive reference for collectors in more than 30 countries. He consider the Ustonson Original Multiplying Winch more important than even the Hardy Original Perfect 2 1/4 inch reel. It has been a legend since Ustonson invented the very first reel with a multiplying mechanism in the 1760’s and this is his original model. It was his research that provided the first complete record of the Ustonson family dynasty 1760’s to 1855. The Ustonsons' together with other London tackle makers supplied fishermen in North America prior to the first home grown makers starting in business circa 1830 and therefore pre 19th century there is a shared history.

chefster said:
I thought for a minute @Neil ofthe nene was selling his gear

with a very rare and historical set of pegs 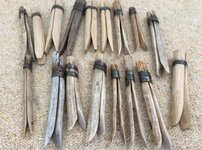 chris1967 said:
with a very rare and historical set of pegs

I wish there was somewhere in the UK - The National Coarse Fishing Museum. It would contain a comprehensive itinerary of everything coarse fishing from today going back to the 19th century. What a visit that would be!!!!!!!!!

chefster said:
I thought for a minute @Neil ofthe nene was selling his gear

SpenBeck said:
I wish there was somewhere in the UK - The National Coarse Fishing Museum. It would contain a comprehensive itinerary of everything coarse fishing from today going back to the 19th century. What a visit that would be!!!!!!!!!
Click to expand...

Pride of place would be a Shakey box

SWMBO bought me a set of three of the new Delkims and receiver for my birthday a couple of weeks ago... thats more arms and legs that I would have spent