Well at least you'd have hooked into something, like I didn't.
M

Take some of your lasses knicker elastic sly just in case the sturgeon show up.

well there is that

Have fun gents. Alas, once again I am unable to join you as I will be sporting a hangover with relatives down sarf..

Oh well, enjoy the time before the hangover

You don't think we put him off last time do you?...after all, we not seen him since. I just hope @billcarpman shows up.

i have thought the same thing about mick as well

Yup, 2 we been fishing with, not to be seen again. I was thinking it could be my aftershave.
Do you think MD will have us in the pairs matches?...just a thought.

You don't think we put him off last time do you?...after all, we not seen him since. I just hope @billcarpman shows up.
Click to expand...

ukzero1 said:
Yup, 2 we been fishing with, not to be seen again. I was thinking it could be my aftershave.
Do you think MD will have us in the pairs matches?...just a thought.

have you only just realised that fact
probably not,or at least not together
and yes it is boy

Fishy Medic said:
You aint put me off .. yet
Click to expand...

Yet?...hmmmm, to me that shows the thought has crossed your mind.

How did the day go?

Myself and @sly turned up at Aston and it didn't look too bad, at first. After a sarny and a brew we parked the car up to find @billcarpman sat in his car waiting for us. We made a decision on pegs and got set up. Then it started, winds, rain, hail and even tried to snow, but were we put off? well, that's up for negotiation.
Not a lot was caught to be honest but there was a match on one side, 4 or 5 bivvy's on another side and we were in the middle, but, we soldiered on catching a few bits. @billcarpman, although not bagging up, caught a few, myself and @sly were struggling a little until this came along (1st photo), a carp weighing in at 10lb 3oz on the waggler rod, 4lb line and size 16 hook with single maggot...foul hooked. Now, @sly, being the man he is, said I was playing to the crowd, and it took quite a while to get it to the net, but if you've done the same then you'll know just what a fight it is.

@billcarpman was still catching the odd few, my peg went dead on both float and feeder and at 3 o'clock it was time to pack up. Now how did the weather know? because it came out all bright and sunny. @sly was on the pole for the last half an hour or so then this came along (2nd pic). It made him work for his prize but was worth every inch of the battle, a 9lb 7oz'er on a grain of corn... 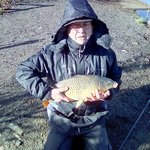 You can tell how cold it was by the way he's wrapped up, oh it may look nice and sunny, but it was positively rubbish weather. Even those in bivvy's packed it up as a bad job. Very little was caught by the match anglers and if @billcarpman had've been in it I'm certain he would have been placed, possibly even won it.

For those who are thinking of going to Aston, the tackle shop has had a major refurbishment and is very well stocked.
Last edited: Mar 18, 2019

hello all,by the time i`d got to the other side of rotherham,i`d had strong winds torrential rain and sleet/snow,didnt think things could get much worse.
headed for caff as usual,halfway thru sarnie realised forgot landing net head,2 choices go fetch it or buy another bigger one,no contest a new one,met @carpmanbill so 3 of us were going to freeze we just didn`t realise it then,as usual Pete was in first,as usual Pete caught first,the grin on his face would have lit yorkshire up,"at least i aint been water licked this time" he shouted,and nearly everybody on the pond heard him.
set my peg up pic 1
aint had a peg that neat for years cast out maggot feeder full of hope,no hope as it turned out,45 minuets later a roach,just after that a bream or as some witty bugga called my last one a blade,maggot died a death so went on pellet feeder with pellet,wafter and sweetcorn,sod all,kept hearing splashes from pete`s side and from bills side,sadly nowt from mine,eventually admitted defeat and used the pole had 4 small silvers then that died so went back on mag feeder and caught my smallest fish
pic 2
as i was sat there sulking i looked towards pete and thought he stuck on bottom,cue some mick tacking,untill his rod started to really bend,my face dropped and i thought bugga he is going to be an insufferable head if he lands it and despite all my abuse and mick taking at him he did
video 1
so congrats,as time was getting on i went on pole again with sweet corn i had one bite and got a carp,oh the mick taking was going to be brilliant untill it was weighed and smaller than pete`s,all in all a pretty crappy day,the wind and rain didn`t help and the hail helped even less,but at least we got to meet another drowner so the day wasn`t a total loss
and as a final kicker the new bigger landing landing net i had bought earlier is 2 inches smaller than the one i left at home

Sly,Sly Sly, missed a trick there, surely you realised that foul hooked fish don't count and should be returned without weighing !!!!!!!!!

9 things you need to know about Fishmark, the Kitemark for Clubs …and now Fisheries TOO!