It's not just the end eye. looking at the other couple of pics that show the top section, it seems a couple of the other whippings also look black.
T

It always puzzles me why sellers don't disclose all faults. Do they honestly think the buyer won't complain to eBay about selling something which has faults which are not described in the description?.

A couple of things are worth mentioning for those browsing with the intention to buy such rods.

1) Spigot joints. It's always good to see the joints assembled, the gap is important. On a new rod, I'd expect a gap of around 15mm (+- 3mm or so). 10mm wouldn't be terrible in an older rod. 10mm to 5mm and I'd be wary. Less than 5mm would have me expecting a very low price or avoiding totally. It's an indicator of lots of use or someone ill-advisedly rubbing down the joint. That applies to the joint between butt and middle sections. The gap between tip and middle is usually smaller from new. Anything with little or no gap is to be avoided completely.

The rods on the left are current models and haven't seen a great deal of use. The spigot smallest spigot gap is slightly less than 13mm, the bigger just over 15mm. On the right are two rods nearing 30 years old. The smaller gap is on the rod that has seen greater use. It's still over 12mm. The other gap is just shy of 15mm. 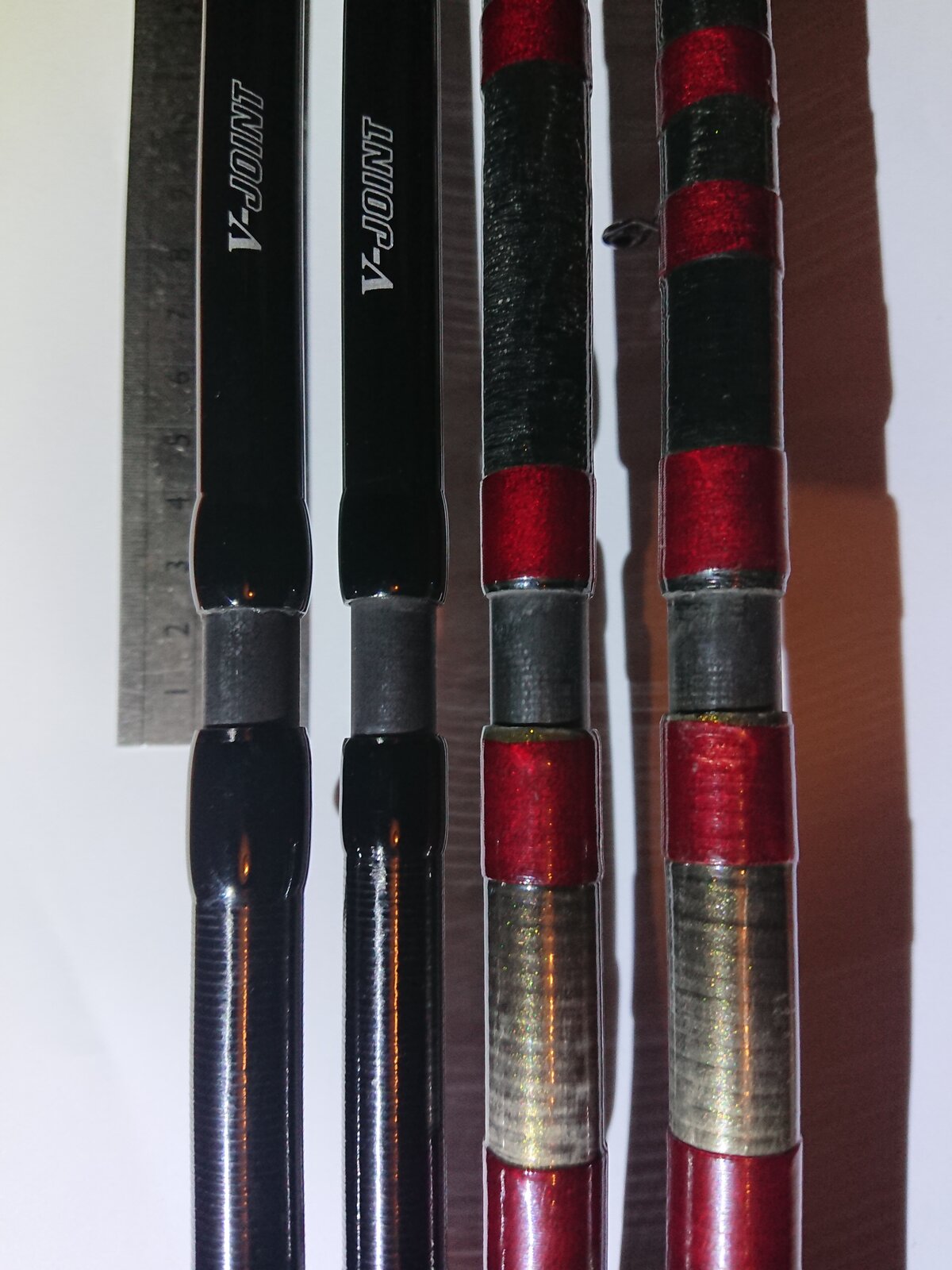 2) Section lengths. People tend to believe that rod sections should always be three equal lengths. This is often the case in rods with overslide joints (but not always). It often isn't the case with spigot joint rods. I've had new and undamaged rods where the sections are gradually shorter from butt (longest), to middle, to tip (shortest). I also have examples where the butt and middle are the same lengths and just the tip is shorter.

3) Ring spacing. In a similar vein to point 2, many expect to see rings get progressively closer as they near the tip but still relatively evenly spaced rings. However, the ring spacing, especially on spliced tip rods, can sometimes seem very odd. On some rods, the second ring seems strangely close to the tip ring even when the rod hasn't been unfortunately shortened. On hand built rods, I'd also suggest that there can be inconsistencies between rods and/or batches of rods. Spacings, ring types and whipping colours are not necessarily exactly the same through entire product runs.

The following are three 13' Daiwa rods from the same match rod range. From the top, Power Waggler, Waggler, Stick Float (spliced tip). None have been damaged, all original and all three sections are slightly different lengths. In this example, it's the Waggler variant that has the slightly odd spacing. 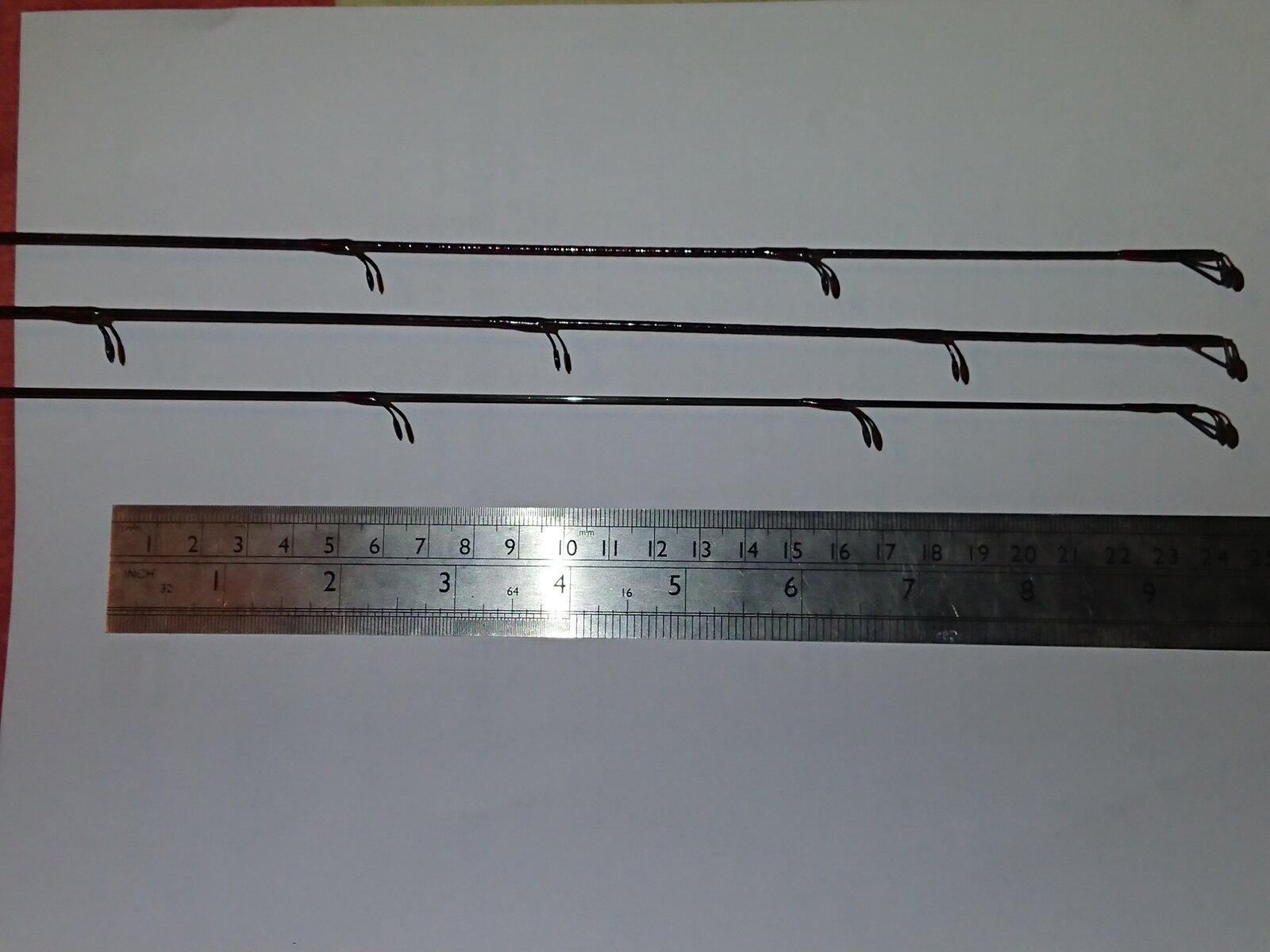 The following is two Daiwa rods from the same range. Stick Float (spliced tip) and Waggler. Again, both are undamaged and all original. It's also worth noting that the maroon whipping prevalent on both rods changes to black on the splice of the stick float rod. It remains maroon through the full length of the waggler rod. I suspect that most people would assume that the spliced tip rod (top) had been broken, I can assure you that this one hasn't ever been broken. 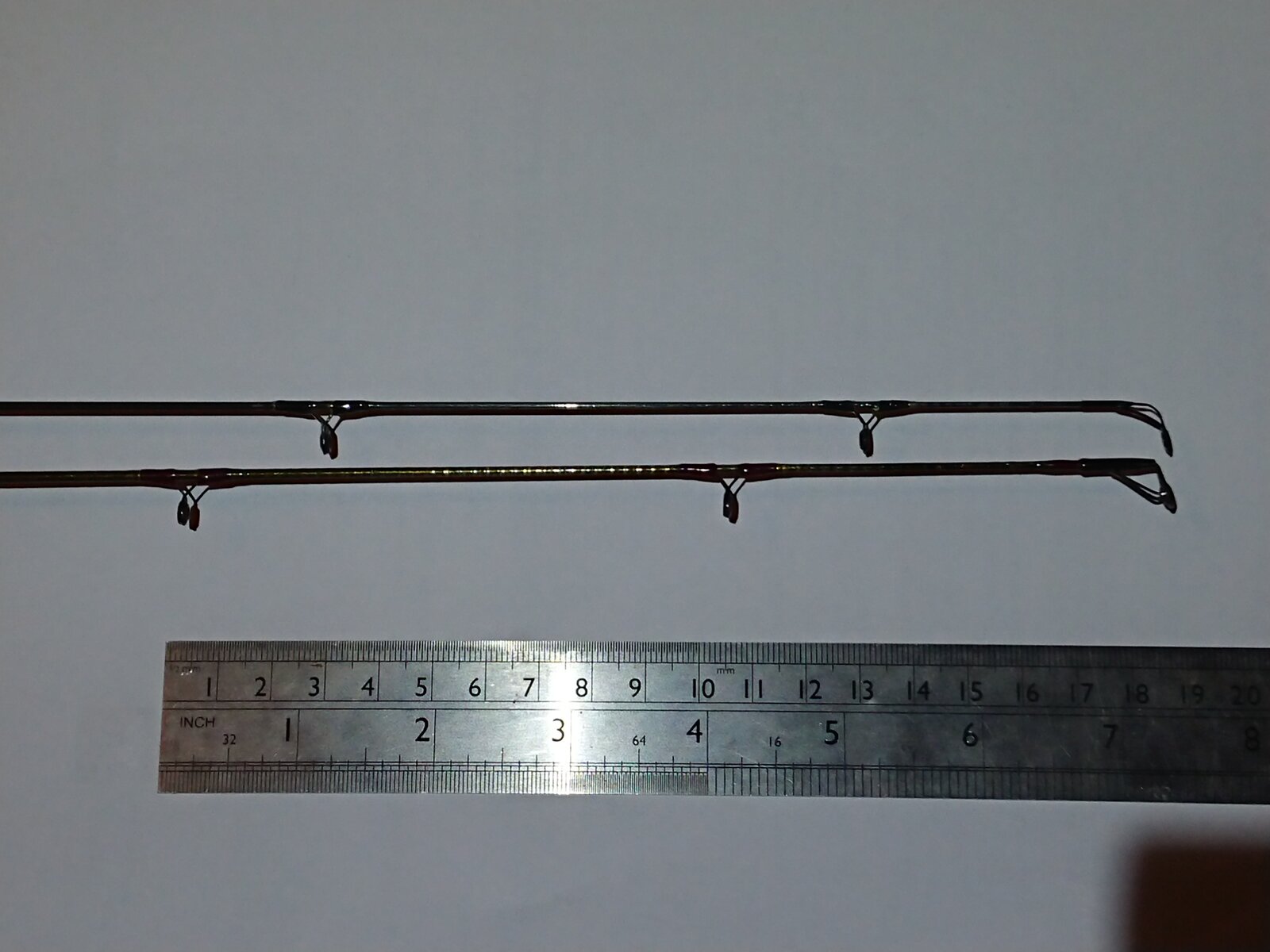 @Sam Vimes thanks sam really excellent knowledge and advise on what to look for and the differences that coccur on these rods, I can honestly say I'm much better armed when looking at these rods. If a 14ft spliced comes on the market I would be interested.

Fugley-fisher said:
If a 14ft spliced comes on the market I would be interested.
Click to expand...

I may be wrong, but I don't recall Daiwa ever doing a spliced tip rod over 13'. If you find one, it may be a modified 14'(+) rod. Keep your eyes on the rod product codes if you encounter one.
The only spliced to rods over 13' I've encountered have been Tri-Casts and Browning Spheres. However, it wouldn't surprise me if there were a long spliced tip Harrison or two kicking around. I've little doubt that there will have been the odd offering from brands I don't tend to keep a close eye on.

@Sam Vimes I've never seen a daiwa 14ft spliced, I may have seen a normark 14ft spliced, but I think your right the tri cast and browning are the ones. But I'll keep looking,

It would seem a spliced rod over 13 is a bit like hens teeth. But I'm happy with my rods for now unless one pops up.
T

Harrisons do a gti blank at 14 ft, some of the older rods tend to be tip heavy when you get into 14 ft plus.. Shimano zms is another.

Sam Vimes said:
Connoisseur G and Spectron M2 ranges came well after and both included a 13' spliced tip model. I don't know for sure but suspect that the Spectron M2 will have been the last spliced tip rod that Daiwa offered.
Click to expand...

In a nutshell, it would actually appear that it was the Connoisseur G range, rather than the Spectron M2 range, that included Daiwa's last spliced tip rod.

Chris, you are the very definition of the word nerd (and I mean that in a nice way). You never cease to amaze me.
T

A Conny G 13ft Spliced Tip was sold yesterday for a reasonable price on eBay: 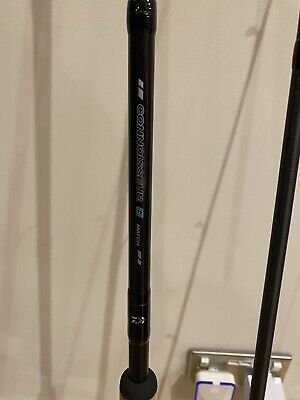 As title says, 13ft spliced tip daiwa connoisseur g spliced tip float rod. Daiwa Connoisseur G 13ft Spliced Tip - AS NEW. Fantastic rod for stick work, only reason for sale is that I rarely get a chance to use a stick float and seems a waste to keep a rod that will barely ever get used.
www.ebay.co.uk

Following on from shallow spool thread, DAM reels, any experience?

Any body know anything about this rod