Anyone fishing this weekend?

I was going big roach fishing but SWMBO decided that we should go to a child's birthday party and he's not even a blood relative Damn and blast !

Might nip out for a few hours tomorrow if the river’s fishable.

It's forecast showers for most of the day today. Considering going park, going on dirt peg to get brolly up.

chris1967 said:
Been sherwood forest fishery today ,on a roll won it with 89lb i'll post results up once they've posted them on facey book
caught on long pole hard pellet ,drew the shallowest peg 2ft at best on the lake and didnt fancy it
happy days
Click to expand...

Winter league round 3 (of 14) on Saturday, weather looks ok at the moment. 2 average results so far, need a good draw this time around

Match on Saturday, first outing in months , Willitoft nearish to Howden , il be very rusty but looking forward to a nice day out .

Zerkalo said:
It's forecast showers for most of the day today. Considering going park, going on dirt peg to get brolly up.
Click to expand...

Worth braving the heavy band of rain that came over in the end. Had one indication all day, a bite... for this 16lb 8oz fish in the heaviest of the rain. DIdn't manage to get my brolly up mind ground to hard, wind too windy... appalling conditions. Burt told me he knew I'd be the only one mad enough to fish in this weather, and my dad said I only caught the fish because it thought no one would be fishing in this. 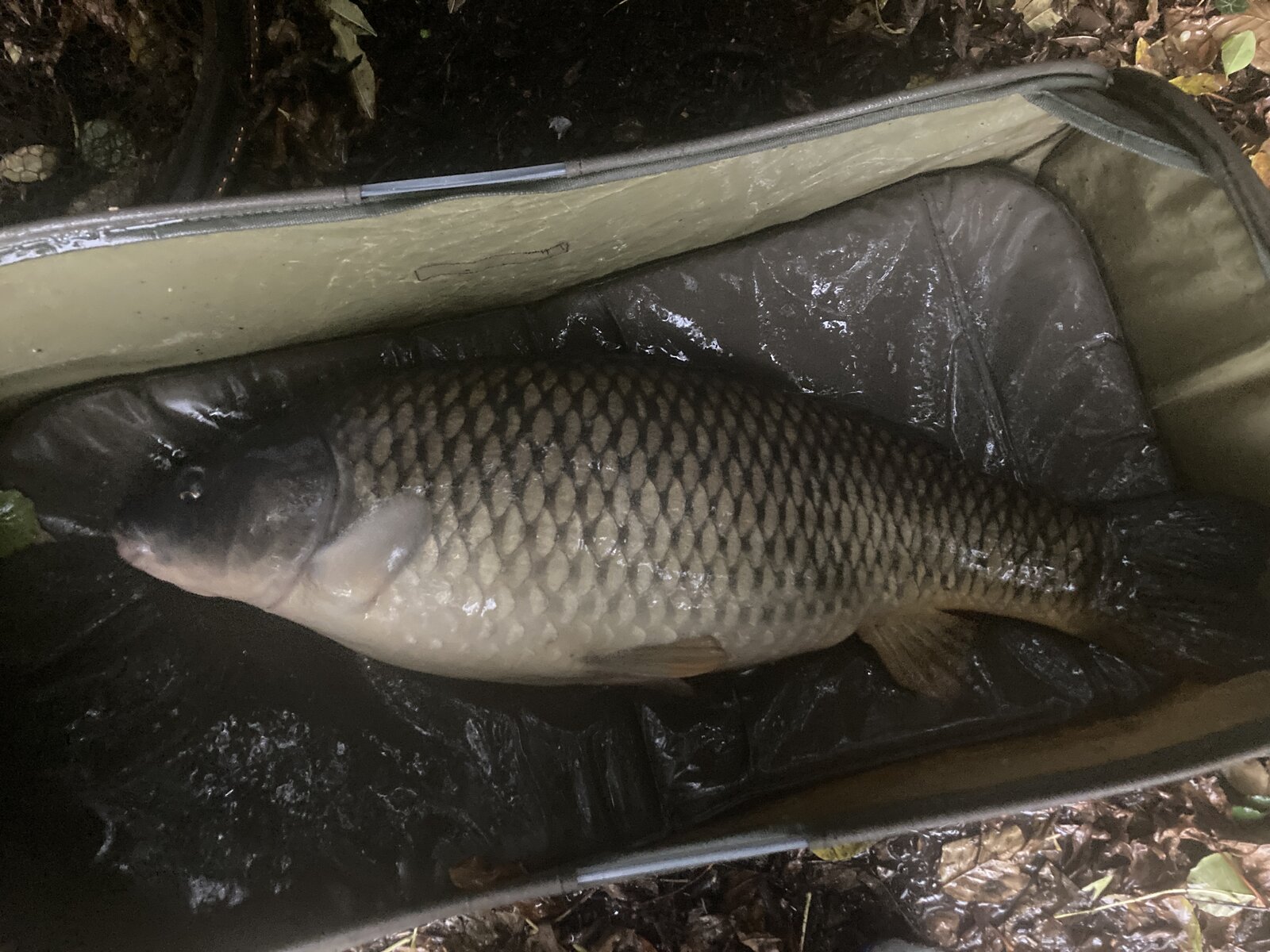 Me have a day off to chase the Barbel, hopefully I will catch up with one...

Zerkalo said:
Worth braving the heavy band of rain that came over in the end. Had one indication all day, a bite... for this 16lb 8oz fish in the heaviest of the rain. DIdn't manage to get my brolly up mind ground to hard, wind too windy... appalling conditions. Burt told me he knew I'd be the only one mad enough to fish in this weather, and my dad said I only caught the fish because it thought no one would be fishing in this.

The rivers are still high here and experience tells me I’ll be wasting my time trying to catch in them today. I do want to fish still so I’m thinking of getting some maggots and having a go at Ferryboat Farm. I’ve not fished there in ages and don’t know how it recovered from the last lot of floods, but it used to be decent.

Also checking my species list for the year and I’ve yet to catch a common or a ghost carp! Shows the type of fishing I’ve been doing lately. So yeah, I think I’m gonna go there and see if I can tick one of those off the list.

**Live decision making brought to you by tincatim**

only sunday this weekend for me ,got grand kids

Was in Oxford today and both the Thames and Cherwell are both tanking through and very brown which is so odd to see given they were completely normal level just a fortnight ago so will definitely play it safe and go on the canal on monday. Might attempt a short session on the Thames on Tuesday though as think it’ll have run off enough by then to at least be fishable.

I expected showers at the park today but the rain held off.

2nd cast I had a liner. Then 3rd, 4th, and 5th casts I had a Bream. Not the big ones in there which are around 5lb but around 3lb a piece. You can tell they're Bream, not only from the wimpy bites, but they rise up in the water as soon as hooked, a touch of a fight in them though, probably faster than Crucians when they try.

Someone had 7 of them off the dirt peg the other day, I was on the far right peg, other end of lake almost, but hoped I'd hit a bit of a shoal. Turns out I'd probably plundered them after these three. 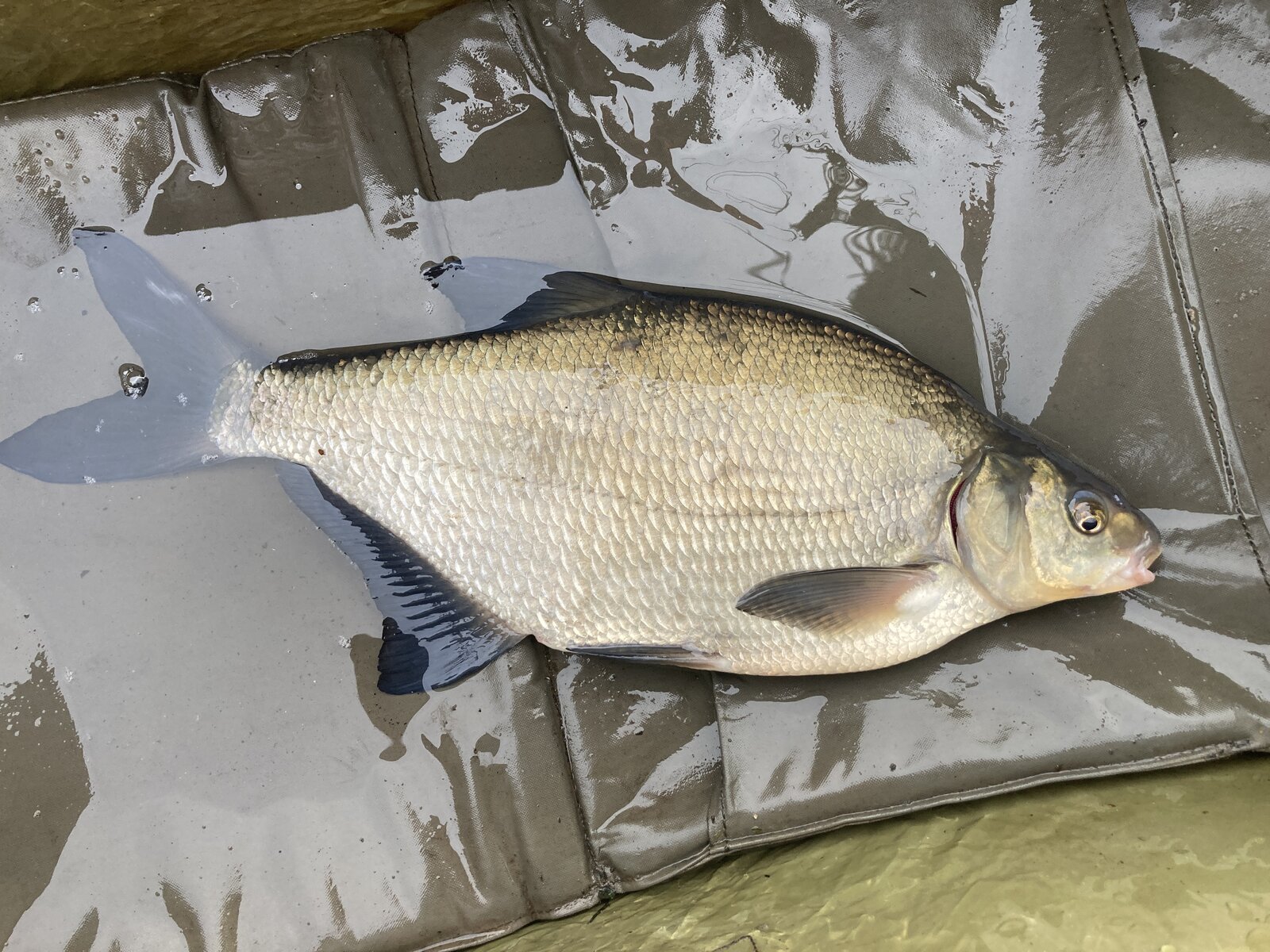 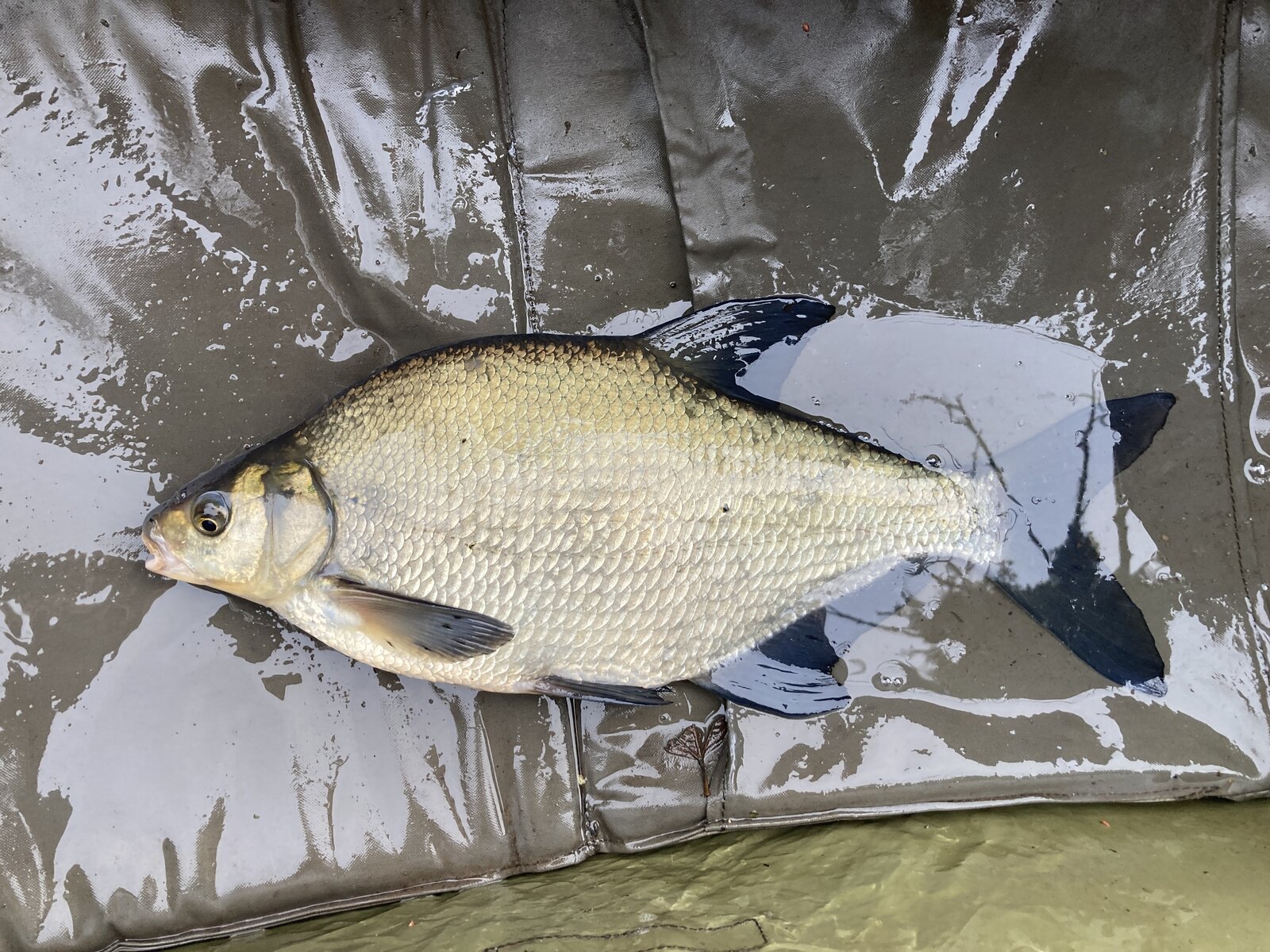 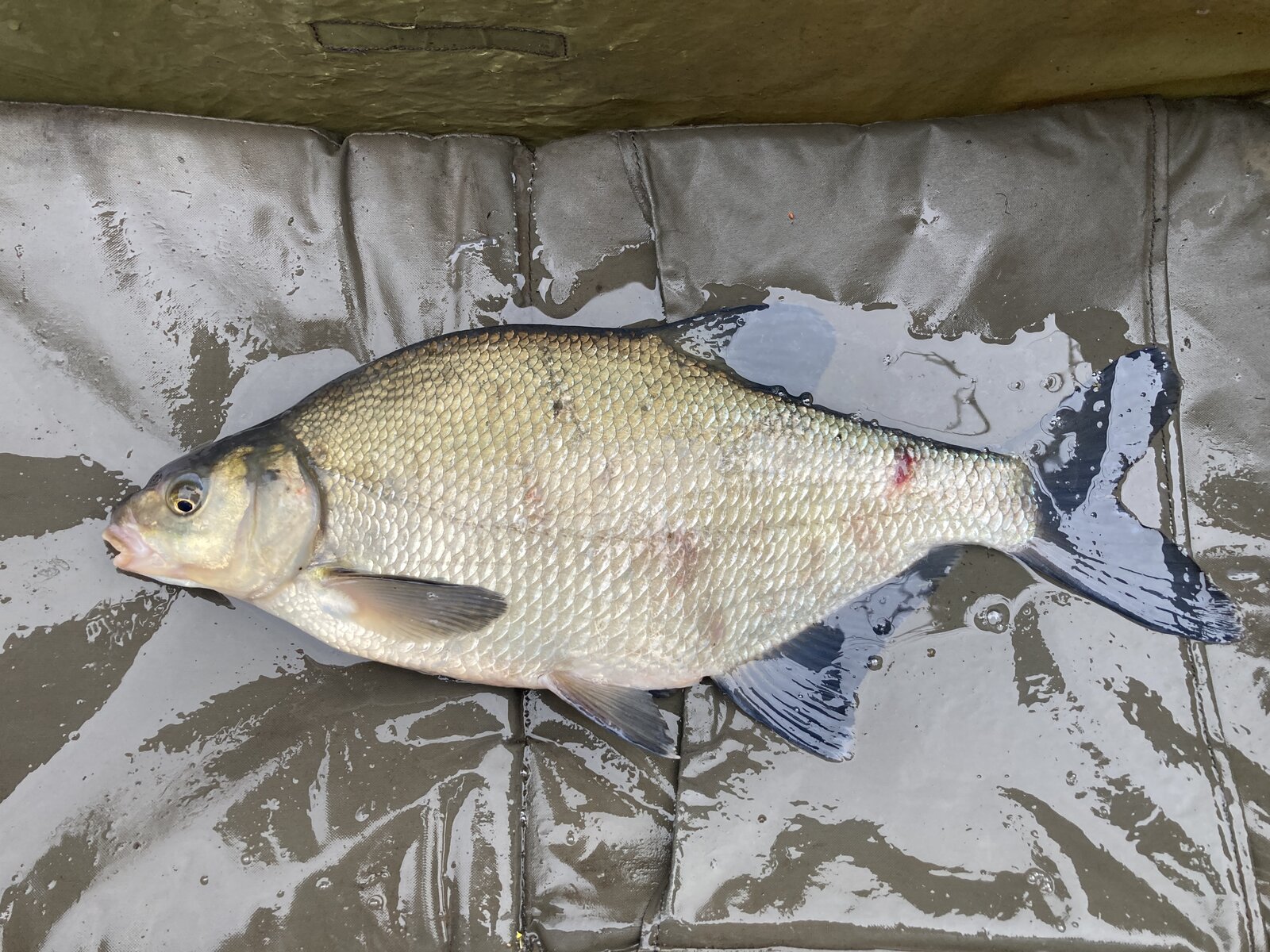 In spite of the nice overcast conditions, it was then a quiet day, leaving me hoping for a last minute usual Carp to save the day. At 3.30pm I had the slightest liner. That's enough to get the blood pumping for the next couple of casts when you're fishing for so few bites in a day. I made a roll up after the liner. That's my version of a timer, "Steve's Stopwatch" you could call it.

Nothing followed until last cast at 4.15pm, more potent liners this time. I almost brought the feeder in for one last cast thinking they might have moved it, but I left it in and the tip went round.

I thought it was going to be bigger as it was such a sluggish "I'm snagged mate" style fight, but it was this 11lb 10oz Common. 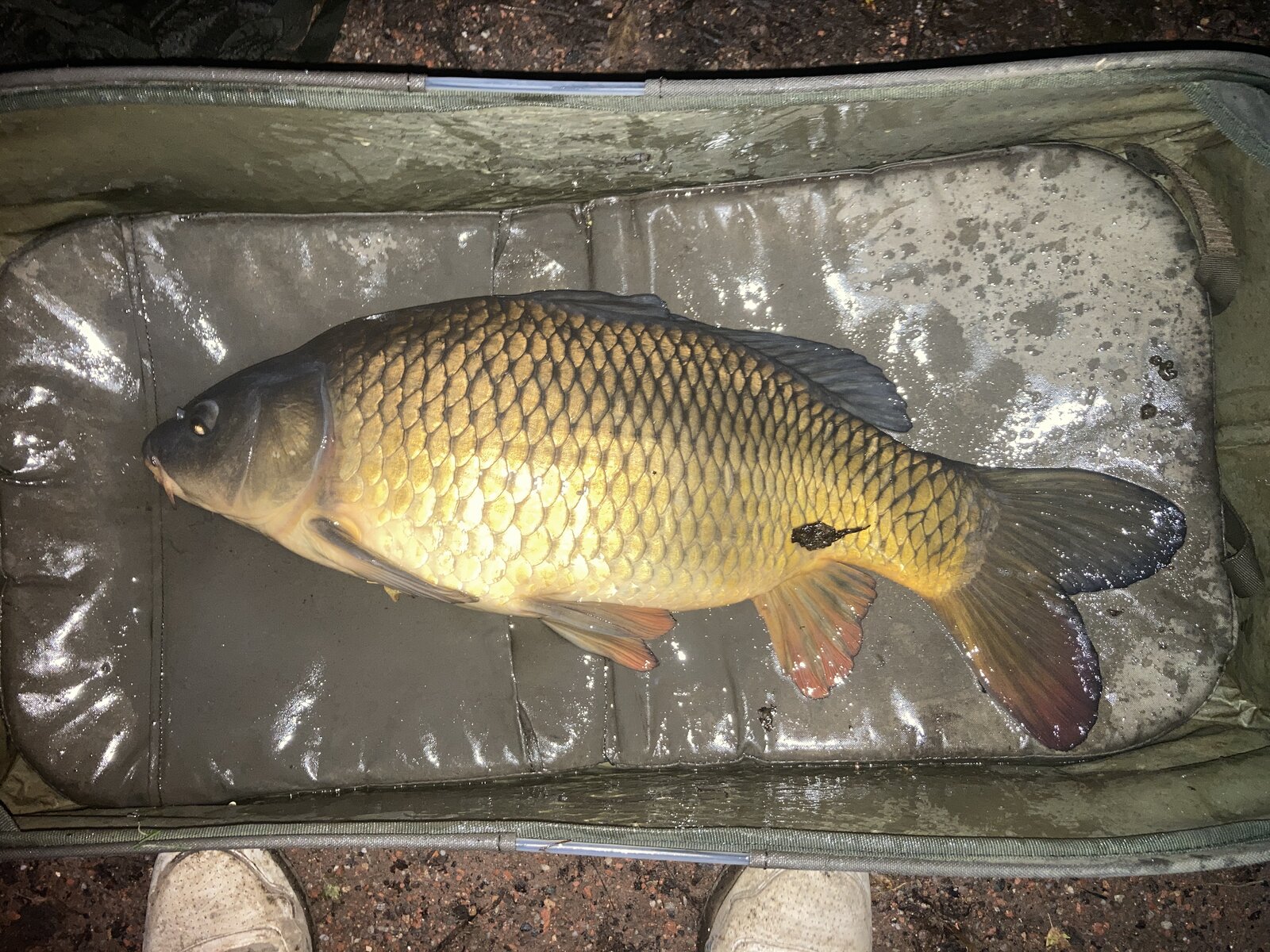 tincatim said:
Inspired by the latest Drennan video on Grayling, I’m heading into Sheffield tomorrow morning to catch me some pretty ladies

Just make sure that you don't catch anything off the pretty ladies of Sheffield.

RedhillPhil said:
Just make sure that you don't catch anything off the pretty ladies of Sheffield.
Click to expand...

I steer clear of Attercliffe, not my scene

Just been to a local pit for 1 hour, 15 minutes lure fishing. Such lovely conditions I had to go.

Never lure fished it before, I was hoping for a decent perch.

Kept moving because of the time constraints and kept alternating lures until I got a take.

Good fun for a quick outing, but no sign of the perch….

Gear was a 5-15 rod (a bit heavy), 20lb braid, wire trace (thank goodness) and a variety of lures (mepps aglia long, and a pink shad were the others).

Just been to scout out the canal for tomorrow looked lovely hardly any boats on the towpath side but loads on the far side for if down the track doesn’t produce and its obviously well coloured after all the rain but the bank is still quite grassy so shouldn’t be too treacherous. Today would have been a much better fishing day being dead still, mild and overcast but apart from being a bit cooler tomorrow it’s still not looking too bad so hopefully can get a few out. Not sure I’ve ever fished it in autumn as usually not pushed off the rivers by high water until winter so be interesting to see how it fishes this time of year.

fished a place called Spion kop today at warsop ,1st time i've seen the place
Had two at 13m fishing expanders over micros and missed a few bites and had another nine on straight lead pinging 6mils over the top
won it with 39lb ,happy days

Anyone fishing this weekend?
2

Where I'm going to fish tomorrow.

How many times a week do you go fishing?
2