So after a day off yesterday after Fridays maybe 50lb bag there I was back on my local commercial today with my grandad. It was an equally sunny day as it was then but was a fairly chilly and awkward breeze blowing across the lake. Despite it copping a lot of the wind we stuck with Fridays swim (was weirdly unbusy for a sunny weekend day) partly because it seemed better than last weekends swim but mostly because it gets enough sun to counteract the cooling of the wind. The water had cooled a little after 3 consecutive frosts which actually worked out well as the tiny rudd that had plagued us on the previous sessions were virtually non existent leaving the other species easily accessible so it turned out the best session on it yet.

Started fishing just before 9 and finished just before 4 and in that time I had 5 typical commercial carp and 5 small rudd but more importantly possibly as much as 70 respectable roach and certainly well over 20 mostly big skimmers for I’d guess maybe 40lb. The wind coming back and across did lead to more missed bites and fudged feeding and casting than on previous sessions but it’s cooling effect keeping the rudd at bay definitely counteracted that awkwardness by allowing the more proper fish to get to the bait.

Tackle wise over 95% of the fish were caught on the same set up as Friday of a 13ft drennan acolyte ultra float rod paired with a 2500 shimano sahara RD reel loaded with 3lb maxima to a 1g drennan loaded crystal insert waggler to a drennan silverfish size 18 to 2lb hook to nylon set up at roughly dead depth in a little over 5ft of water. The remaining fish were caught on a 13ft Cadence CR10 #1 that I had set up to switch if the carp got very active like Friday but as they didn’t I just went on it for the last maybe half hour after I got broke off on the main outfit with not enough time left to be worth using another hook length. That was paired with the same reel, same mainline and same float at the same depth but with a thicker wire size 18 to 2.5lb drennan silverfish hook to nylon. As the rudd were no bother today with proper fish replacing them I just stuck with single red maggot on the hook all day fished over loose feed of just red maggots over frenzied hemp groundbait.

Grandad didn’t fish particularly hard today as he couldn’t be bothered to fight the wind. But he still had a good bag of probably 50 odd roach, 10 skimmers, 2 carp and 2 rudd for I would think over 20lb. Most his fish were on single maggot as well as whilst he did try punch, caster and double maggot they just slowed the bites and didn’t change the stamp.

All in all despite the weather and overall bag weight not being as good as Friday it was a better session given it was dominated by respectable roach and big skimmers which are much more the sort of fish I prefer to catch over small rudd and carp plus it may have been the best catch from it numbers wise as well. Even the wind being awkward meant I had to fish with a bit more concentration and precision than I had the previous 3 sessions which did make the better bag more rewarding. Was definitely the best session of the new year so far. Back at work full time from tomorrow after a mix of full and part furlough since November so next session will be next weekend somewhere or other.

Few pics of the swim, I guess small, medium and large skimmers, a probably stampish roach and the first carp of the day which I guess probably ended up being stampish. 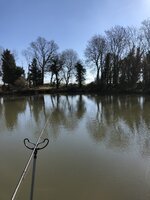 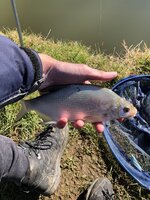 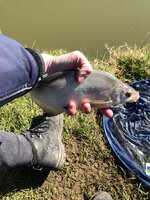 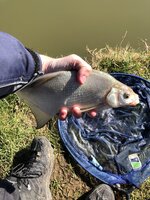 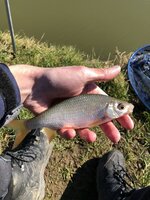 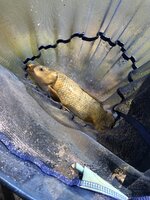