Another shot at Tench!

Not worth doing another thread to write up this mornings Roachy session with my dad so I'll write it here.

Was a bit cooler today, water temperature must have dropped a few degrees and it's either moved the fish around or the Tench just weren't feeding/ Getting my excuses in early but it's typical that when I go with my dad, hoping for him to have a few Tench, we don't really catch any.

Saying that, at 8.20am I had a Tench, probably the smallest one I've had out of there at about 2lb. 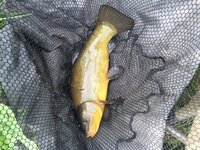 My dad said to me on the way back, he thought we might have been in for a good day when I had that early Tench but it just didn't happen.

We did catch a few Roach though. One of my dads got took by a Pike which he thought was pretty err... interesting.

Here's a few I caught. 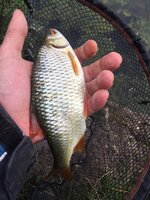 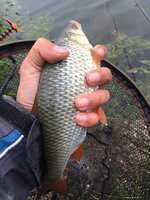 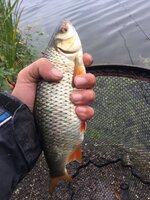 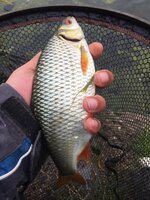 I probably had 25 in total, a few smaller than the ones pictured but generally a good stamp. Fish of the day though has to go to my dad who had this Roach. I didn't see it other than in the photo and asked him how big it was and he said, "at least a pound". 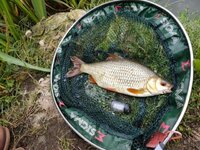 To me it looks at least a pound and half? Nice fish anyway! He had about 20, a mix of Roach and Perch. And he was pleased with that even if any Tench didn't show. I said to him, we'll have to go back on a warmer day, so here's hoping we get one soon.

Some lovely fish there again

That water has some cracking fish in it.

Back on the bank