So today I took the day off work again to have another Thames session in my favourite swim on the Sandford old channel after two great sessions doing so on the last couple Fridays. I very nearly changed my day off to Monday as was meant to be very bright today with a strong easterly so I thought a calmer, cloudier day on Monday would fish better especially after the rain forecast at the weekend. But I awoke today to the wind actually being a southerly so going upstream with quite a few clouds about so with the temperature in the mid 20s it was actually very similar conditions to the last couple sessions so I thought I’d give it a go. Unsurprisingly after 6 days of 30 degrees the river had dropped and slowed a bit more but it was still quite coloured so I was reasonably confident of another good session. It didn’t turn out quite as good as the last two sessions which I wasn’t surprised given how bath like the water was but it was indeed another good day.

Fished my usual hours of about 8.30 to about 3.30 and had I’d say about 55 roach plus 6 dace, 1 silver bream, 1 chublet and about 8 dace. Size wise the stamp of roach was pretty similar to the previous sessions although as I didn’t get any of the bigger ones this time the overall average size would have worked out marginally smaller. I’d say I had about 13lb of roach plus about 1lb from the other stuff. So whilst it was nowhere near the of the previous two sessions numbers or weights but still a good bag in my book. Obviously it wasn’t the roach all day pace of last week but it wasn’t really the busy morning slow afternoon of the week before either more just a steady pace all day. It certainly took a more faffing to keep them coming than the last couple sessions though. On those sessions I just fished two lines both in about 6ft of water about 6-7ft apart from each other and didn’t really have to tinker with the depths I was fishing once I’d got them going or switch around much tackle wise the first session mostly stick with a bit of waggler and the second almost all waggler. Today though I fished those two lines plus another mid river in deep water and another just off the rod tip and was frequently having to change between stick and waggler whilst also having to frequently alter the depth on the latter not just for the close line but also just generally across the other lines.

My grandad was with me again and started and ended his session with a bit of time on the stick but mostly fished the feeder as due to the reeds you really have to stand to trot these pegs which his back isn’t up to at the moment. He did say he’d have stuck at the trotting if I had been catching as well as I did last week but as it was slower he went with the the self preservation approach of the feeder. He ended up with probably tops a couple dozen fish mostly being roach with a few chublet but some of the feeder roach to corn were well over a pound.

So all in all another good session on what is an amazing bit of river that just keeps giving. To catch probably 60 odd, 80 odd and 50 odd roach in bags that with the over fish thrown in probably would have gone 18lb, 22lb and 14lb over a fortnight of not the most fishy weather in the world really does mark it out as a great bit of water for me. Whilst I sort of know what I’m doing I’m nowhere near good enough to be that consistent anywhere else unless conditions are pretty perfect so it just shows how good a spot it is. That said I don’t think I’ll take another day off to fish it again now until September. Partly to save holiday but also because 3 really good sessions in one place over a fortnight (suppose did have a few sessions elsewhere in between) is good enough for me so I’m ready for a change of scenery for next month. Probably back to medley but maybe also Northmoor. That next session will probably be a couple weeks away though as it looks rather wet this weekend and I’m away with mates next weekend. Might try sneak a little canal session in somewhere in between though.

Repetitive pics again this week for the regular reader as like I said last week these reports are for readers new and old! You won’t see this spot again for about 6 weeks though and I’ve at least thrown a little dace amongst the stampish roach this week for a hint of variety! 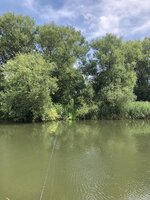 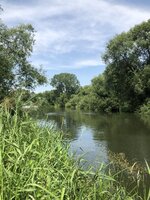 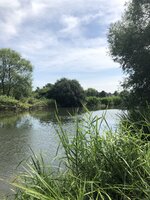 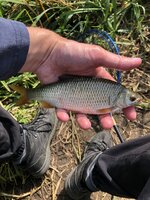 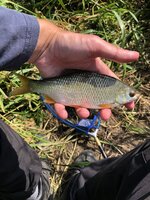 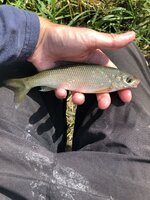 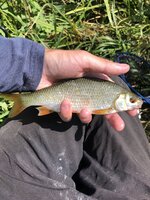 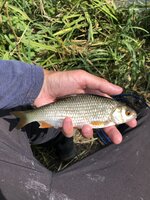 Silverfisher said:
about 55 roach plus 6 dace, 1 silver bream, 1 chublet and about 8 dace.
Click to expand...

Doh that’s obviously supposed to say 8 bleak not dace twice! Proper mind fart flipping bleak do that to me

I’ll add one of grandads bigger roach to make this a more worthwhile edit! 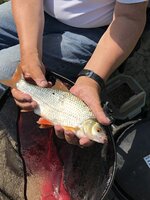