Following strong representations from the Angling Trust to both the Police and the Crown Prosecution Service in Cumbria, charges have now been dropped against pike angler Darren Reid who had wrongly been issued a Fixed Penalty Notice (FPN) on November 7th for travelling from his home in Barrow to fish at night on Lake Windermere.

At the time, the Coronavirus Regulations governing the second lockdown had placed no statutory restrictions on travel for outdoor recreation or exercise and it had already been confirmed by the Government that night fishing was permissible as these activities were not time limited.

The regulations contained a long list of exemptions including allowing people: “to visit a public outdoor space for the purposes of open air recreation”.

The government guidance at the time also stated that it was permissible to travel in order to: “to spend time or exercise outdoors”

Darren and his friend Iain Wright were returning to their vehicle with their tackle when they were challenged by three police officers – PC Lawson, PC Callon and PC Potts. Despite being appraised of the regulations and shown the guidance issued by both the Government and the Angling Trust, which make it clear that leaving one’s home for the purpose of outdoor recreation was permissible at the time, the officers insisted on issuing them with a FPN for ‘being outside the place where living in England without reasonable excuse’ under the Health Protection (Coronavirus Regulations) (England) (No4) Regulations 2020.

Iain opted to pay the FPN but Darren decided to challenge it and contacted the Angling Trust for support. Following a briefing from Angling Trust Policy Chief Martin Salter, Thompson’s Solicitors agreed to take up the case ahead of a hearing set for Friday May 28th. Having reviewed the evidence and considered the representations from the Angling Trust covering the lawful basis for Darren’s actions, the CPS decided to drop the case.

“Whilst we are delighted that commonsense has finally prevailed this is a case that should never have come anywhere near a court of law. During the November lockdown the public were being actively encouraged to participate in healthy and naturally socially distanced outdoor activities such as angling and it is concerning that neither the Cumbria police officers or the local prosecutors had actually read or understood the regulations they were supposed to be enforcing.”

“We made it crystal clear to both the Cumbria Police and the CPS that the Angling Trust was fully prepared to support our member Darren Reid in defence of both his actions and our own professional guidelines, which he had followed closely and which were produced in consultation with the relevant government departments and endorsed and promoted by both the Environment Agency and Sport England. The Angling Trust guidelines have been circulated to every police force in the country and we have had no challenge, criticism or problems throughout the entire period of the pandemic save for this situation in Cumbria. Hopefully, they now understand that angling is a safe and responsible activity that should be encouraged rather than criminalised.”

“I’m not one of these COVID rebels. I wear a mask when required, I encourage people to act responsibly and I made sure I checked the rules before I went fishing last November. As a full time carer for my disabled wife, it is easier for me to fish at night when she’s asleep and Lake Windermere is the local pike venue where I can fish for just the price of my rod licence. I realise the police have a difficult job to do but I was shocked at their ignorance of regulations and the fact that they were prepared to go after a couple of anglers fishing in complete isolation and posing no threat to anybody.” 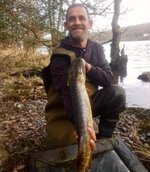 “I can’t praise the Angling Trust enough for their support and for being prepared to back up their guidelines with action. We are lucky to have such an effective and professional organisation steering our sport through these difficult times.

The Angling Trust will now be pressing Cumbria Police to cancel the FPN wrongly served on Iain Wright.

Over a quarter of all cases issued for alleged breaches of COVID regulations have been found flawed. This has prompted calls from MPs for an overhaul of procedures.

GO Outdoors and Fishing Republic give Angling Trust their backing

Get Fishing for Wellbeing | Angling Trust