Anglers have drawn up grand plans to revive Pontefract Park’s lake and relaunch it as an attractive destination for fishing once again.​ 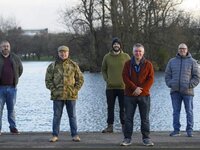 The group has big plans for the lake.

Pontefract Park Angling Club have been rallying to raise support to transform the lake’s fortunes after suffering years of neglect, vandalism and poaching.
Now hundreds have backed the idea by joining the campaign.
Member Dave Thompson, 31, who is part of a five-man committee taking the lead, explained: “The idea came about when old photos of past angling matches started circulating on Facebook, a few local anglers started reminiscing and saying how amazing it would be if the lake was brought back as an angling venue. 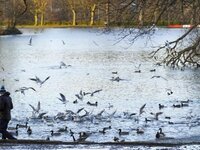 The lake was once popular with anglers.


“Since the old boathouse was taken down and with the council funding diminishing, the lake lost its management.
“It’s been subject to vandalism and poaching, the lake has started filling with silt which is bad for the ecosystem and is why we’re seeing more extreme algae blooms like we did this summer.”
The committee has already made a start, clearing around two tonnes of rubbish from the lake, pulling out everything from shopping trolleys, to road cones and old tyres, to litter and vegetation from the lake bed.
Dredging the lake of excess silt is still required, with plans to build a bailiff’s hut with toilet facilities and tackle storage. 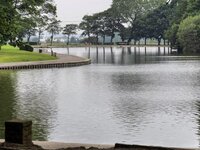 Interest is growing in the plans.

There are also hopes that angling coaching classes and taster sessions can be introduced.
The group wishes to invest in aquatic greenery, lily and reed beds to not only improve the aesthetics of the lake but to attract more wildlife to the park.
More flowers and shrubbery planted on the bank side, it is hoped, will also help prevent the amount of litter blowing from the park fields into the lake, which has become a huge problem in recent years.


All of these ideas will cost, particularly reducing silt levels, so the group has launched an online funding appeal.
Setting an initial target of £2,500, more than £1,100 has been pledged so far, but this has been earmarked for the club registration with the Angling Trust, which would be a major step forward.
But much more cash will be needed for the full plans to be turned into reality.
“There’s work to be done reducing silt which will not be cheap, this is essential work that needs to be carried out to ensure a fishable venue and safe and stable ecosystem,” added Mr Thompson, who lives in Pontefract.


“Obviously it has to go through all the right channels before it is agreed, but we’re hopeful we will get the go ahead which is why we have gone down the route of trying raise funds.
“We’ve not only asked the public to get involved but we are also researching grants available for us.
“When we met with the council they were nothing but cooperative and supportive. We all agreed this would be a great addition to the park for the Five Towns community.
“The local support has been fantastic since we’ve publicised our plans and we’ve seen nothing but positive support from the locals.


“Angling is massive at the moment, it was one of the first activities we were allowed to do after the first lockdown.”
At its peak, the lake was used by up to 100 anglers each weekend, competing in regular fishing matches.
Committee member Dave Thompson said that the decline began of the facilities started when the boats were taken off the lake and the existing hut was dismantled.
This left the lake unmanaged and unmanned.


He said that fishing started to decline when pole fishing became popular, but anglers found there was nowhere to buy day tickets and interest in the lake receded and it was left to deteriorate.
But he says every penny raised by the club will go towards the project and the subsequent upkeep of the park.
The not-for-profit venture already has the backing of hundreds of fishing fanatics, but the club is keen to involve all of those clubs and groups who use the lake at Pontefract Park.
Committee member Dave Thompson added: “The lake is well used by other groups, the model aircraft club uses the park, also model boat clubs sail on the lake. There’s also the Pontefract Park Run.


“We have absolutely no intentions of taking the lake off of these groups instead we want to work with these groups to help improve the lake for everyone to use.
“Although our expertise would be on the angling side, we want it to be a place for everyone to enjoy. It’s not just about fishing, we want to improve the aesthetics of the lake for the whole community.”
To donate click here.
Pontefract Park is the largest urban park in the Wakefield district.


It is owned and managed by Wakefield Council and Pontefract Park Race Company.
It was once more than 1,300 acres, but was divided after an Act of Parliament was obtained in 1780.
More than 336 acres were kept as public space, but that his been reduced further since.
During the First World War the park was used as an airfield for fighter planes to take down enemy Zepellin balloons.


The building of a new £20m leisure centre is expected to be completed at the park this year.

The original report can be found here: Ambitious plans to revive Pontefract Park lake as fishing destination
B

Good god that rings a massive time bell with me. That lake/pond was my first introduction to tench fishing, it was packed with them. The water was heavily weeded but clear. Not very deep, certain areas you could see the fish swimming about. A bunch of us spent an idyllic summer fishing that venue. We all lived in Leeds and traveled out by bus, for some reason the following year the fishing rapidly declined. So we stopped going, not certain who stocked the lake maybe the council. As I am now 73 so a rough guess it would be the summer of 1961, as we had only been fishing a couple of seasons with limited success to fish this lake was superb. We had bulging keepnets packed with tench and roach. After that I was hooked on tench fishing. The next step up for tench fishing was dringhouse lake at York, but that’s another story for another day.

I fished Dringhouse's a fair bit on my youth
B

Dave said:
I fished Dringhouse's a fair bit on my youth
Click to expand...

Did you have much success? I suspect we were fishing it at different times as I am a fair bit older than you. As you know it’s a very picturesque lake, the water is gin clear. I caught some decent size tench along with some quality roach. The free fishing lake next door was good for Rudd and pike.
Having returned to course fishing after fly fishing for years I was looking forward to returning to dringhouses, can get access. Looks like a private syndicate, can’t buy day tickets.

Used to fish it a fair bit when we lived at Badsworth. Plenty of small roach. Never got anything terribly big. Always seemed to tread in dog poo though. It was wick with it around there. And as it got dark you’d always end up with the local yocals asking if you’d caught anything before skimming stones across the pond.

. A nice idea and I wish them luck but, I won’t be going back. There’s far nicer places to fish these days that are a lot more peaceful. My days of hooking shopping trolleys are over.

Had some nice Tench out of there from the opposite bank to the railway line, against the houses back in the late 70's 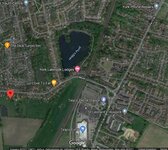 Used to cycle there from Leeds - them were the days

Like Backwoodsman I used to fish this regularly in my youth (late 50s/early 60s) It was absolutely solid with tench, it was a fish a chuck but I seem to remember there were so many of them that they were severely stunted and we rarely caught anything over a couple of pounds.

Dave said:
Had some nice Tench out of there from the opposite bank to the railway line, against the houses back in the late 70's

Used to cycle there from Leeds - them were the days
Click to expand...

What ? When you could cycle ?

It’s a great idea. It would need to be well bailiffed though imo. I remember when Corporation Park lake was opened for fishing in about ‘68 - it was rammed with perch, roach & goldfish! Suspect the goldfish were put in after the Fair had been every Easter. It lasted 2 years before most of the stock disappeared. There was a big Eastern European contingent in & around Blackburn even in those days.

It's a good idea and I hope it works out for them, but It will have to be managed well for it to succeed. I can see it being wrecked again by the local youths.