So when I got up this morning I had no intention of fishing as the trees were bent double outside and there was a threat of rain. But late morning I got a text from uncle saying he’d gone down the local commercial and got a swim out the wind so I thought I’d join him seeing as it’s less than 10 minutes down the road. Hadn’t fished there in about 8 years as it’s not really my cup of tea but it had been a couple months since I’ve caught anything so a bit of easy fishing was just what I needed really.

I fished from about 12.30 til about 4.30 (felt a bit weird as my sessions are usually between 8 ish and 3 ish) and in that time I had 6 fairly typical commercial sized carp, about 15 surprisingly big skimmers (all netters), about 20 just about respectable roach, about 25 very small rudd and a single small perch. The carp were of a stamp that they’d have bought possibly 20lb, the skimmers possibly 10lb with the rest bringing probably about 5lb so quite a good weight for only 4 hours or so I thought. Was indeed well out of the wind so quite mild and only got rained on couple times briefly and not too bad. My uncle had a similar mix of fish, probably slightly less than me whilst I was there but probably more overall seeing as he started a couple hours earlier. Was nice to fish with him again as he doesn’t do that much coarse fishing these days predators aside so it’s typically only time away sea fishing that we do together these days. Plus I had hardly seen him at all since October with all the lockdowns.

Tackle wise the usual acolytes stayed at home as I get a bit nervous using them on particularly carpy places so I went for the both cheaper and more powerful 13ft Cadence CR10 #1 paired with the drennan 7 series 300 reel loaded with 3lb maxima to 1g drennan loaded crystal insert waggler to a size 18 to 2.5lb drennan silverfish hook to nylon fished in about 4ft of water. Hook bait was a single red maggot over loose feed of red maggots and a groundbait of which I have no idea what it was as my uncle brought it but was hempy and smelled quite sweet.

All in all it was very nice to get out and finally catch some fish and actually quite nostalgic to fish a place I hadn’t been in so long. Must say it has improved since I last fished there in terms of more diversity of fish and generally a bit more matured. Might take my grandad there tomorrow to get his fishing year underway as well weather permitting.

Few pics of the swim, one of the smaller skimmers, one of the bigger skimmers and the first carp of the day which ended up as probably about one of the mid sized ones. 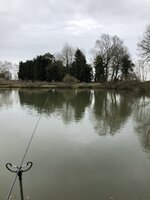 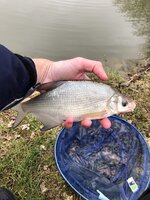 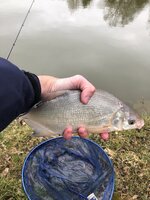 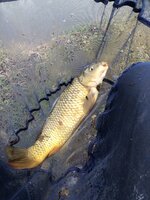 Sounds like an enjoyable mixed bag, look forward to your report from today too.

Sounds like a decent afternoon and nice mixture of species too.

Which commercial was it ?

Yeah was a nice mixed day with the big skimmers a lovely surprise, bit different today for which the report will follow.

Not actually sure what the place is called, definitely something farm, but not sure what. It’s basically in fritwell though.