A tale of ten casts

On Saturday afternoon a small window of opportunity (break from the wind/rain) presented itself for a few casts and to get away from decorating! 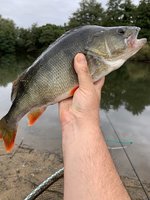 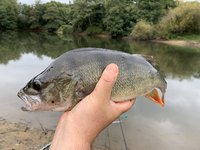 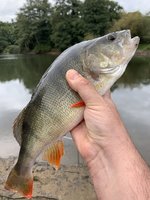 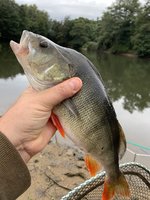 Now you cannot grumble with them four in less than half an hour can you?
I can as I messed up big style to end what could have been a crazy hour.
A rain storm approached and up went brolley - next five casts resulted in shy float dipping up and down slowly missed bites.
Normally this would indicate small Perch chewing on the prawn or small Eels doing the same.
Also bear in mind big Perch sulk and send off warnings to other Perch once caught and released.

Getting to last cast but let me digress. ?

Set up was a Map 13ft specimen match rod, drennan red range reel, 7lb mainline, 5lb hooklength, size ten hook, 5aaa insert waggler set up slider style with two no5 droppers.
Fishing prawns this set up suits and most fishing done c!ose in to deep water.
Over the course of the season a foot off line off here and there or several times upto 15 ft off where slider knot has dug in and kinked.
On Saturday I was on a shallow bank casting around five to six rods lenghts out.

Last cast: Just before a break in the rain the float dipped, not a sail away but could see tip just under the water.
Something on but not tearing away like the others. More pressure put on, rod in nice curve.
It woke up and went for a long steady swim.
Clutch ticking away - not screaming, just a steady tick.
As it kept going, to my horror I watch my line/spool attachment knot appear as more and more line was given.
As the last loops were about to be taken I jammed my finger on spool as I did not want any pressure on that knot.
Spooled out the fish did not stop, the rod bent and could not go further, no line to give and at full stretch.
The hooklength (spade hook) parted at the hook.
Its my fault as not even thought about how much line left on spool (which is shallow).
I think I hooked a very very large Eel by the way it just sauntered off at a steady pace.
Ironically would normally fish straight through when in normal spots close to snags but put hooklength on as in open water.

Reel stripped and respooled last night with 6lb sensas, slider set up all put back on ready for next window of opportunity.?

What a nice perch catch
M

Great session rudd and what a start with those perch, unlucky at the end though.
T

Some nice perch there, well done...

Nice perch those for sure!

markymark123 said:
Great session rudd and what a start with those perch, unlucky at the end
Click to expand...

My own fault for laziness ?
M

rudd said:
My own fault for laziness ?
Click to expand...

I'm sure we've all been guilty of it at one time or another.

The Perch in that water are very aggressive and attack anything and each other but are particular to a prawn.
Biggest recorded is 3lb 1oz but there has been sightings of an estimated 3 1/2 ish.