So today I committed a bit of a sin and fished a Stillwater in the first half of the closed season which I don’t tend to do simply because the second half of the season is usually a washout with floods so I like to fish rivers every chance I can. The plan when I awoke was very much to fish the Thames with my grandad but I got a text first thing from my uncle saying he was at Marlborough Pool so seeing as the Thames is currently in its usual first fortnight slumber we thought we’d save it for next weekend when it should have woken up and joined him instead. I had a right struggle on my first session there last month and thought it would be next closed season before I’d get another crack at it so was happy to take a one off detour from the river to give it another go. It had fished better for my uncle and grandad on sessions they’ve had on it since so I was optimistic. Was a decent choice in the end as it certainly wasn’t hard today but instead was stacked with fish!

Started fishing a little after 8 and after instant mini Rudd grief on anything alive I switched to seeds and from then on until packing up a little after 4 it was just roach after roach. Was so many it was hard to keep up with how many I was having but reckon it must have been a couple dozen an hour so across the 8 hours I’d have had certainly well over 150 fish probably pushing 200. Tbh it was a bit too manic! Surprisingly there was none of the real good ones you tend to get with hemp but that stamp was fairly decent so the sheer number of them must have bought over 40lb but how much over is anyone’s guess as was hard to track the numbers given there was so many. Although I’ve caught many better roach bags in terms of good numbers of better stamp fish I’ve certainly never caught that many for that big a weight so was certainly a day to remember. Especially given it’s almost a natural water given it’s been there hundreds of years and the roach (along with the perch and I think bream) weren’t to my knowledge stocked. I would have preferred a bit of a smaller weight of bigger sized ones trotting a river but I’m never going to complain about a big bag of decent roach so was a lovely session that justified the detour from the river.

Tackle was the 13ft drennan acolyte ultra float rod paired with the 2500 shimano sahara RD reel loaded with 3lb maxima to a 1.5g drennan loaded crystal insert waggler to a size 18 to 2lb drennan silverfish hook to nylon. This was set up to fish on the drop to dead depth in about 4ft of water. About 10% of the fish fell to either red maggot, caster or worm but they were largely mini Rudd magnets so about half the fish fell to hemp with the rest probably just about mostly tares then the rest again on black fjuka micros. Was surprising not much difference in preference between those last 3 or much difference in stamp although hemp was probably just about the most effective hence why I used it more. Loose feed was mostly hemp with a few tares and the odd few casters over an initial few balls of frenzied hemp groundbait. Not getting any big ones is certainly unusual for seed baits so makes me wonder if they are even in there but maybe just couldn’t get a look in given the hordes of the rest of them.

My uncle fished worm on a heavier float set up for the tench and although he got a lot of grief from the mini Rudd doing that he did get a few roach, a perch, a 6.5lb bream and a couple tench that were either side of 5lb. Not as many tench and bream as he got last time out there but not bad. My grandad targeted the bream at range on the feeder which was disaster really. He had two skimmers and a few small Rudd, Perch and Roach but that was it as the Rudd were just hammering his worms.

All in all not what I had planned this morning but a good session (if a little too manic at times!) that’s for sure. Was a nice day weather wise as well as we were sheltered from the chilly breeze by trees and reeds and an early shower didn’t last long and it was quite warm when the sun came out. Will be back on the Thames next weekend as going off the years gone by it should have got out of its usual first fortnight slump and started fishing well by then. A big match on it tomorrow should give some clues to that as well. Might have a quick go on canal tomorrow but looks a rather windy forecast so will see how it looks if I’ve got some time free.

Didn’t take many pics today as my phone was low on charge from the start so had to preserve it. Therefore just a swim pic and a roughly stamp roach. 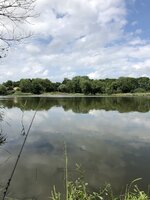 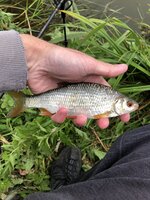 Yes is a stunning lake that’s for sure. Unfortunately not very peaceful though as behind that tree line is a very busy road!

Silverfisher said:
So today I committed a bit of a sin and fished a Stillwater in the first half of the closed season
Click to expand...

Looks like this place is a proper gem!
This under serious consideration for my locations next year. Have you fished any of the rivers on the book?

Looks like this place is a proper gem!
This under serious consideration for my locations next year. Have you fished any of the rivers on the book?
Click to expand...

Haul is definitely the right word there were just tons of roach! Between me, my uncle and grandad we’ve got over 120 years fishing experience between us and none of us had seen that many roach come out of as good as a natural venue before. Would have liked a few less of them with them instead being a bit bigger but they weren’t too bad a size so still good fun especially on the seed!

I’ve fished their bit of the river at sandford a couple times but only in late autumn and early winter when it’s had extra water on so it’s been a bit tough but still ok. But it’s literally opposite to littlemore’s sandford meadows which is one of the best stretches around here so there’s no reason their bit shouldn’t be just as good in the summer and early autumn. Planning to spend July on medley and Sandford weir/old channel but going to try their bit of sandford again by august latest. Have also fished their bit at bablock hythe as well which can be very good but tbh the Northmoor stretch next door on the littlemore ticket is just as good and a nicer bit of river. I haven’t fished their other bits though as compared to the littlemore/odaa stretches they are a sod to get to. The bit behind Marlborough pool for example is stunning with some cracking fish by all accounts but is one hell of a trek with some serious gardening required when you get there. They could cut the walk in half if they just spoke to the farmer though.