Well today was just one of those days fishing that are so good that you’ll never forget them. I’d decided to take the day off work to fish the Thames on the sandford old channel again after a successful roach session doing so last Friday. I thought it would be harder today as it was borderline hot, very bright and the wind was all over the place sometimes upstream sometimes downstream sometimes non existent. But on arrival in my favourite swim (which was luckily free again) the river was whilst a couple inches lower and a bit slower than last week still well coloured which negated the sun so I was pretty confident that if I could get my tactics right I could emulate last Fridays catch. What I didn’t expect was to comfortably eclipse it and have one of my best ever sessions but that’s what happened!

I started fishing at about 8.30 on the stick and had a few roach from the off but it was difficult to control in the all over the place breeze. The roach were already coming up in the water so given the flow was a touch slower than last week I knew the waggler could do well so I switched onto that at 9 and stuck with it until packing up at 3.30 and it was roach galore, especially in the morning but even the afternoon was pretty constant. I’d say through the first half of the session I was averaging a good 15 roach an hour and even in the second half it was probably 10 an hour so in total I’d have had comfortably over 80 roach. Size wise they ranged from barely over 1oz to comfortably over 10oz with the average working out at certainly over 4oz so I’d have had easily over 20lb of roach alone alongside about 20 other fish made up of a pretty even mix of small dace, silver bream, chublet and bleak that probably took me up to at least 22lb overall maybe a little more. So a great haul in my book in fact one of my best river catches ever!

My grandad was with me again but had to feeder fish again due to a new found obsession of knackering himself in the garden! He fished double corn in an attempt to find some big roach which failed miserably in the morning when he only had a few chublet and bleak when having quick looks on maggot. But in the afternoon he did have a few roach. Probably only about 10 but they were crackers with the best going well over a pound. He was a bit annoyed he couldn’t trot today though as think he was a bit jealous of the great sport I was having!

All in all it really was a superb days fishing definitely one of the best I’ve ever had certainly river wise. I had a similar number of roach for probably a similar weight on medley last September but a few of those fish were on maggot so getting all of them today on seed baits was better in my eyes. I might have caught better weights from medley on the feeder before when proper bream and perch have played ball and have certainly caught more fish at Clifton when having to put up with bleak but for a combination of numbers and weight of quality fish I’m not sure I’ve ever had a better session on the river than today. Was just a great day on an incredible bit of river that just seems to be full of quality roach!

Next session will be a short one tomorrow morning before a garden party with some friends in the afternoon. Quite where will depend on how I pull up in the morning really. If fairly fresh I’m going to be back on the Thames maybe on sandford meadows. But if as I suspect I’m a bit weary I’ll go on the canal as it involve less than half the drive, less than half the walk and doesnt require standing to trot so less than half the effort!

Pics today are a bit repetitive of last week given I was in the same spot fishing for the same species but I do my reports for new readers and regular readers alike so it’s the swim, the view upstream, the view downstream and a selection of roach. 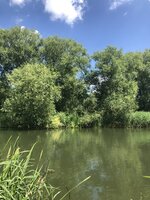 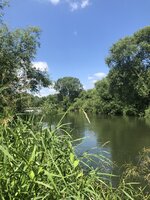 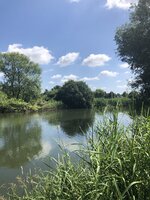 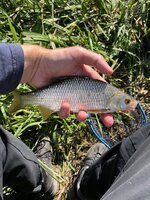 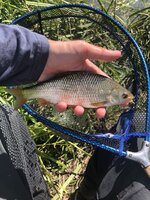 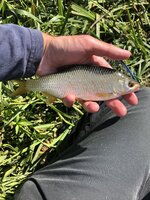 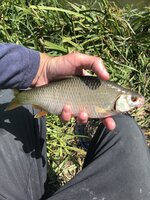 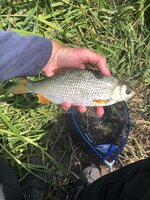 Great report, nice pics. I'm envious that you've been able to fish a river on a summers day without the intrusion of swimmers, paddleboarders etc.

DFL said:
Great report, nice pics. I'm envious that you've been able to fish a river on a summers day without the intrusion of swimmers, paddleboarders etc
Click to expand...

And yes as great as the fishing is on this stretch it’s equally great that it’s essentially boat, swimmer and walker free. Literally only saw the bailiff and a couple kayaks today. That peace and quiet is probably part of the reason that the fishing is so good although I think the fact it holds its colour and flow more than most other stretches really helps as well.

It really was great I couldn’t believe it the roach just never stopped coming! And yes is a stunning swim just a lovely place to be the fact it fishes really well is just the cherry on top. Think I’ll take one more day off this month to fish it again before I spend a bit of time elsewhere. Can’t be burning any more holiday beyond that ! Definitely going to have a go on it come September time as well though.

Silverfisher said:
That peace and quiet is probably part of the reason that the fishing is so good
Click to expand...

Well actually slight addendum to the peace and quiet point the weir was anything but quiet today was louder than last week given the rivers dropped a little and the mostly downstream wind carried the noise our way. I find it bearable as can zone it out plus I don’t find it an unpleasant noise anyway but poor grandad with his hearing aids apparently couldn’t hear much else

Sounds like your part of Thames is fishing really well this year. My club has got a similar stretch below Windsor below a weir with very few boats, I haven't been there myself as the drive is a bit of a pain its been fishing OK but not as well as your stretch.

alsur said:
Sounds like your part of Thames is fishing really well this year. My club has got a similar stretch below Windsor below a weir with very few boats, I haven't been there myself as the drive is a bit of a pain its been fishing OK but not as well as your stretch.
Click to expand...

Yes it’s fished very well last couple of weeks particular around sandford. I think its because the wet June has put more colour in the water than usual for this time of year. Then the old channel always holds a bit more colour than the rest of the stretches which is why it’s usually the best bet this time of year.

Went down there again this morning on a different peg for a few hours and whilst it wasn’t as good as yesterday it aaa still decent. Might just have time to do a report before I’m going out.
D

Nice to see it's fishing so well even in this heat!

downtheriver said:
Nice to see it's fishing so well even in this heat!
Click to expand...

Yes I think it’s the decent flow and colour in that stretch that helps it fish well. Mind you it didn’t get too hot on Friday it reached about 27 and there was the odd cloud about. I think the 30 degrees and cloudless skies of the last couple days might have tempered the sport somewhat though!

Still can’t believe how good it was, very enjoyable indeed!

Just counting the days til the next session now!
A

Silverfisher said:
It was indeed mate just one of those days where it all goes right

Just counting the days til the next session now!
Click to expand...

if its Friday, let me know and I'll join you.

adriang said:
if its Friday, let me know and I'll join you.
Click to expand...