So after a brilliant comfortably over 20lb roach bag in my favourite swim on the sandford old channel yesterday I just had to get back down there this morning before social commitments this afternoon. I’m fairly sure that swim would have been taken today as was quite a few cars in the car park so I didn’t walk that far up to check and instead dropped into my second favourite swim that whilst not as consistent as the other swim still produced a couple comfortable double figure bags last year. The other swim definitely holds more fish probably because it’s got more flow and colour than today’s one which is deeper so slower and slightly clearer and crucially in this weather the other swim has enough big trees to partially shade the water at least through the morning whereas today’s one takes the full brunt of the sun until we’ll into three afternoon. The weather had also gone from borderline hot yesterday to properly hot today with not a cloud in the sky after a few little fluffy ones brought brief spells of relief yesterday. Therefore I was unlikely to catch as well as yesterday today but with still enough colour in the water I was confident that I’d do ok especially as I was only slightly downstream of yesterdays very successful spot and I did indeed do ok.

I started fishing about 8.20 on the stick and after getting bleaked on caster and only picking up a single roach on hemp I changed over to the waggler at 8.30 until packing up at 11.20. That improved the sport not to anything like the extent of yesterday’s session but to a decent level. I ended up with about 25 roach, a dace, a silver bream, a chublet and a handful of bleak. I didn’t get any of the good sized roach that I’d had yesterday but didn’t get any blades either so the average size was whilst a fair bit smaller than yesterday still probably not too bad so I’d say with the other fish thrown in I’d have had about 6lb. So if I’d fished a full 7 hour session like usual then allowing for probably a bit of a drop off in catch rate in the afternoon as usually happens I reckon I would have got maybe around 11lb. Obviously that would be only about half the weight (and probably half the number of fish) of the I’d say at least 22lb bag yesterday but given I was in a slightly lesser swim in even less ideal conditions I think that would have been a decent result so was an enjoyable morning. Pretty sure I could have caught a little more if I had more bait to pull them up in the water like yesterday but I had to feeler sparingly as I only had a little bit of leftover bait from yesterday so they stayed pretty deep so weren’t competing as much. But never mind was still fun!

Tackle wise no point going through that stick set up given it was only used for 10 minutes but the waggler set up was the same as yesterday in the form of the 13ft drennan acolyte ultra float rod paired with a 2500 shimano sahara RD reel loaded with 3lb maxima to a 1.5G drennan loaded crystal insert waggler to a size 18 to 2lb drennan silverfish hook to nylon. Again set up to fish on the drop but in this swim down to a couple inches off bottom in almost 7ft of water. Most successful hookbait again was hemp but did have a couple fish on tares and the early bleak and chublet on caster. Loose feed was mostly hemp with a few tares fished over frenzied hemp groundbait.

All in all whilst nothing likes yesterdays truly unforgettable session it was still a decent few hours fishing so I’m glad I went as I nearly didn’t given I was a bit tired after yesterday and didn’t have much time to fish today. It’s certainly been a good couple days of fishing that I didn’t expect in this weather which just shows how good a stretch of river the old channel is. Next session will be back end of the week when I plan to take one more day off to have a last go in that favourite swim to see if I can make it 3 from 3 this season in terms of bumper roach bags from it!

Unfortunately the swim pic today is a recycled one from a session in it last year as the bailiff appeared literally as I was about to take a picture then I forgot all about it! Think it’s a fairly good representation of today’s conditions still. The selection of roach were from today though! 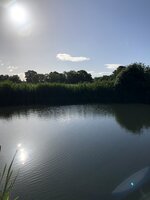 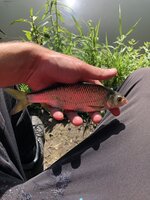 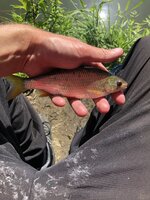 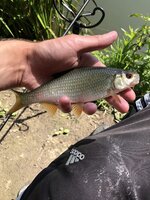 Brilliant report and lovely pics but, can we have less groin shots ?

tipitinmick said:
Brilliant report and lovely pics but, can we have less groin shots ?

Particularly bad groin pics today with all that slime as well looks rather questionable!

Particularly bad groin pics today with all that slime as well looks rather questionable!
Click to expand...

. The thought did cross my mind that maybe you’d got bored of the fishing and ….. errrrrr ….. you’d got other things on your mind.

. The thought did cross my mind that maybe you’d got bored of the fishing and ….. errrrrr ….. you’d got other things on your mind.

Well it is a secluded spot!

It won't be now you've told him that lol

SeanB said:
It won't be now you've told him that lol
Click to expand...

tipitinmick said:
Brilliant report and lovely pics but, can we have less groin shots ?

chefster said:
Looks like he’s been tugging one off over his 3 oz roach

His 6 oz roach trousers are drying in the background out of shot!

You should have seen the state of the pair I wore down the canal Wednesday night when the skimmers turned up! Looked like I’d walked off the set of an adult movie

Bream slime is just nasty stuff. Weirdly the silver bream aren’t slimey at all though

Or "balling in it in"

SeanB said:
Bet you won't be too busy to take photos then will you

Particularly bad groin pics today with all that slime as well looks rather questionable!
Click to expand...