Adventures; really it's just been a few trips out to my local haunts. Am still fishing even though I took a bit of a forum break so sorry for the rambling long post.

Like most of us that brave the cold weather, I need somewhere I can still catch fish in winter.

With all the rain we've been having, the rivers have been out of the question most of the time.

After we had a brief dry but cold spell a couple of weeks back I decided to try the weir pool on the Stour near my house. The levels had receded enough for me to try the usual method of chucking a maggot feeder with a size 12 hook and either dendros or a bunch of maggots on the hook for the chub. After an hour of casting I'd lost about 6 hooks to snags! All the rain has washed a ton of debris into there. Result... Total snag pit!

I'm really wanting to try a Chubber float with some big baits there. Before I was thinking there's not enough of a glide to be able to float fish it but it turns out you can stand to the side of weir giving you a run to trot facing away from you, directly downstream. I love using Chubber floats so that's something to try when the levels are reasonable again.

I also tried the Staffs/Worcs canal a couple of times. The first time was before the first major frosts and I managed to winkle out a good 8lb bag of roach, mostly Perch (including one about 1.5lb) and a 2.5lb Chub. My first Chub from a canal! I was fishing big maggot on a 3m whip down the inside and about a pole 3/4 of the way across, just down the far shelf, which is where the Chub came from. Was really chuffed with that. Only a no4 elastic (which shot out on the Chub, leaving me chasing it down the bank like a loon) and 0.10mm line to a size 20 hook.

Next time I fished the canal there'd been a few frosts so I decided on a lighter approach with groundbait and pinkie down the track. Didn't get a bite in the 4 hours I was there. I blame the weather and the fact there's not many gudgeon or small roach to be had on this stretch. I think it was even too cold for the Perch. Shame really as I've now pretty much written off any cold weather fishing there.

This left me looking for somewhere I can still catch and I found the answer in Bells Mill Fishery. This will be my haunt for most of the winter. I'm fishing it on the peg in front of the Cafe where I think there's a bit more depth. Tactic is cage feeder with double red maggot on a size 18or20 Drennan Wide Gape Carp hook to 0.10mm hooklength. First time I fished it was the first heavy frost of the year. I went in not expecting to catch much. It's full of fish but surely the weather would have taken a toll. First cast and the tip goes round. Ended up with 35 F1s and 2 small Tench! Was pleased with that considering, and it gives me somewhere I can still catch.

Next time I went there and fished the same peg, same method, but there'd been a few more frosts. This time the F1s had stopped feeding and I ended up with about 30 small roach and skimmers including a nice bonus 1lb Rudd. Not great, but not enough to put me off trying there for a 3rd time earlier this week. This time I had about 40 fish, mostly roach and skimmers but also 6 F1s and a small Barbel.

I love fishing the tip and even though the weights weren't saying much, it's enough to keep me busy and a steady pace of fishing during the winter!

Hope all have been well. Tight lines!

Oh. I forgot to mention a day at Sion Farm, a venue I was hopeful for providing some good Winter Roach fun. I'd heard there were some successful Silver League matches held there. Was a cold day and all three on the pool nearest the car park blanked. Not a touch on single maggot which is surprising as there's tons of roach in there in Summer. Someone on the pool at the back was catching roach and skimmers.

Glad to see you back was wondering where you had gone! Good to see you’ve got out, the successful canal session sounds particularly nice. I haven’t got out in nearly 2 months due to consistently high/flooded rivers and high/ridiculous winds!

Interesting what you say about about the sion farm roach as my local Stillwater is very similar. You’d struggle to catch less than say a 10lb bag of them March to October with 15lb plus average and pushing 20lb very doable yet in the winter you would think there was hardly any fish in there. Some of my Thames stretches can be like that in the winter as well but it’s a bit more plausible on a river but no idea where they can go on a stillwater!

Thanks mate. Hope all is well with you. Yep, Sion was a bit disappointing but should pick up with the weather again quite quickly I hope. That one canal session was good, I think that was at the end of October. It's not the best stretch of canal anyway, mainly perch so the Chub was a nice surprise.

Bells Mill is where it's at for me for the foreseeable. I don't mind even a bag of 30 roach and skimmers on the feeder when it's freezing. The F1s don't fight much in winter either so it's nice peaceful fishing, especially when you have the lake almost to yourself and the chance of bonuses like a little Barbel or Rudd.

This weather has been a right pain for sure. As I’m not into big pits or overly commercial places 90% of my fishing is on rivers or my local stillwater so with the latter a waste of time in the winter and the rivers a mess my options are few and far between at the moment. Got the best part of two weeks off over Christmas so hopefully I’ll find a couple windows of opportunity then as I’ll be able to pick my days more freely than usual.

Bells Mill is technically a commie as dug out and heavily stocked, but a nice small lake that's well managed with quality and variety of fish. So for me 35 F1s for probably 20lb was almost a red letter day at this time of year, even if a few weeks earlier matches had topped 100lb. In summer it's a bit too easy for me but in Winter I find it just about right. It keeps me on the bank anyway. The other place I could fish is Furnace Mill which I think I might try for a spot of feeder fishing this Winter when it stops raining anyway!

Interesting you don't like big pits though, that's some of my favourite kind of fishing.

Not so much don’t like them just the ones around here are very carp oriented, eg linear and linch hill. Nothing to stop me having a go for other species there I guess so maybe should have a go at them.

Understandable. I'm was thinking of a few Bream venues really. I'm thinking about heading to Furnace Mill tomorrow. Just checked on their website and...

GROUNDBAIT: we only allow Sonubait and Angling Bait Company groundbait.

Think a trip to the tackle shop might be in order, just can't decide if I can brave the cold or not.

This is my groundbait mix for tomorrow at Furnace Mill. I still get excited mixing it up the night before.

Going to be 50/50 of Sonubaits Green F1 and some Black Lake I had leftover. 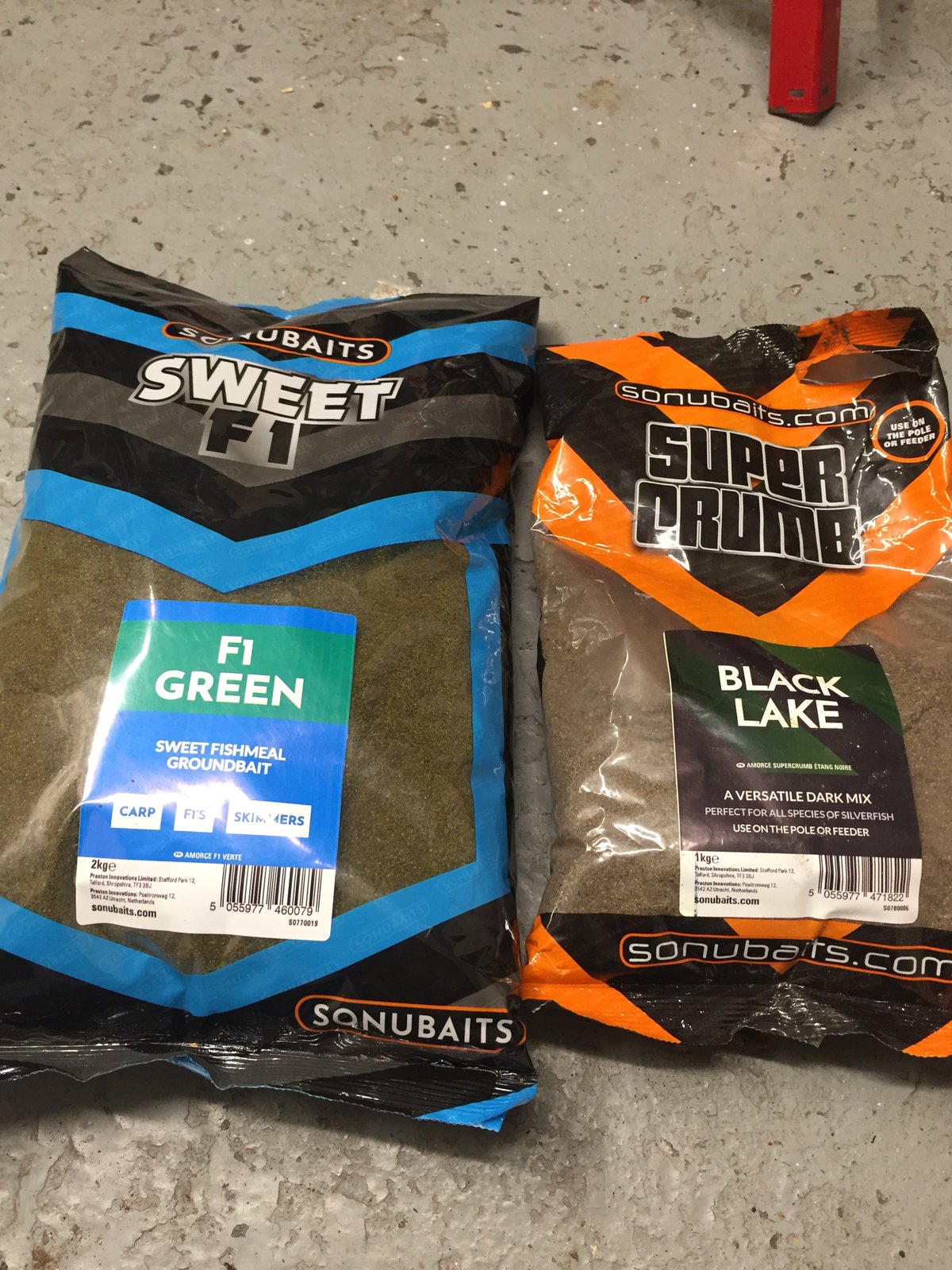 It's going to be cold so I only got a pint of maggots and half of pinkies. I like mixing the pinkies with the groundbait at this time of year even on commies, gives them something to root around for. And a bag of micros I'll buy from their shop as fishery pellets only.

Maggot on the hook and not much going in through the feeder.

Fished Furnace Pool casting to the bouy/aerator on the feeder. Could catch a micro Roach every chuck on maggot. Sat it out on corn for a while but no bigger fish showed all day. Too cold for them!

At least you caught and there’s no such as a bad roach especially in winter, well unless they were literally bleak sized maybe but it’s still catching!

Yeh they we're 1oz fish for the most part with a few 3oz fish thrown in. All quite small. But like you say it's catching and would prefer to be on the bank than not!

They can be a bit of a nuisance in Summer. Means you can't really fish maggot there.
N

Silverfisher said:
I find it’s quite rare to catch roach much under 3oz so you’re probably right that nothing else was feeding
Click to expand...

Hi Silverfisher, is that in general or on a specific venue?
the venues I fish have plenty ... in fact fish over 3oz are a real weight builder!
great Ouse, warks Avon, grand union (most canals really)

having said that ... catching 30 to the pound blades on the tip is not my idea of fun!!

Yeah mainly specific to the Thames and my local Stillwater, general range on those is 3-8oz with probably 4oz average, maybe 5oz some days. You make a good point on the Avon, the Ouse and canals, I have had a fair share of tiddlers on those with 3oz plus a reasonable fish. Particularly on the Ouse where they’ve all been small whereas as I’ve at least had a few respectable ones on the Avon and canals amongst the blades.
N

example on the Ouse, last weekend at Olney ... for the first 4 hours of the match nearly every fish was a tiny roach ... last 45 minutes I picked up a few better stamp of 3-5 oz. ended up fourth.
equally, when you get on a shoal of proper Ouse roach it’s lovely ... albeit that a pound fish is a large fish in my (40 years) experience on the Ouse above Bedford.

30 years ago when I fished the grand union a lot, the target fish in matches were ounce roach using squatts Or punch. The good anglers were the ones who worked out how to feed to catch the ounce to two ounce fish rather than the half ounce ones.

Welcome back @Zerkalo , if temperatures pick up or stabilise don't neglect a go for the Barbel mate.

Thanks mate. Hopefully get a few sessions in on the Severn before close season.

Yeah the bleak can be a pain at medley and Sandford but the roach and perch tend to be of a good stamp, can build a weight quite quickly at an average of 4 to the pound with the odd bonus fish.

I had a session at Olney back in February and had a similar experience to you, was just dozen to the pound roach and dace most the day then the last hour or so more like 5 to the pound.

A long slow day but a few nice fish