A Dull Old Day at Dromonby

Match 14 of the season and a return to Dromonby Farm Fishery near the village of Kirkby in North Yorkshire. I don’t know about the rest of the country but we had a very wet, Saturday up here, especially after dark - over an inch of rain falling on some spots – and on the short drive to the fishery there were flooded fields everywhere and a couple of stretches of road that were also flooded. The River Leven was in the fields downstream of Stokesley and even the tiny River Tame was a raging torrent at Tanton.

The rain had all but ceased by the time I arrived at the pond – I don’t recall ever seeing it at a higher level and it was chocolate brown. It was also, as I discovered when trotting round to peg it out very soft and muddy under foot. I had twelve names pencilled in for this match and if all had turned up it might have been a bit tight, especially in the corners but, presumably the weather and the less than wonderful forecast put a couple off and Barry & Rob B never showed. The rain returned whilst carrying out the draw but fortunately it was only light and only lasted an hour or so.

Peg 7 was to be my home for the next few hours, it’s on the north bank of the pond which would mean that the, fortunately, not particularly strong southerly wind would be blowing straight at me. I couldn’t really target the island from this peg as I’d be casting across peg 10, so I concentrated on two pole lines - straight out at 8m and a margin line to my left. First put-in on the 8m line I missed a bite but the following chuck I connected with a bite, resulting in a tiny roach entering my keep net. I was getting very small roach at intervals, it wasn’t fast & furious, nor was I amassing a great weight but there didn’t seem to be a great deal else getting caught so I persevered.

Rob around on peg 9 hooked and landed a chunky carp of 3lb odd, so I changed tack a little and had a look over the margin line I’d been drip feeding with chopped worm and a few pellets since the start. With half a dendrobena on the hook I snared a couple of better roach (better as in 2oz) and then hooked a carp which kited around in a big circle before the hook pulled – presumably foul hooked. I stuck at the margin line, probably for longer than I should have, and got a couple more roach and a carp – unfortunately very much of the junior variety and about 3oz.

There were odd carp coming out here and there, Rob had another, Steve got one on his favourite pink wafter, Kev finally snared one too and the rumours had it that Paul, who I couldn’t see, had had a couple from peg 11 . The breeze I mentioned earlier was having one unwanted effect – every leaf floating around the pond (which was a considerable number) was slowly being propelled to the windward bank – where I was sat.

I couldn’t drop the rig in without fouling a leaf – although I did get a couple of rudd when the line got hooked onto a leaf and presented the hook just a foot down. After an unsuccessful 30 minutes on the feeder I cleared the leaves I could reach with my landing net and commenced fishing just with a top 3 - well it was either that or 13m and fetching half ounce roach back from that distance ain’t my idea of fun. I caught a few more silvers but nothing of any note and didn’t think I’d have beaten many.

Kev weighed first and his one bite, one carp weighed 3lb 7oz 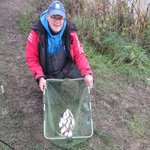 Finally Peter was in the other corner peg 12 – usually contains a few carp in the summer but not, apparently, in the winter so he only tipped 1lb 12oz of silvers into the weigh sling.

Next up we’re on the Tees down at Bowesfield, hopefully there might still be a skimmer or two about

Me too - keep them coming Simon

Ditto - excellent report Always a pleasure to catch up on the antics of your crew.

Think your mate Rob needs a puller kit or longer arms. ??. Nice back drop to the fishery. I bet it's a nice place to fish in the better weather.

You should book some silvers matches at Grange Farm Simon, I would book in as a guest every time.