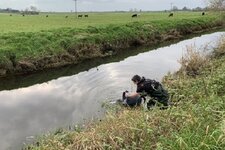 The River Sheppey gets a Christmas stocking of fish

The Environment Agency has restocked several fisheries in Somerset, the Claverton fishery on the Bristol Avon near Bath, and the River Boyd at Bitton, near Bristol.
Every year, the Environment Agency’s Calverton Fish Farm near Nottingham breeds coarse fish for release into rivers and still waters across England to help boost fish populations.
Fisheries Officers have stocked over 6,000 fish, including 1,500 fish into the River Sheppey near Godney, and 1,100 into Blakespool, a coarse fishery used by Blakespool Angling Club in Bridgwater. 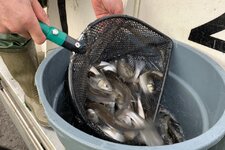 Some of the thousands of fish found new homes

Other sites to receive a festive boost in the run up to Christmas include Crossman Pond near Yatton, Crookwood Lake near Devizes, the River Boyd at Bitton and Claverton on the Bristol Avon near Bath.
The rivers and stillwaters have been stocked with various species including chub, roach, tench, barbel, dace, rudd, bream and crucian carp.
The River Sheppey lost a large number of fish following a pollution incident in 2018 and all other fisheries were stocked to enhance angling.

Somerset boasts many angling clubs which is evidence that there is a healthy amount of fish in the county’s waterway. But occasionally a helping hand is needed to restore the natural balance in the wake of an incident or decline.

The work of our National Fish Farm is funded by income from licence fees, so in the lead up to Christmas it’s great to see the fish farm continuing to produce strong and healthy fish needed for re-stocking and recovery.

The restocking is part of an annual programme funded by income from rod licence sales. Restocking occurs in winter because water temperatures are low and this minimises any stress on the fish, giving them the best possible survival rates.
Click to expand...

Restocking is done where numbers are low, have been depleted following a pollution incident or to create new fisheries and opportunities for anglers.
Christmas is a good time to introduce the fish into rivers, as it enables them to acclimatise to their new surroundings, ahead of their spawning season in the spring. Fish also play a critical role in sustaining a river’s finely-balanced eco-system, so the wider natural environment will also get a festive boost.
You need a rod fishing licence to fish for salmon, trout, freshwater fish, smelt or eel with a rod and line in England. Get yours from https://www.gov.uk/fishing-licences.